My bike trip will start in Ha Long, the city where my collegues and I live and which is located along the shore of the world famous Unesco World Herritage Site Ha Long Bay. A few years back I’ve attended a presentation of someone who cycled around the world and showed pictures of the characteristic tower karst limestone rocks, covered in sub-tropic vegetation and rising up from the water. At that moment I could only imagine what it would be like cycling here, not knowing that I would end up living here.

So when I first heard that I would relocate to Ha Long, my expectations regarding the natural beauty were pretty high. However, as it turns out, Ha Long is a place with multiple faces, one prettier than the other. There is no doubt that the nature surounding Ha Long is absolutely stunning, but it co-exists with a city which is dominated by industry and tourism. The city once started out as a small fishing village. When the French came they found coal and started mining for it, leaving deep pits in the landscape around the city. The coal also attracted electricity plants that run on coal, providing electricty to the region. All the digging for and burning of coal results in a city that is covered in a fine layer of dust, causing the scenerey to look a bit pale and grey.

At this moment Ha Long is rapidly modernizing. Vietnam’s economy is growing at a steady rate of almost 7% per year. The economy runs mainly on agriculture and the mining industry, but it’s currently also developing its tourism industry on a rapid pace in order to get to the same level as countries like Thailand. This means that a lot of construction projects are currently underway, which is very noticeable in a place that provides the main access to a Unesco World Heritage Site. The Vietnamese are building hotels, resorts, express ways, airports, modern housing complexes, malls, theme parks, giant ferris wheels, world-record breaking cable cars and even beaches to attract tourists. Next to this they are modernizing their roads and utilites throughout the entire city, bringing all electricty cables underground en renewing their drainage systems. All this building, demolishing and digging enhancess the paleness and greyness.

But nature is not very far away. With my bicycle it takes me about 20 minutes to reach the ferry to Cat Ba Island on which you get the feeling that you could walk into an extinct preshistoric animal any minute. And to the north I already found a valley with some nice authentic villages. Unfortunately the peace and quiet of this valley is brutally disrupted at multiple places by the construction of a new highway. So I really hope that if I go north a little bit more, that I will get the opportunity to experience true Vietnamese rural culture, free from dust and vibrant with colour. We’ll see! 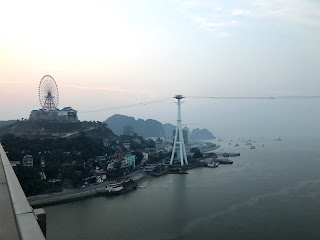 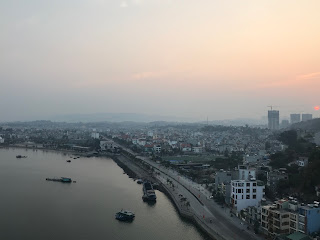 …and vast stretches of housing. 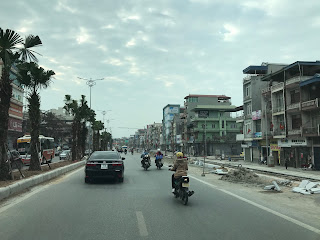 But the city is undernconstruction, and dusty. 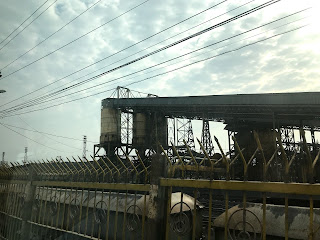 And the city has heavy industry, colemining. 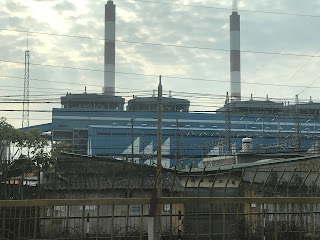 There is no gradient. Housing, nature and industry are mixed. 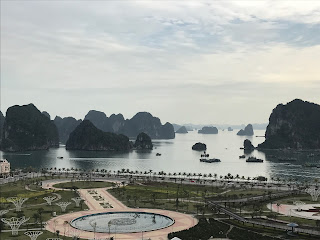 But the nature part is abssolutely stunning! 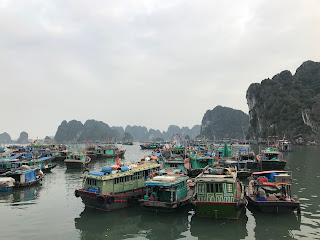 With all the colourfull fishing boats. 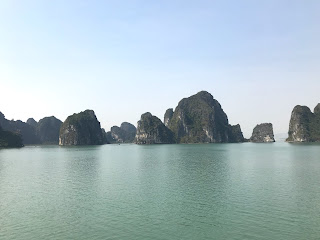 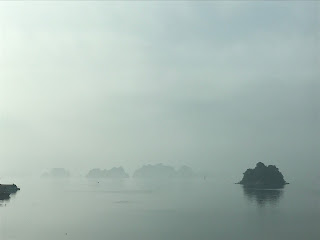 Which become mystical when it’s foggy. 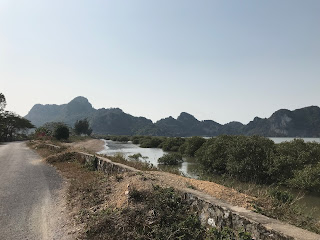 And then there is Cat Ba Island. 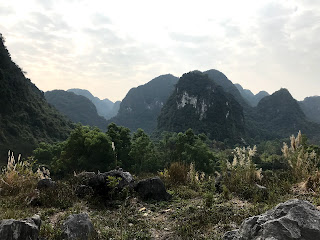