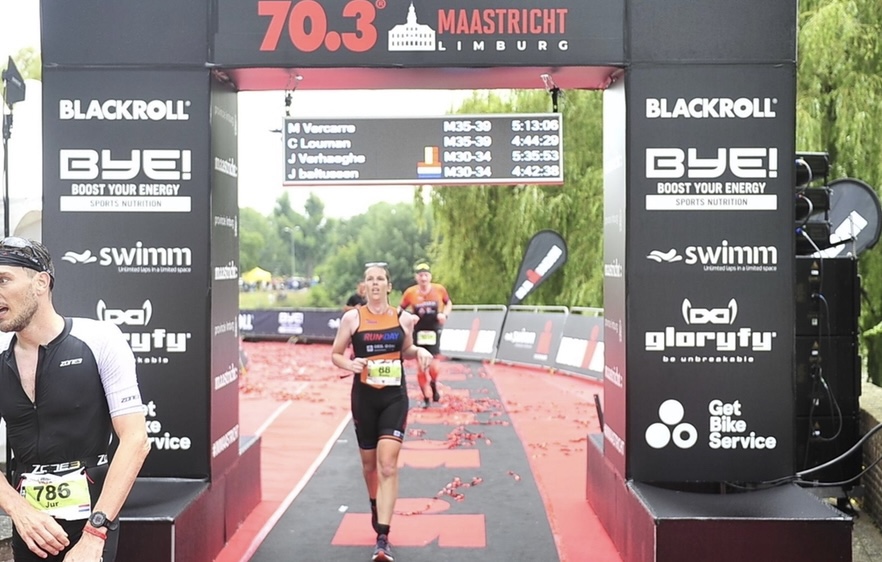 I haven’t done much bike touring since the end of April, because I’ve been preparing for my first ever half triathlon ☺️ a back to back 1.9k swim, 90k bike ride and 21.1k run 😳 When I subscribed for the event at the beginning of May, Covid numbers in the Netherlands were down and vaccination rates were up, so the organization of the event was quite optimistic that the event would actually happen on the 1st of August. So with a positive mind I subscribed ☺️

However, between then and yesterday many things happened: covid measures were eased quite drastically, then covid numbers rose drastically again and new covid measures were imposed 😢 The Dutch government cancelled all “events” until the 13th of August. However, it remained unclear for some two weeks whether sporting events like the Maastricht triathlon were also seen as “events”. And then, on the Wednesday that I received message from the organization that the event would not be cancelled due to Covid, Maastricht and it’s surroundings were hit by the worst river floods since 1993. So even though the event would not be cancelled due to covid, it could still be cancelled due to the floods 😢

However, last week all participants received word that the event would actually happen ☺️ Unfortunately the night before the race it was communicated that the swim would be cancelled due to the still very strong currents in the river. The 1.9k swim was replaced by an additional 5.3k run at the start of the event, turning the event from triathlon to a run-bike-run. It was a bit of a disappointment because over the last few years I’ve worked so hard on my swimming. But of course I understand safety comes first.

On Sunday morning 9:14 I started the race with quite some nerves. 😳 I wasn’t too happy that the race now included a total of 26.4k of running 😳 And even though I know what it is like to ride my bike for 90k and run half a marathon, I just couldn’t really imagine what it would be like to do those back to back 🤔 I figured it surely must be as hard as it sounds 😂

The first 5.3k run went by really fast. I struggled a bit during the transition from the first run to the bike, because I’d forgot to undo the shoe laces of my cycling shoes prior to the race 😂 I have lost a few precious 2-3 minutes there, fumbling with my shoes 🙈

The bike ride went amazingly well. The hills of Limburg provided some beautiful scenery and my legs just hammered away while lying comfortably in my aerobars and enjoying the cheers of the crowds ☺️ The uphills were slow and hard but the downhills and the flats were insanely fast ☺️

Transition to the 2nd run went a lot smoother and at the start of the run my legs actually felt pretty solid ☺️ A few minutes into the run I passed a bus stop and found that it was 12:50, meaning I had been at it for 3 hours and 36 minutes at that time 😳 which I found quite insane. It meant I did about 6.3k of running, 90k of cycling and two transitions in just over 3.5 hours 😂 It provided me with a positive vibe ☺️

I took the last 20k of running quite slow and stopped for drinks at the aid stations. I passed the 5k mark, still fresh… 10k mark, still fresh and enjoying the growing crowds. Just after I passed the 15k mark my side started stinging and I walked a bit, alongside a fellow who was feeling the same pain 😂 We both said cheers to a cup of iso and wished each other good luck on the last 30 minutes of the race. The sting subsided and I ran the last 5k through the streaming rain. I made it to the 20k mark much faster than I expected ☺️ However, the last kilometer felt much longer than expected 😂

In any case I finished, making me feel quite happy and a bit surprised that it all went this smooth☺️ After finishing I collected my medal and my finisher shirt, ate some banana, drank some coke and collected my dry clothes. While changing into my dry clothes a thunderstorm passed over, soaking me to the bone, with only my survival blanket for some protection. 🙈

After the rain subsided I contacted my parents, who were quite relieved to hear from me. Apparently my time registration chip and online tracker had malfunctioned, meaning they had not been able to track me during the race 😢 It also means I have no formal time registration and that the results actually show the words “did not finish” behind my name 😢

My brother cam to find me and he brought me to my parents and sister in law on the Vrijthof. My mum had bought me some dry clothes ☺️ and my sister in law ordered me a big glass of white wine and my father had arranged a seat under the terrace heater ☺️ Thank you all so much for your support and a great weekend!

In the end I found out that I finished right behind participant 786, who finished at 14:51 So even though I do not have the exact splits for the different parts of the race, I do know that I completed the whole thing in some 5 hours and 36 minutes 😂😳 My main aim for this race was to finish. If I would finish, I expected to finish in some 6.5 to 7 hours 😳 That I actually finished and did it within 5 hours and 36 minutes is actually pure insanity for me 😂

I had a great weekend, with – again – many thanks to my parents and my brother and his partner! I really enjoyed it and I am quite amazed that I pulled it off 😂 Maybe I’ll do it again next year ☺️