My little brother and my parents were really enthusiastic about this thing: the Milford Sound, which actually is a fiord 🙂 So when I told my mum that I was going to New Zealand, she made me promise to visit the Milford Sound. And so I did that today:-)

A few days back I arranged the tour and made sure that I would be with a small group. Pick up was at 745, so I got out of bed at 700 and stood outside my hostel at 745… Together with 75% of all the other people that stay at the hostel. And other hotels on the street were emptying out as well. Everybody came out to be picked up to visit the fabled Milford sound. This didn’t start out too well 😦

Luckily the minibus that picked me up was just that: a minibus. So we were with a small group and because I was the only one traveling by myself, I got to ride shotgun 🙂

Along the way the driver/tour guide explained that due to a big storm a couple of weeks ago (the same one that had caused me to ride along the eastern side of the Alps instead of the western side) large parts of the road up to the sound had been washed away and that repairs were currently being made. For that reason busses had to ride in organized convoys, which would be let through at dedicated times (1000, 1230, 1430).

Our tour guide’s plan was to make the 1000 convoy. For that reason we skipped a lot of sights along the way so we would be at the convoy starting point relatively early. At the convoy starting point we got off the minibus and the tour guide took us onto a short forrest trail. At some point we came to a crossing and he said we could go left to the bus, or go right, see the river and then follow the track to the bus. So that’s what I did 🙂 together with some other guy, but without knowing that the track along the river would be 15 minutes longer… So because of me and this other guy, we ended up missing the 1000 convoy :-0 Making me into one of the two least popular people on the bus 😀 It’s good to know though that I’m not just good at messing up my own plans, but also at messing up those of others 😀

So we had to wait for 2,5 hours to be allowed on the next convoy. We had tea and scones at a mosquito infested place and then rode back along the road to see all the sights we skipped earlier. The sights were nice, but there were just too many tourists around. And after that, the ride towards the sound was really nice as well, but we rode in a single file of about 40 tourbusses. That’s just mental. Besides that my heart just wept, because the scenery was some of the best I saw till now. And I was in a frigging bus 😦 I would have loved to ride my bike there. It’s good to know that because of all the damage the road was closed to cyclists anyways….

After we reached the sound we got on board a boat and we toured the sound and it’s many waterfalls. And the scenery is just very dramatic. Big steep mountains that disappear into the clouds, and water falling of them. My mum absolutely was right in saying that I should visit 🙂 And I think it was a nice way to end the trip! Besides that I’ve been doped up on anti-motion sickness pills (2hours on a bus, 2 hours on a boat and 2 hours on a bus again will not end nicely for me, think Okavango Scenic Flight), and that provided me with a solid two hour sleep on the way back. On the boat I was struggling to stay awake though 😀

Good day! It did make me remember why I like riding my bike so much though 🙂 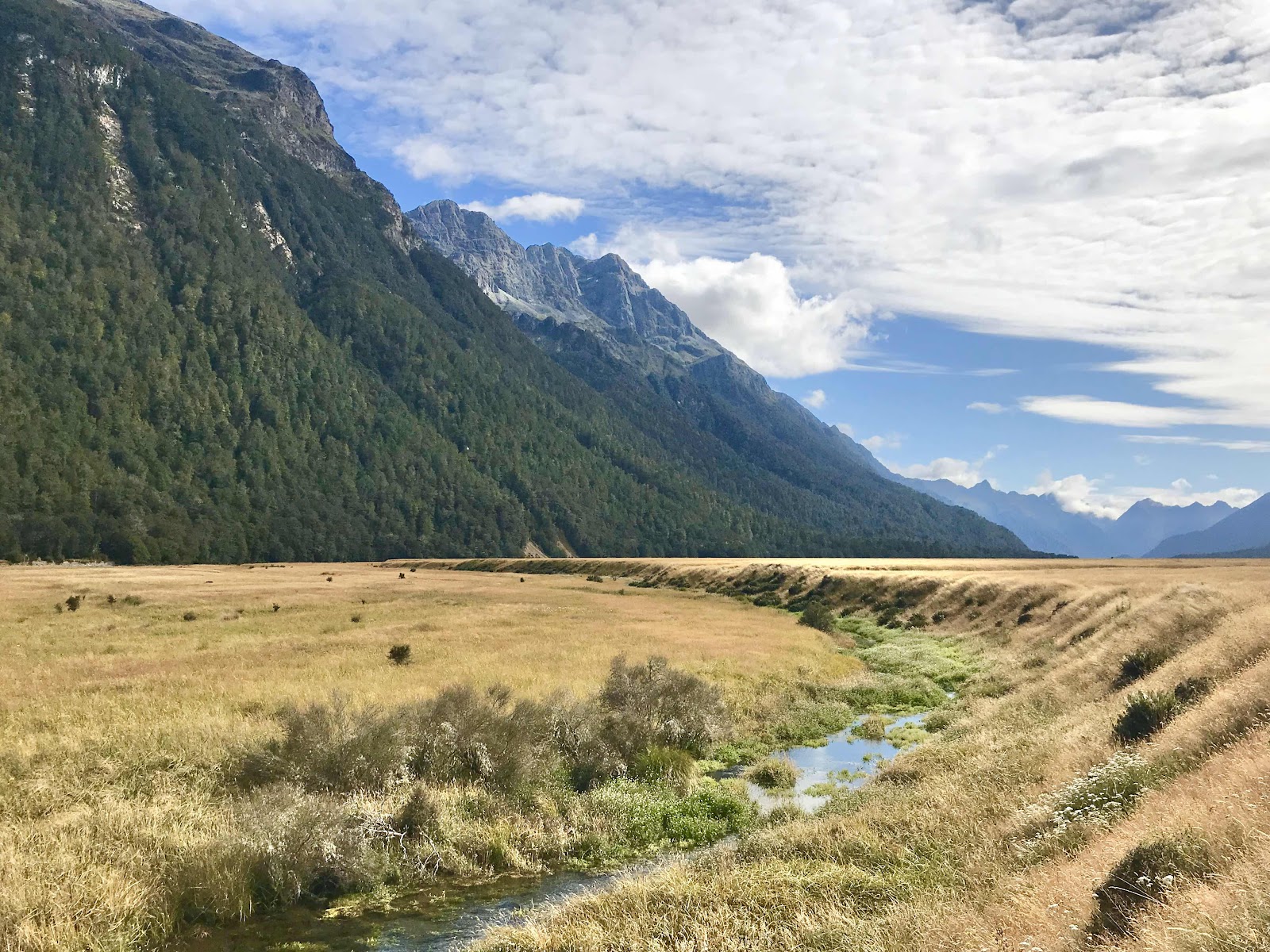 Scenery along the way was amazing! Would have loved to ride my bike here! 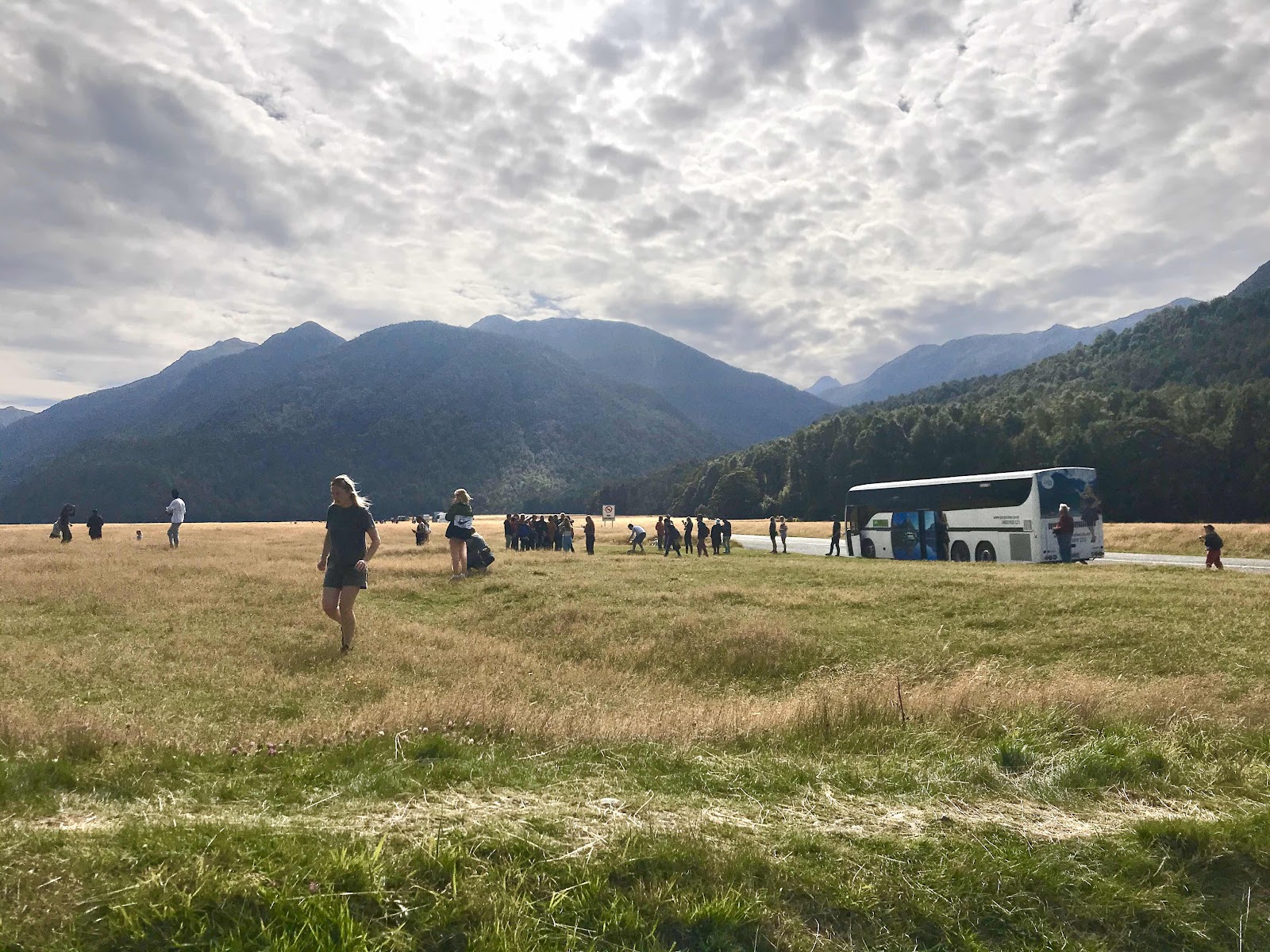 Because by bus you’re never alone. And fortunately I was not in one of these big busses… 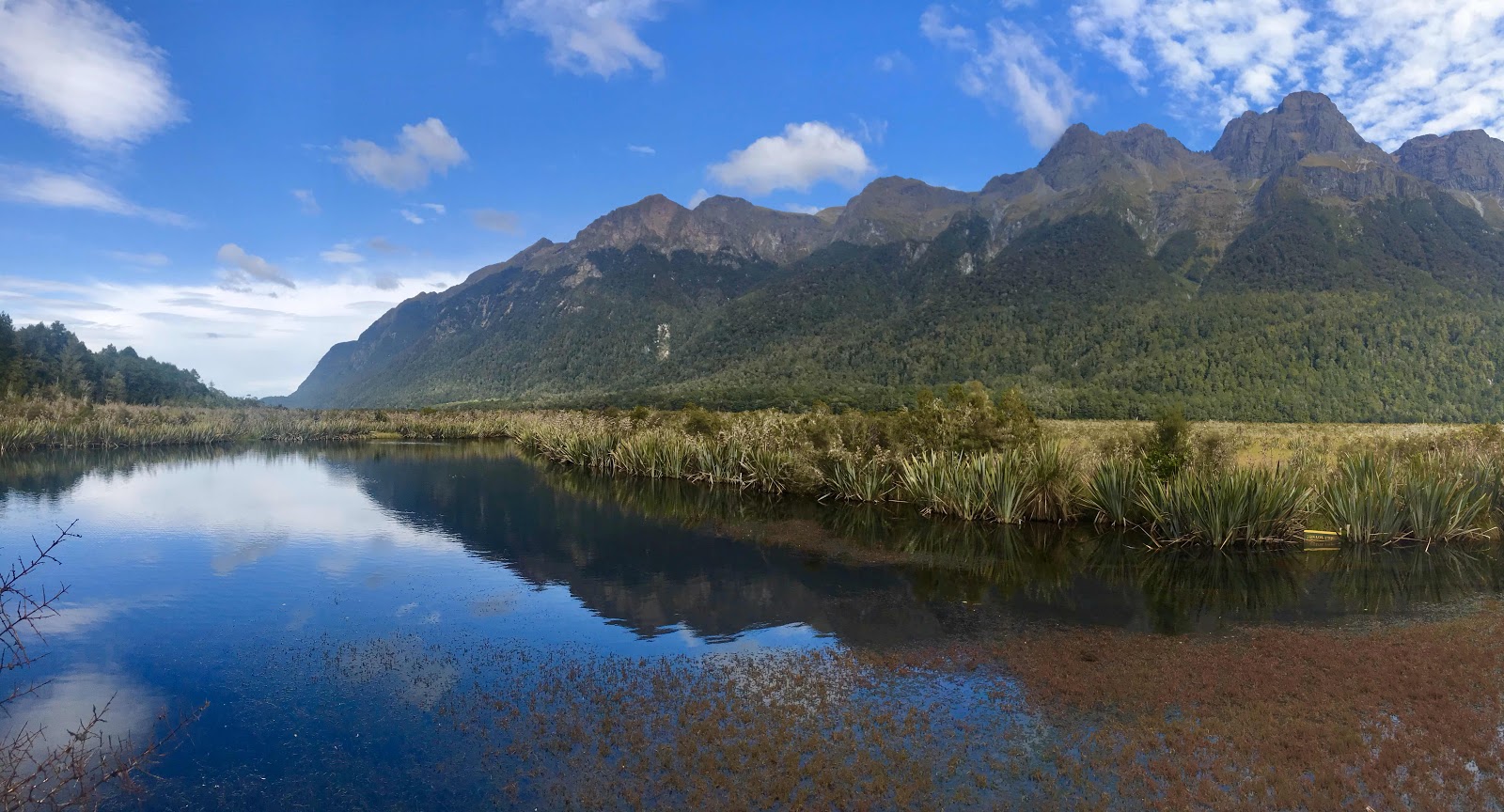 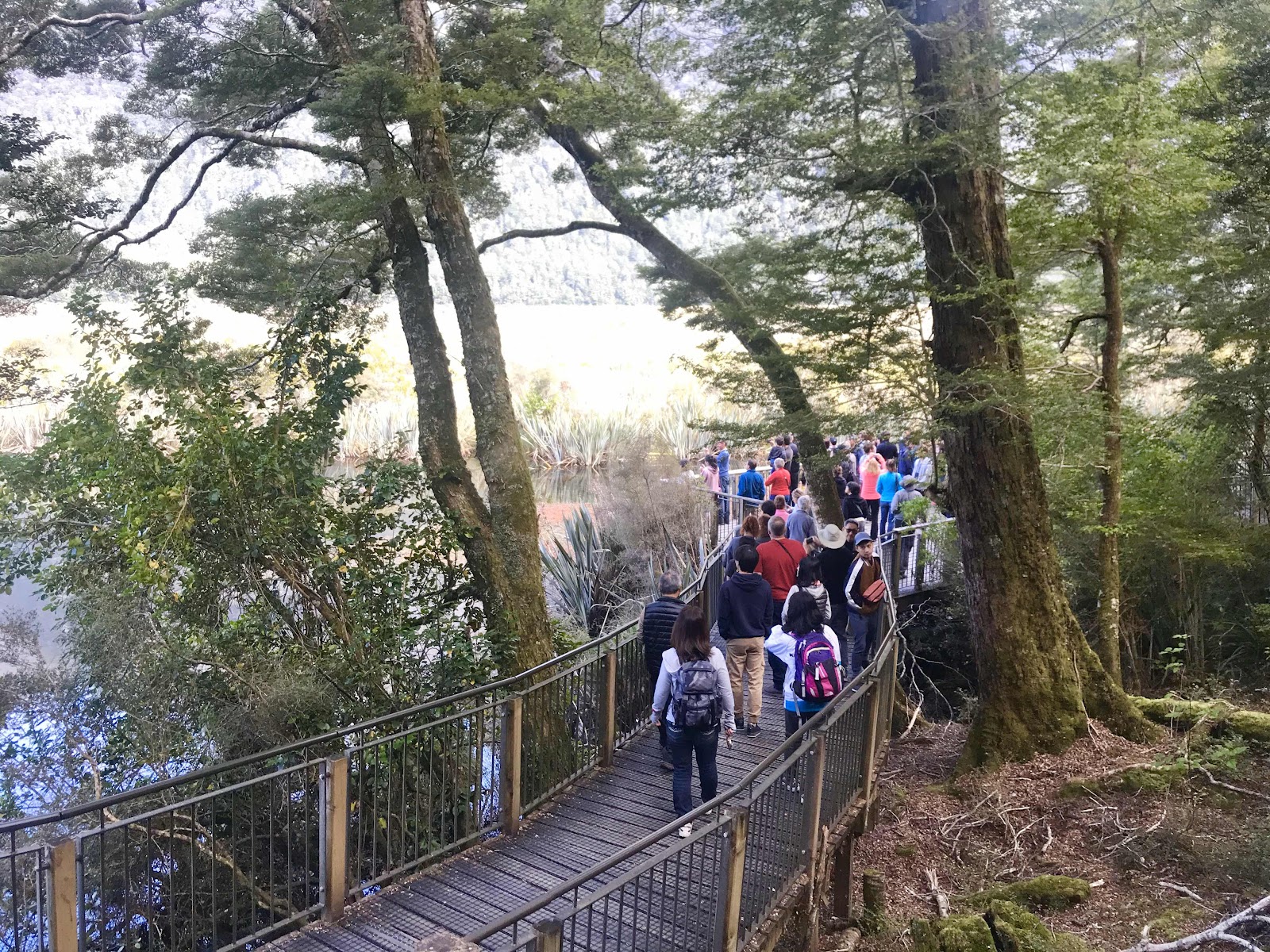 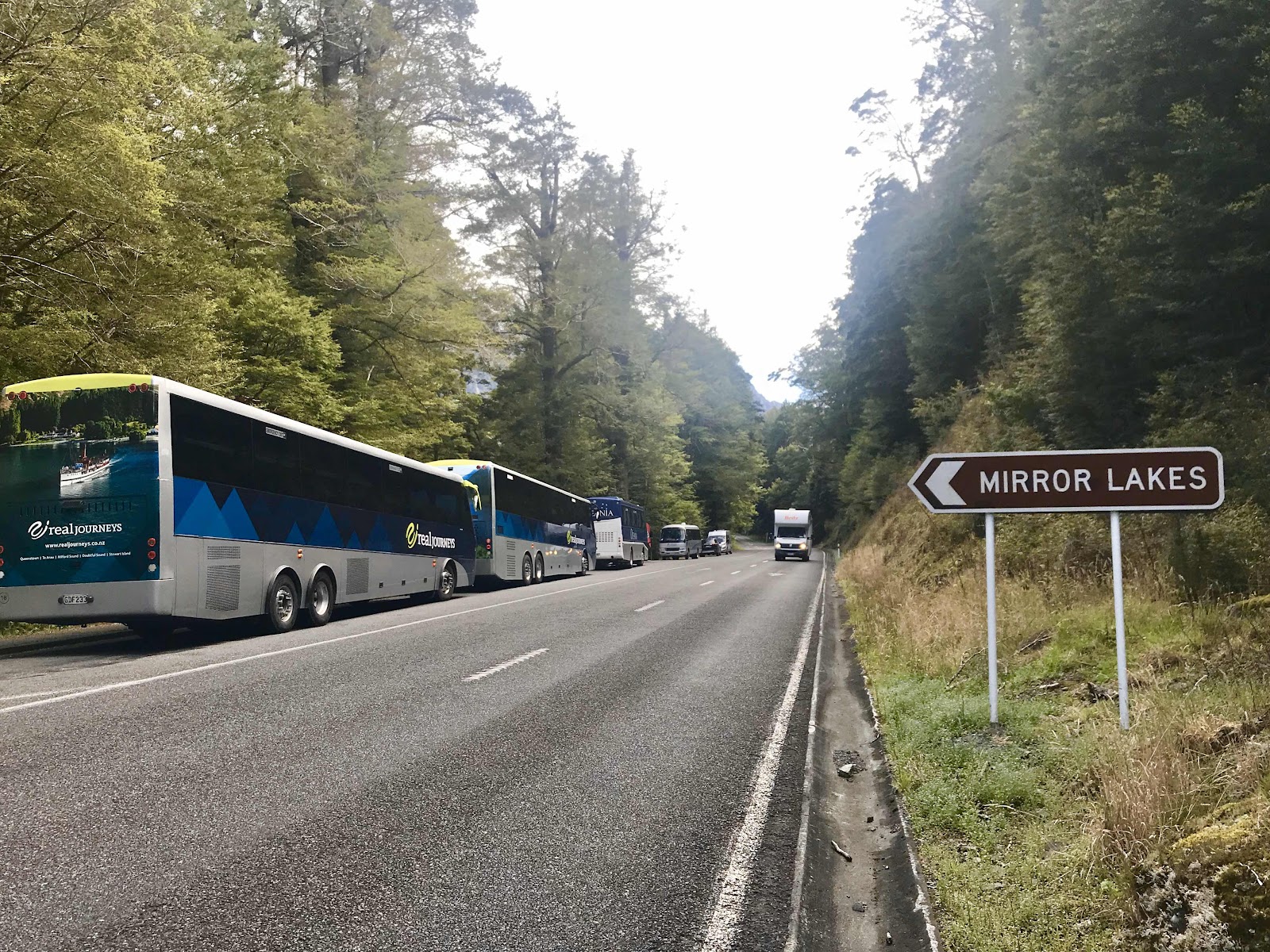 It is a true industry 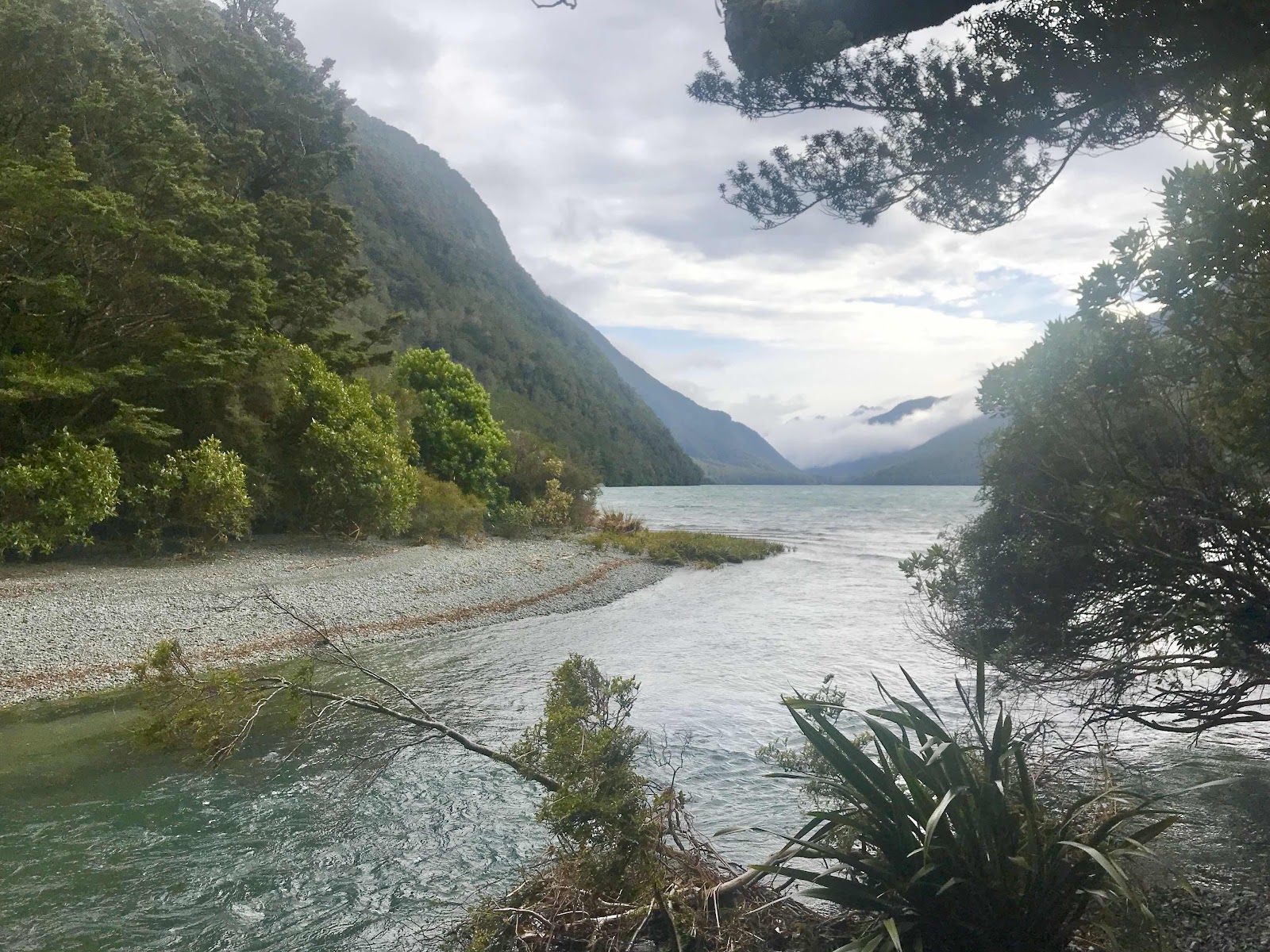 We got to see some nice places though 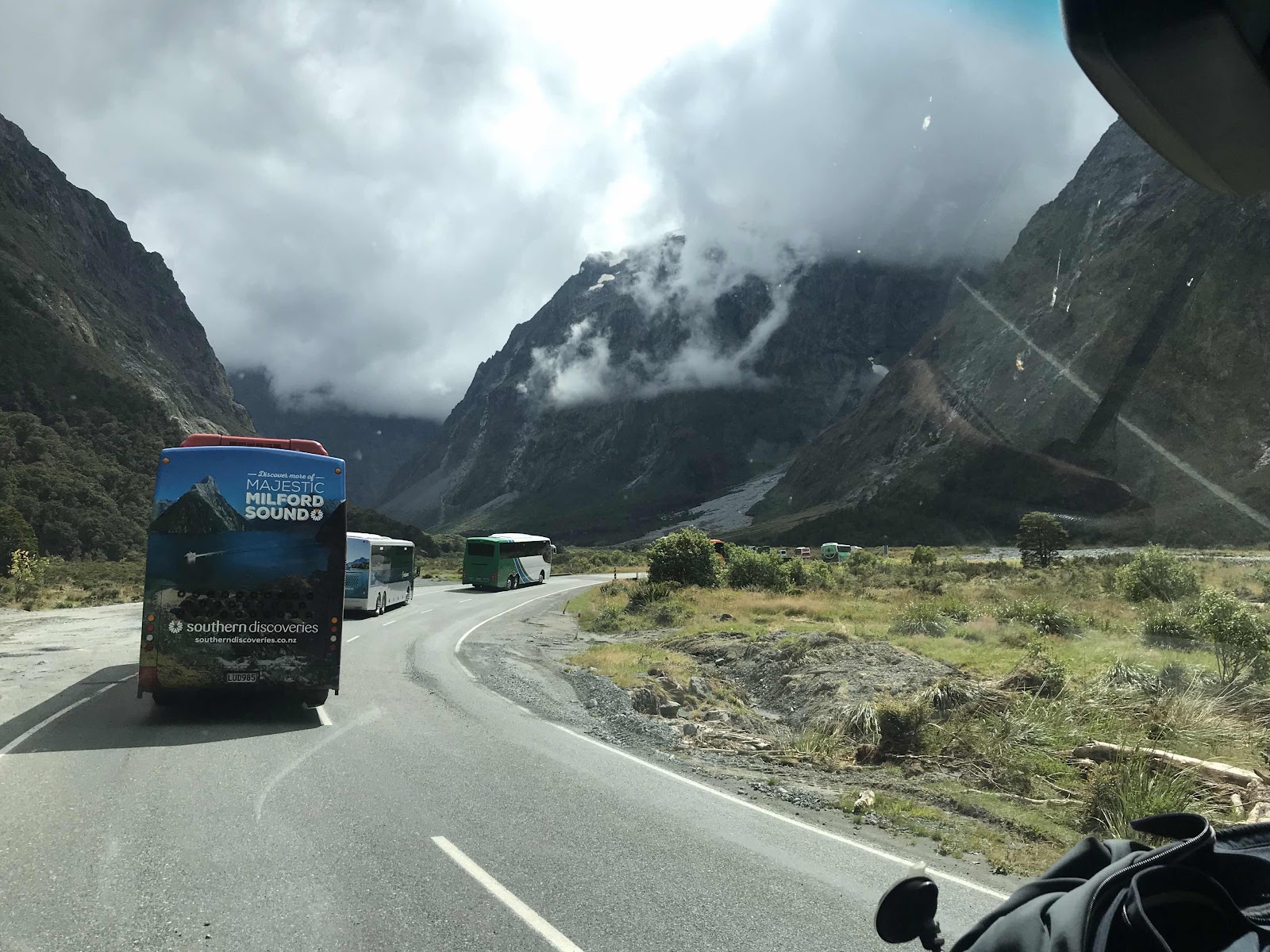 Riding single file to the sound! A lot of pleasure of cycling this road would have been killed by all the busses anyways, which drove like crazy… 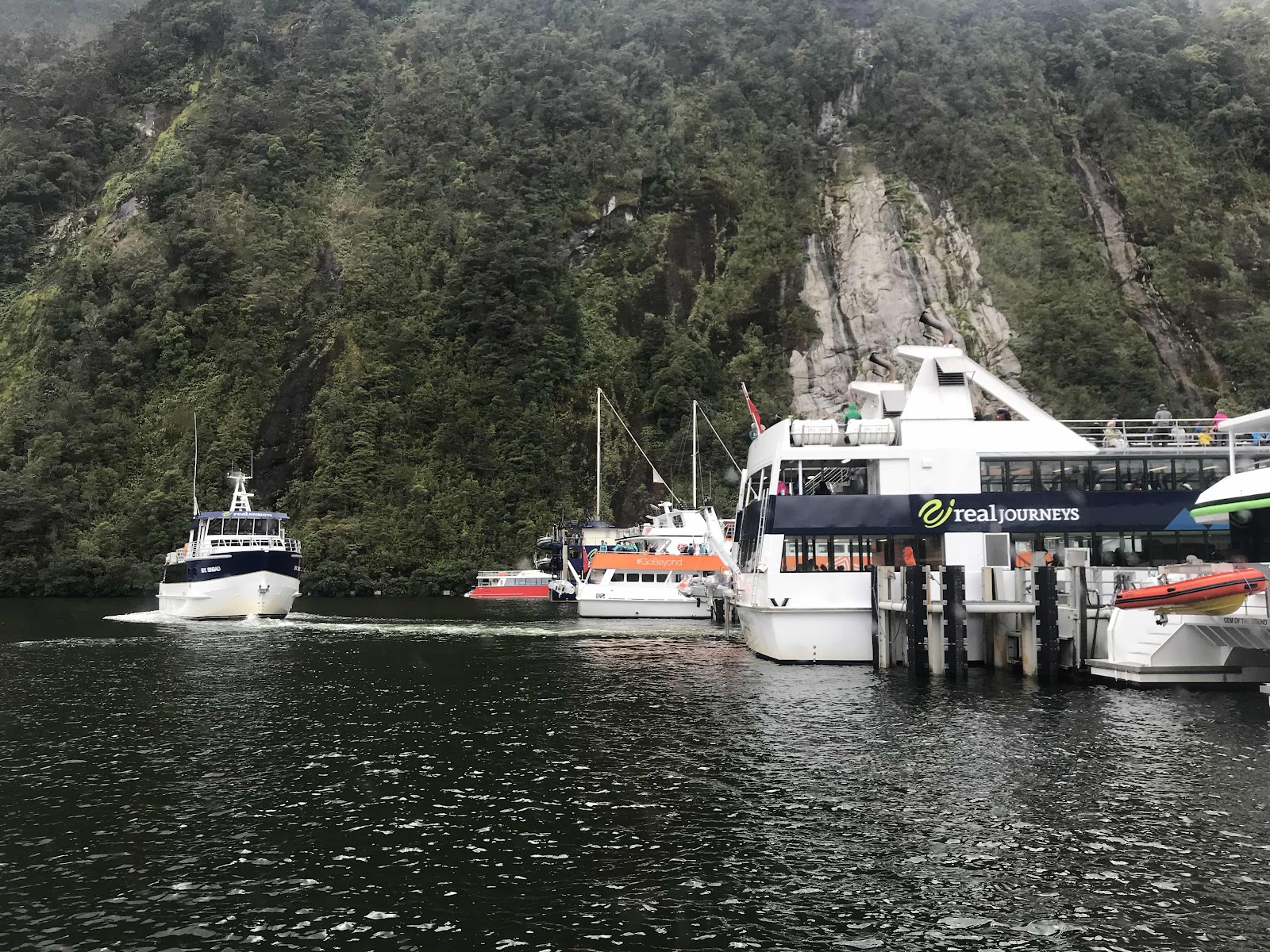 And from the busses onto boats 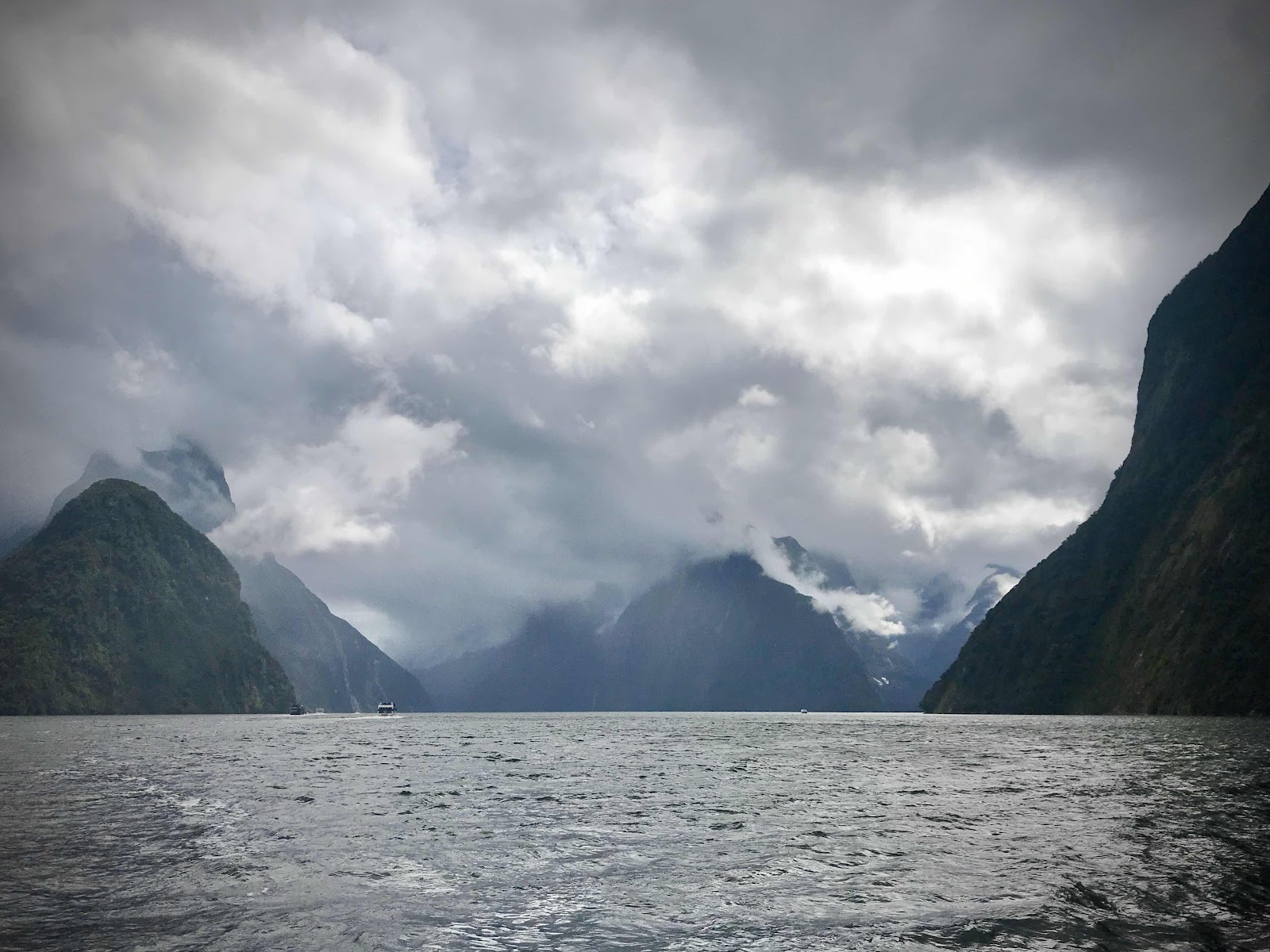 It was quite worth it to see the sound though. Very dramatic! 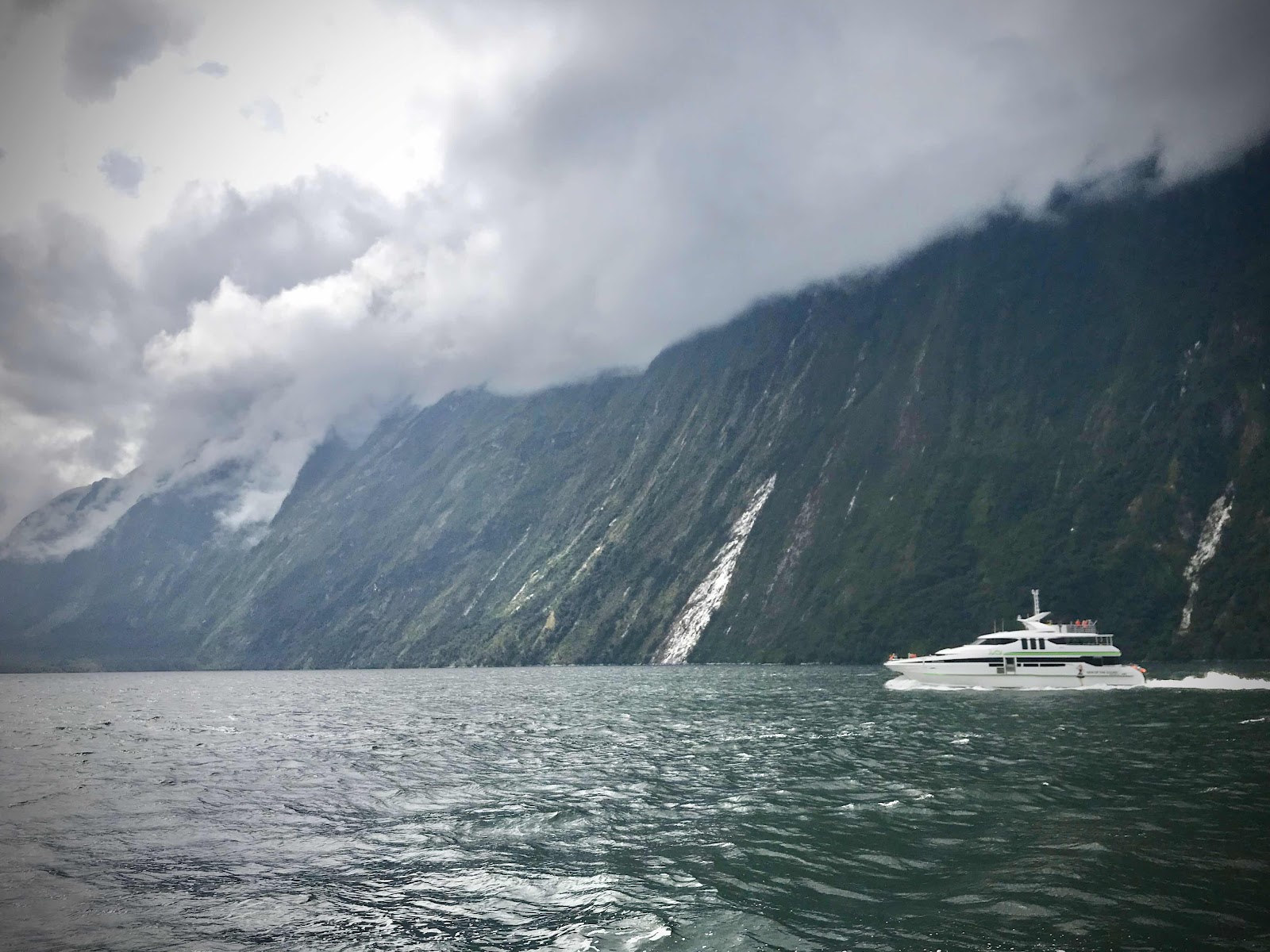 With all the waterfalls, and clouds, and steep mountains… 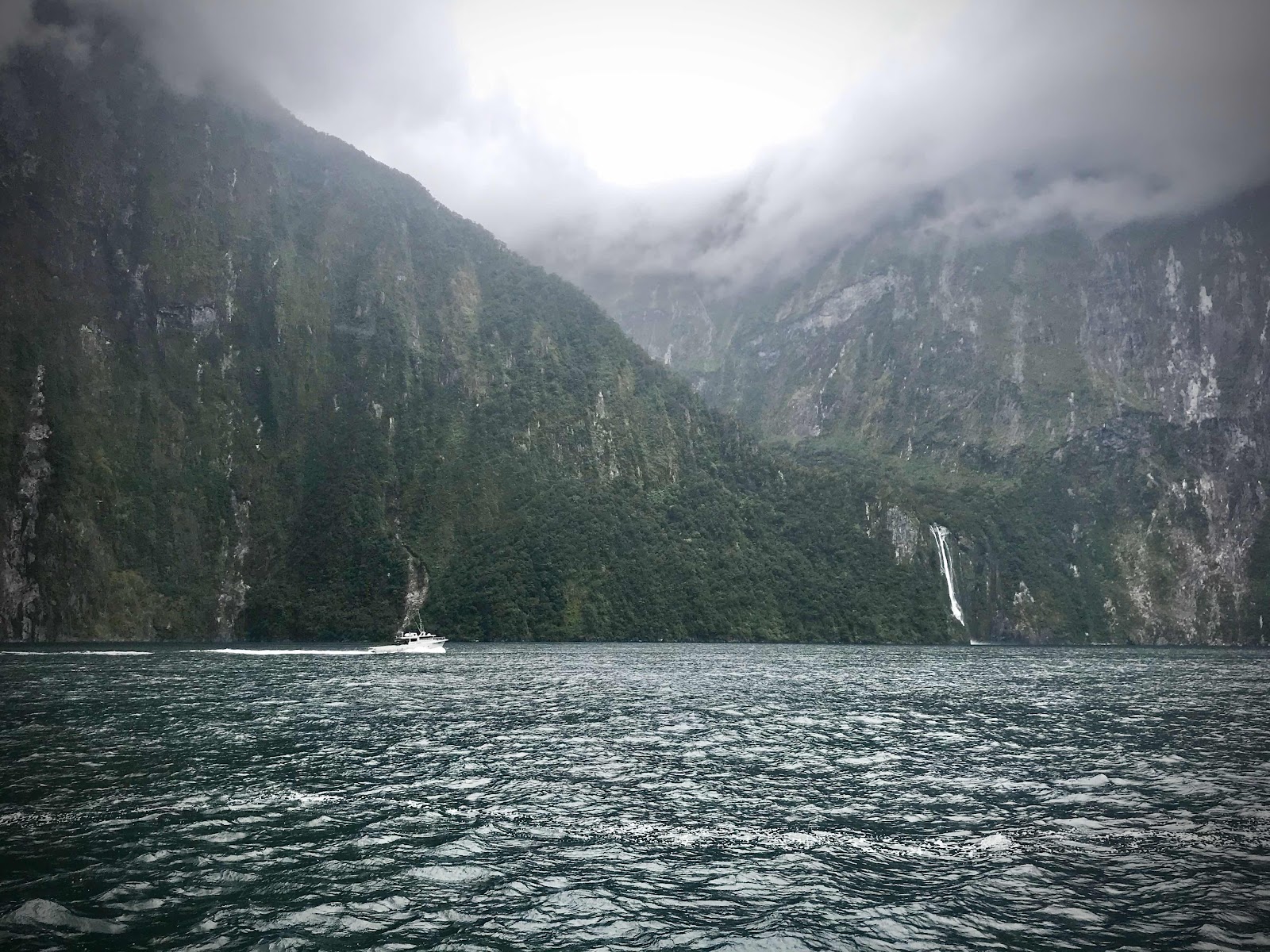 Carved out by glaciers 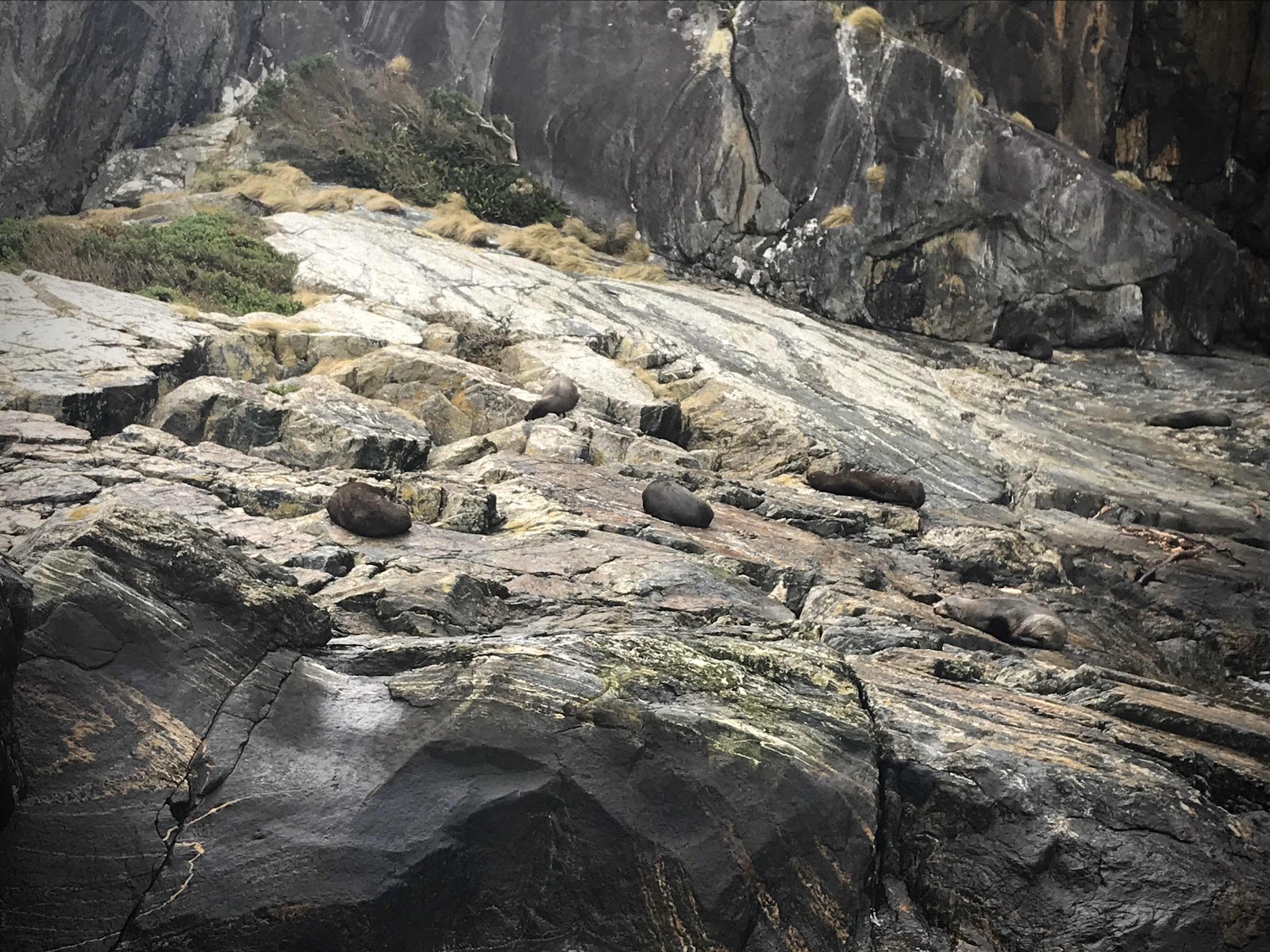 Can you spot the seals? 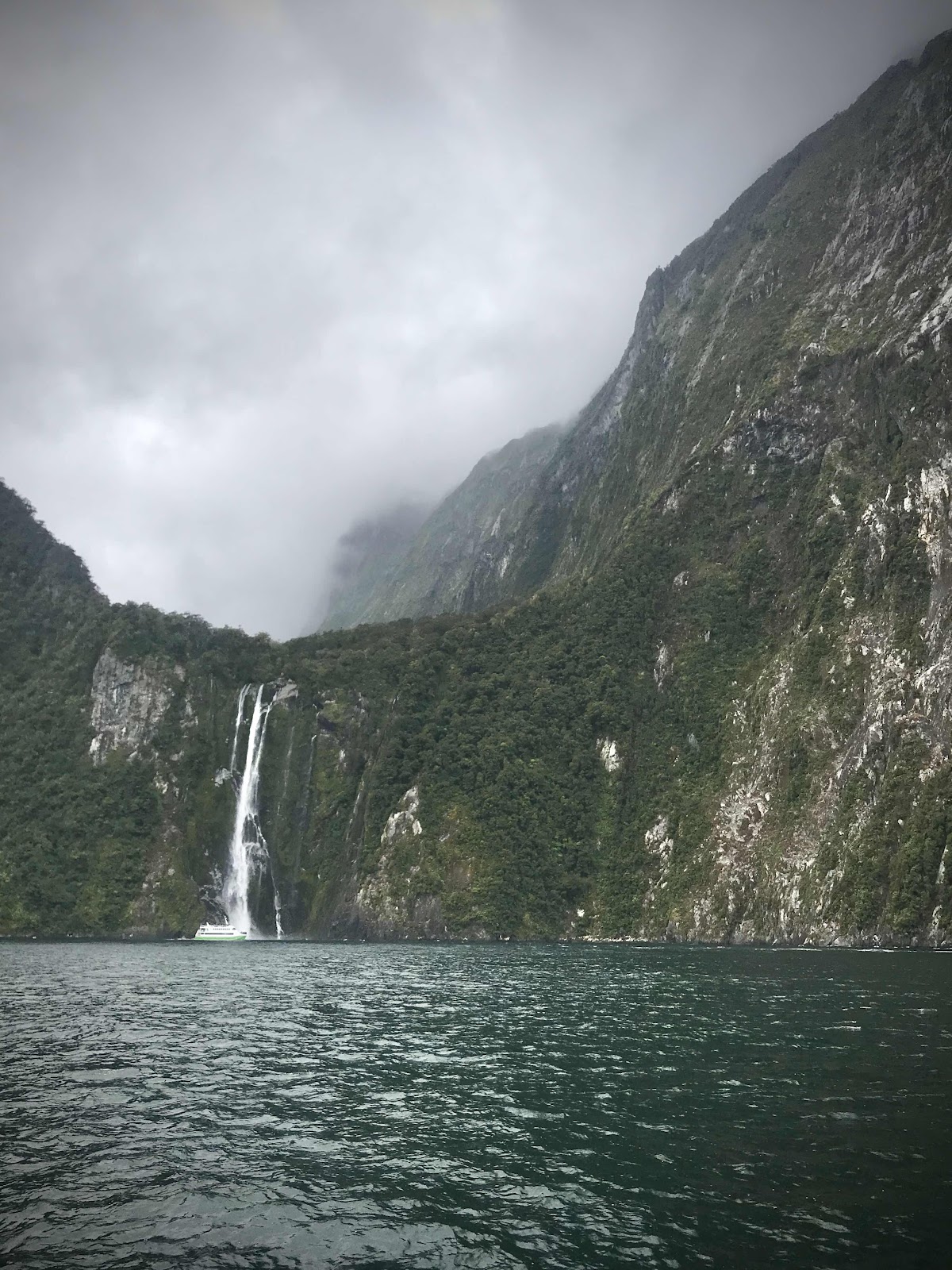 They look like tiny waterfalls. But when you get up close they’re not so tiny anymore 🙂 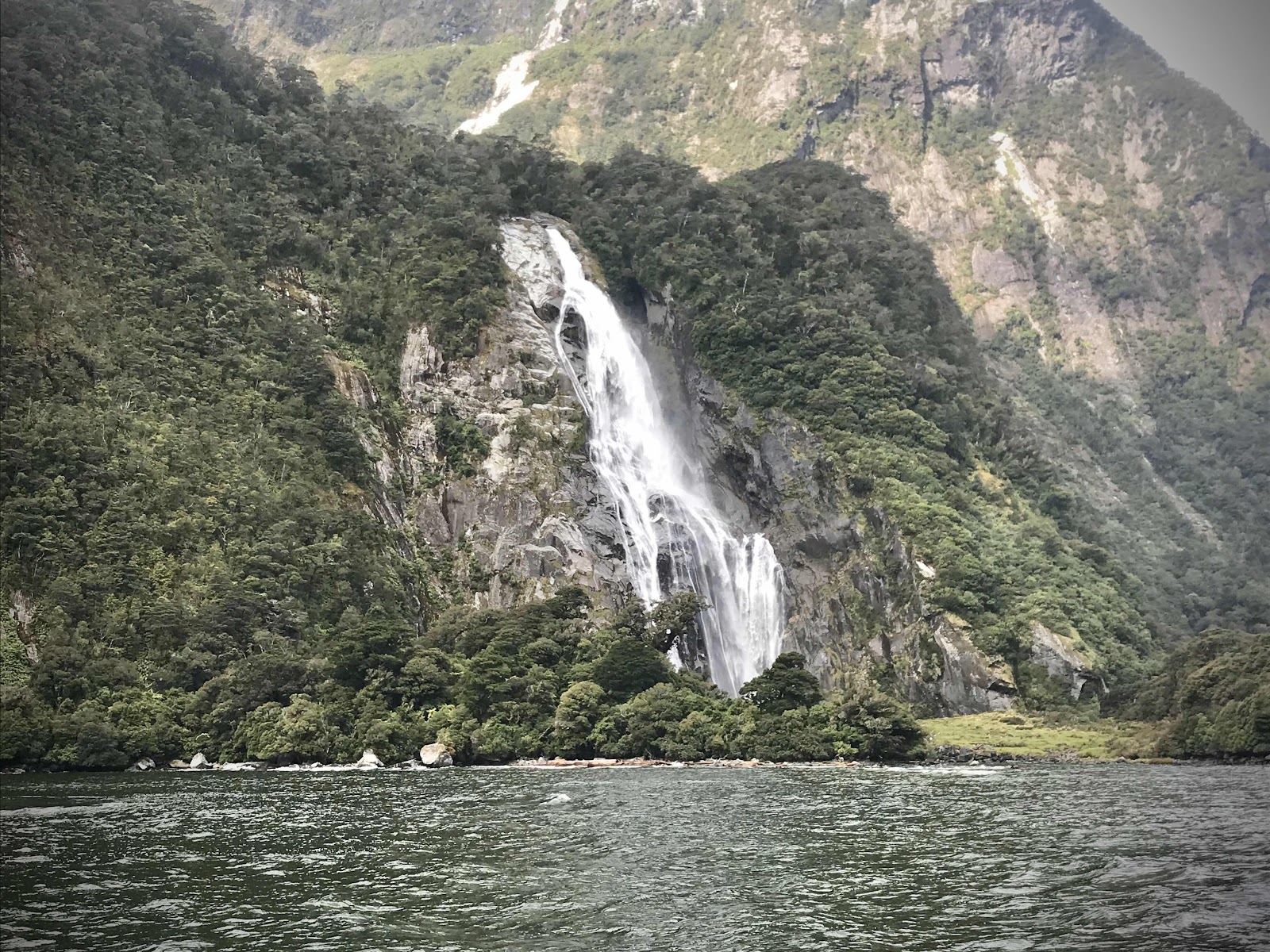 Serious amounts of water coming down… 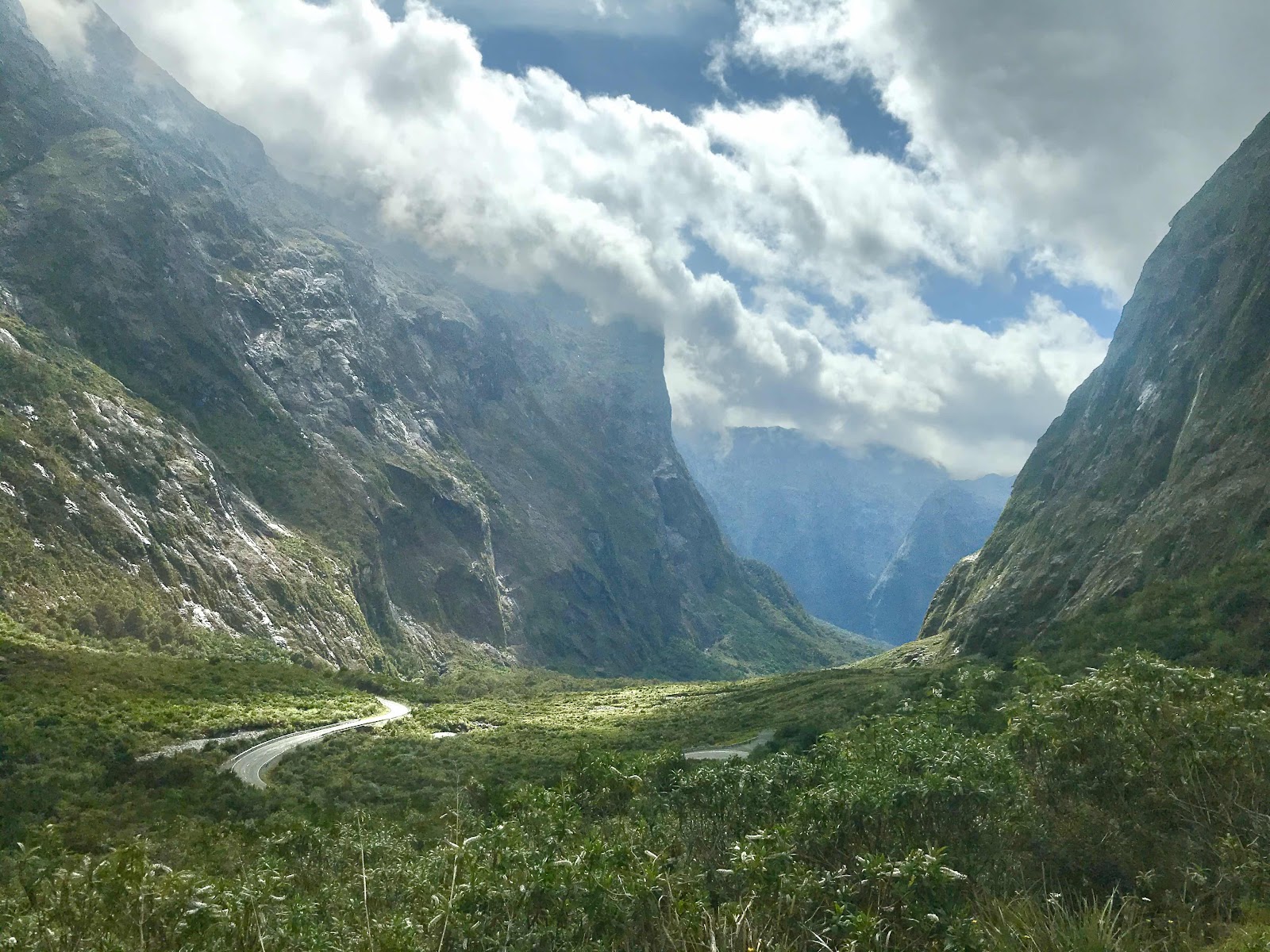 Yeah, such a shame that cycling was not meant to be… looks like paradise