I’ve experienced that it’s still high season here in New Zealand and that because of that, things tend to sell out. Like beds in hostels, but other stuff as well. So I started planning things ahead, which is absolutely not my style 🙂  I do like to know what’s waiting for me and whether I will be able to survive that, but I also like to stay flexible. Booking things ahead is detrimental to staying flexible 🙂

Anyways, I booked the boat across the lake ahead some days ago. I also booked my hostel in Te Anau ahead, and I also booked a day trip from Te Anau to Milford sounds ahead. All three are good examples of things that were rapidly selling out and for which choice was limited. The 1045 boat for example, was already fully booked, meaning that my first option to cross the lake was at 1245. I would arrive there at 130 and I figured that that would allow me with more than enough daylight to ride 50k to the remote Mavora lakes, to camp at a remote DOC campsite.

So that was supposed to be all arranged. I had a nice easy morning and stumbled out of bed around 1000, just to find out that I was still the first out of bed, in a dorm of 6. After that I had a relaxed breakfast and did some shopping on demand for my mum. At 1200 I reported to the boat company to collect my boarding pass. They looked a bit puzzled when I said that I was on the 1245 boat, because apparently there was no 1245 boat. After they checked my booking, they found out that I was booked on the boat from Walter’s peak to Queenstown, instead of the other way around. Bummer.

Lucky for me there was another boat setting out at 200 and arriving at 245. This would become a late ride. And maybe not even feasible, concerning that It would be a ride through remote high country, on gravel with some 800 meters of climbing. I still have that 2nd day on the Molesworth station in mind, where I had a hard time doing 50k and where the DOC turned me around at some point.

The girl of the boating company couldn’t tell me too much about it, because she had never been out there. That’s the downfall of a tourist industry that’s ran by backpackers themselves 🙂 I decided to take the boat and see whether there would be anyone on the other side who could tell me more on what to expect.

The boat trip was really nice, and an old steamship like this is quite fun and interesting 🙂 It was even possible to have a look in the engine room and see the steam engine working 🙂

Once on the other side of the lake I asked the first cyclists I saw what the road was like and they said it was really nice and smooth. I asked them where they had been and they said they made it to the next farm, 14k down the road. So not very helpful for me 🙂 I asked a guy from the farm, but he replied that he’d never been out there. He did know that apparently there was some big climb. I asked some more people. No one knew. Only this big climb seemed to have quite a reputation. Other than that no info.

Well, at least there was nobody who said I couldn’t go, so I decided to just give it a go. I could always pitch my tent somewhere along the road 🙂 So I got on my bike and after about a 100 meters I came across a mountainbiker, who came from where I was going. He said it had taken him most of the day. That there was a big climb. And that the gravel was oke. Shitty in some places. He said he didn’t expect that I would maken it to the top of that big hill today, with my heavy bike…

So this still gave me barely any info right. Because I don’t know what his regular day looks like. Does he start at 6 or at 12? And what is an oke road for him? And what kind of bikes does he normally ride? Loaded touring bikes or just empty mountain bikes? Most important thing for me was that he mentioned that there were plenty of places to just pitch my tent, and that he hadn’t seen any DOC people around.

So I pushed through. The road was oke. There was this shitty horrendous headwind again. But scenery was just amazing. The Queenstown lake and it’s surrounding mountains are just stunning! And at some point I turned into this empty valley with steep mountains on both sides and a very wide river in the middle. And after 30k, 2.5 hours later, I reached the fabled climb. And about 30 minutes later I made it to the top! And an hour later, around 0700, I made it to the Mavora lakes DOC campsite!

And there is nobody here! So this was the one thing that was on my bucket list for this trip. To camp on an absolutely stunning spot, by myself. And now I’m doing it. I pitched my tent on the edge of the lake, made a little fire, ate my food and watched the ducks on the lake!

I already had a similar experience on the Molesworth track, but that was just on the side of the road and didn’t feel as remote as this. Anyways, I’m really happy that I did this 🙂 Especially if you consider that I had almost pitched my tent at the tourist infested dock of the boat at Walter’s peak! And I’m happy that I did today’s ride, because I wouldn’t have wanted to miss this scenery 🙂 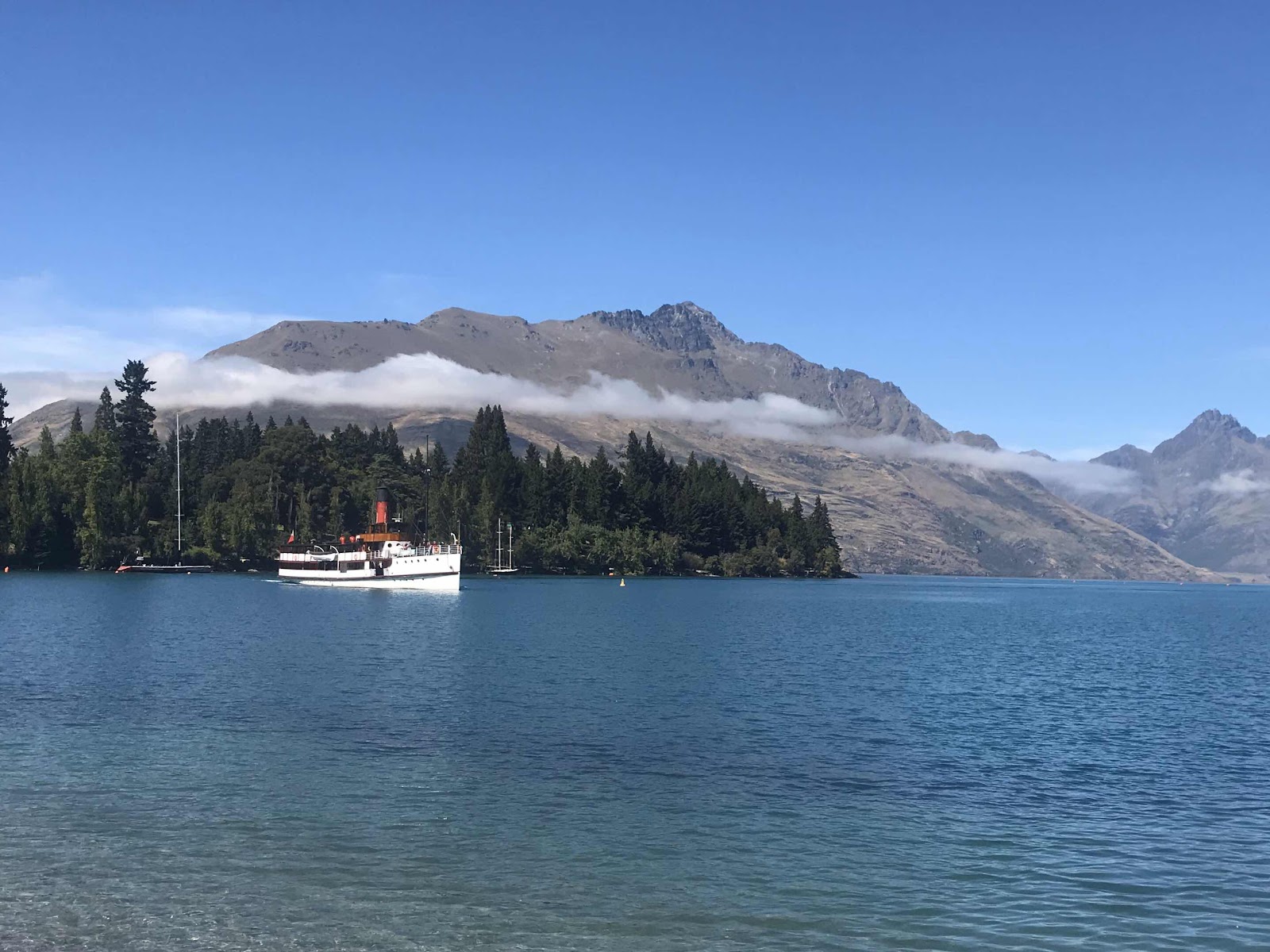 There is the 1000 boat that I should have been on… 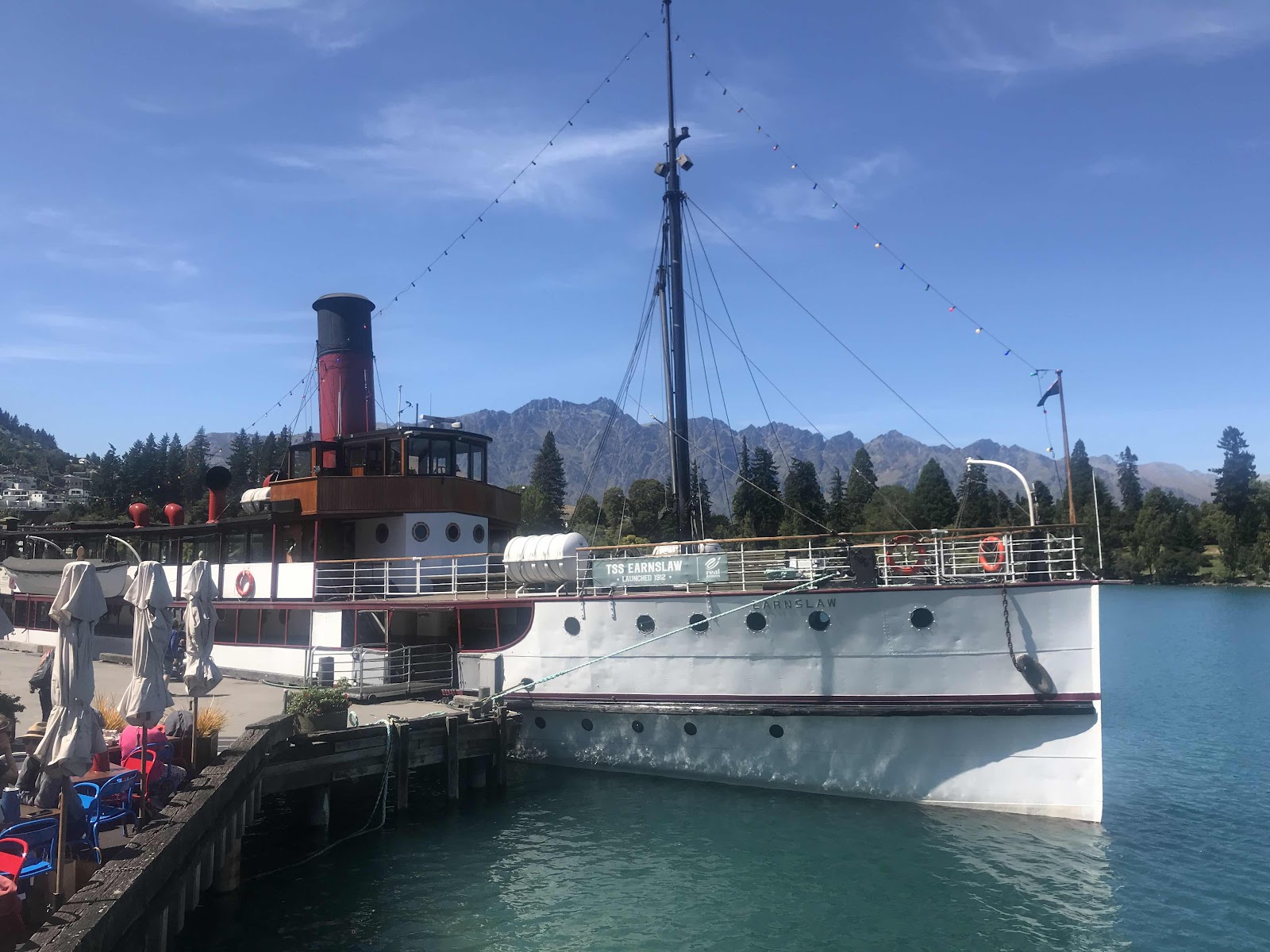 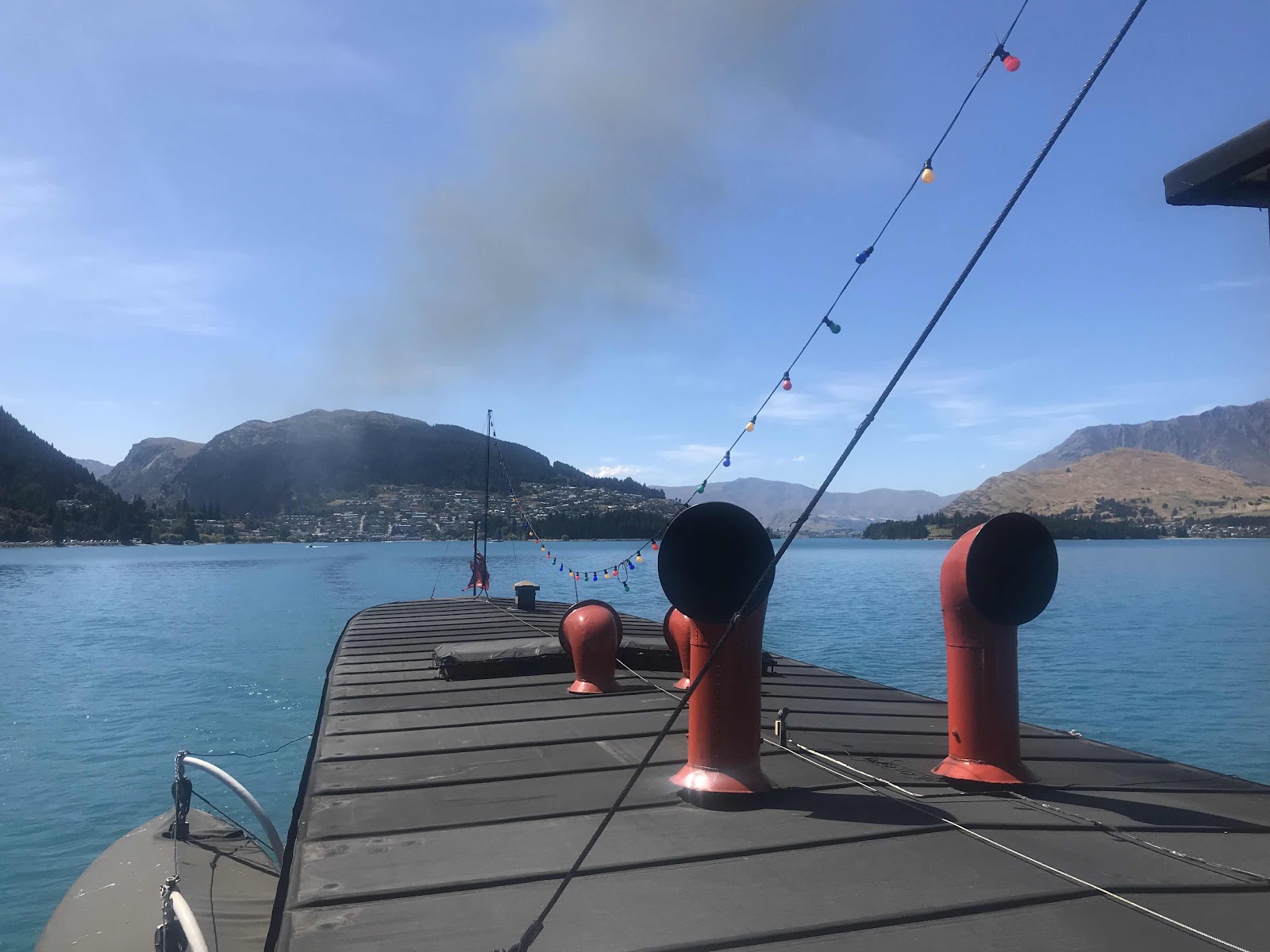 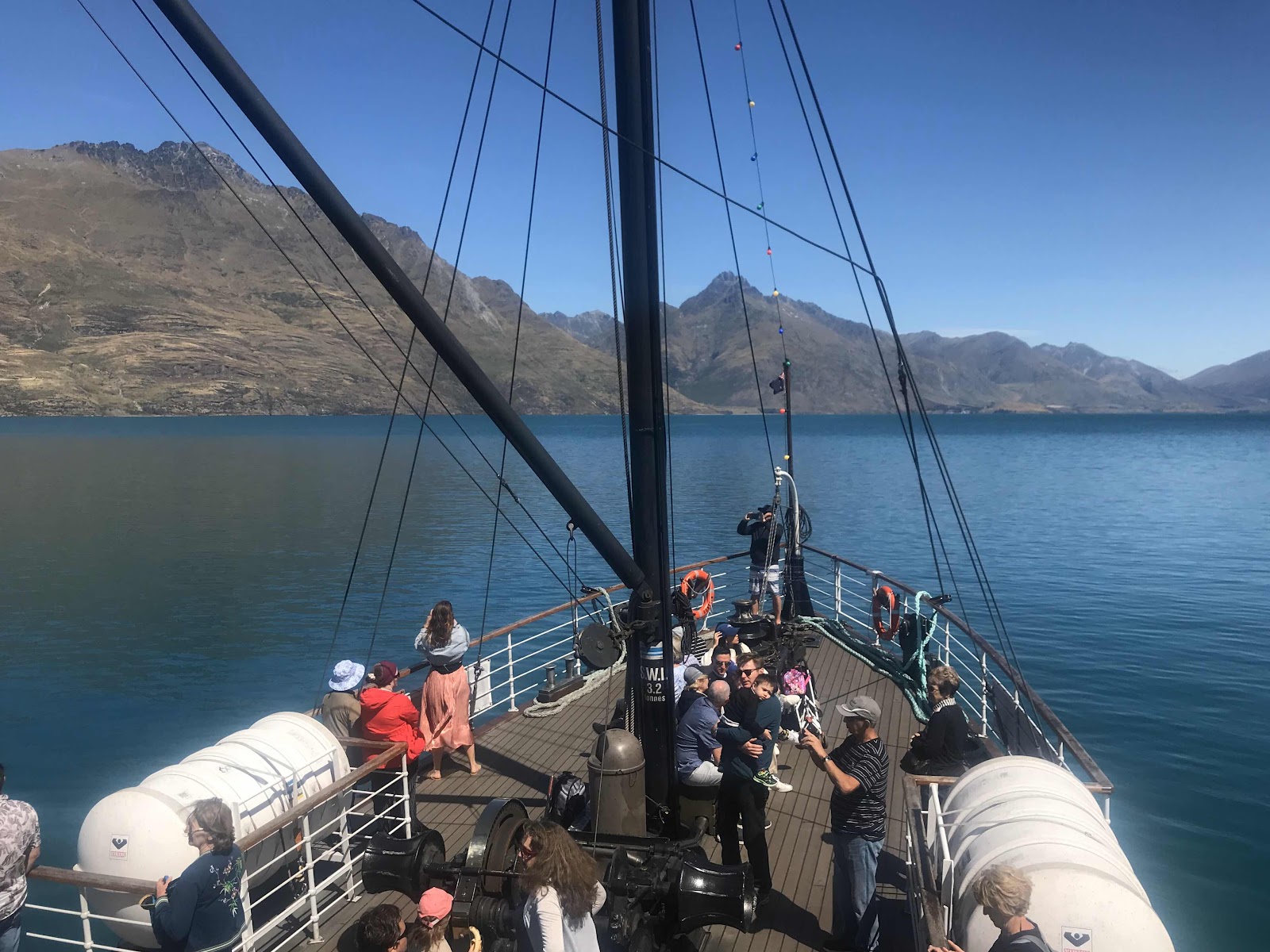 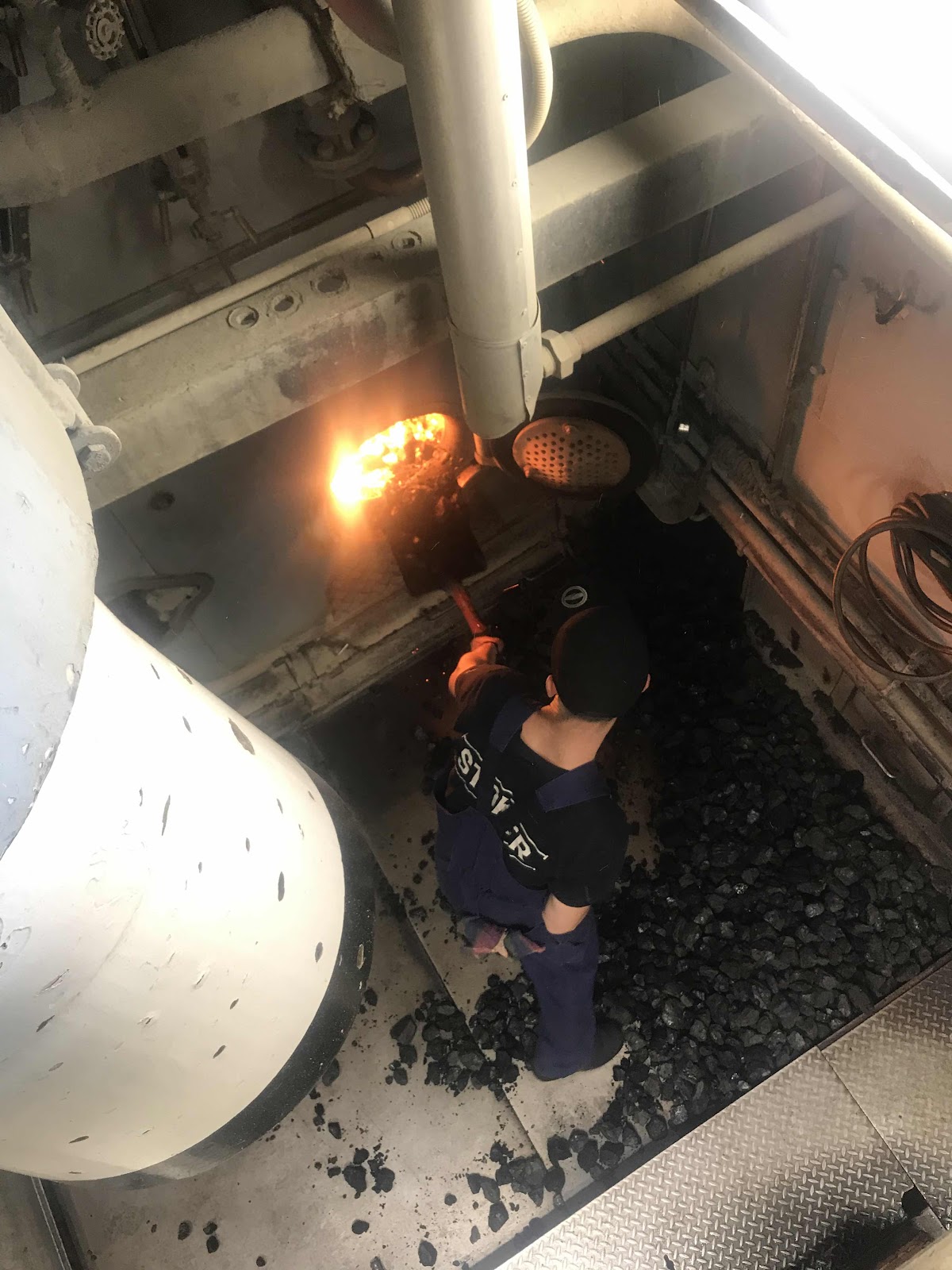 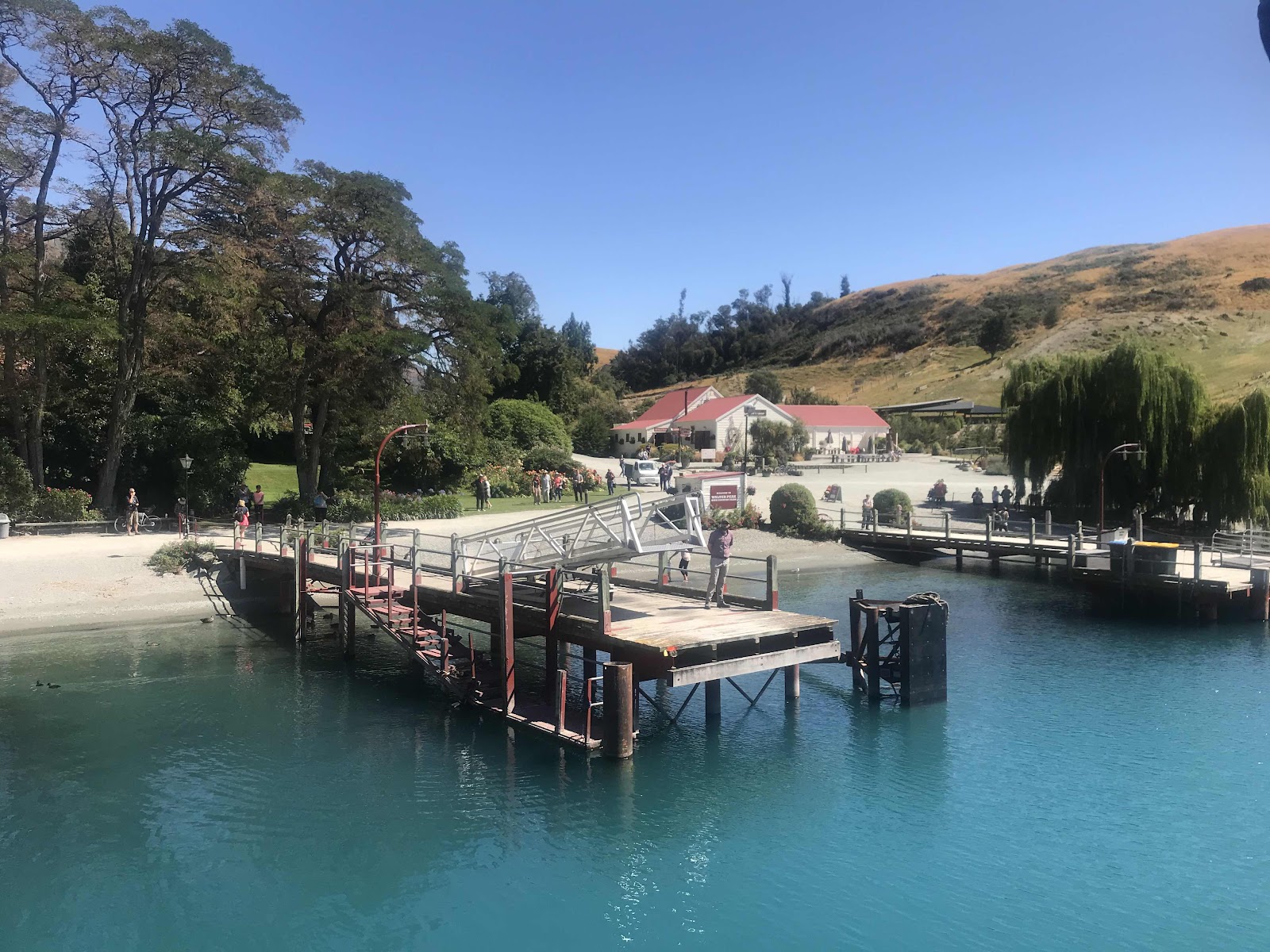 The dock on the other side of the lake… 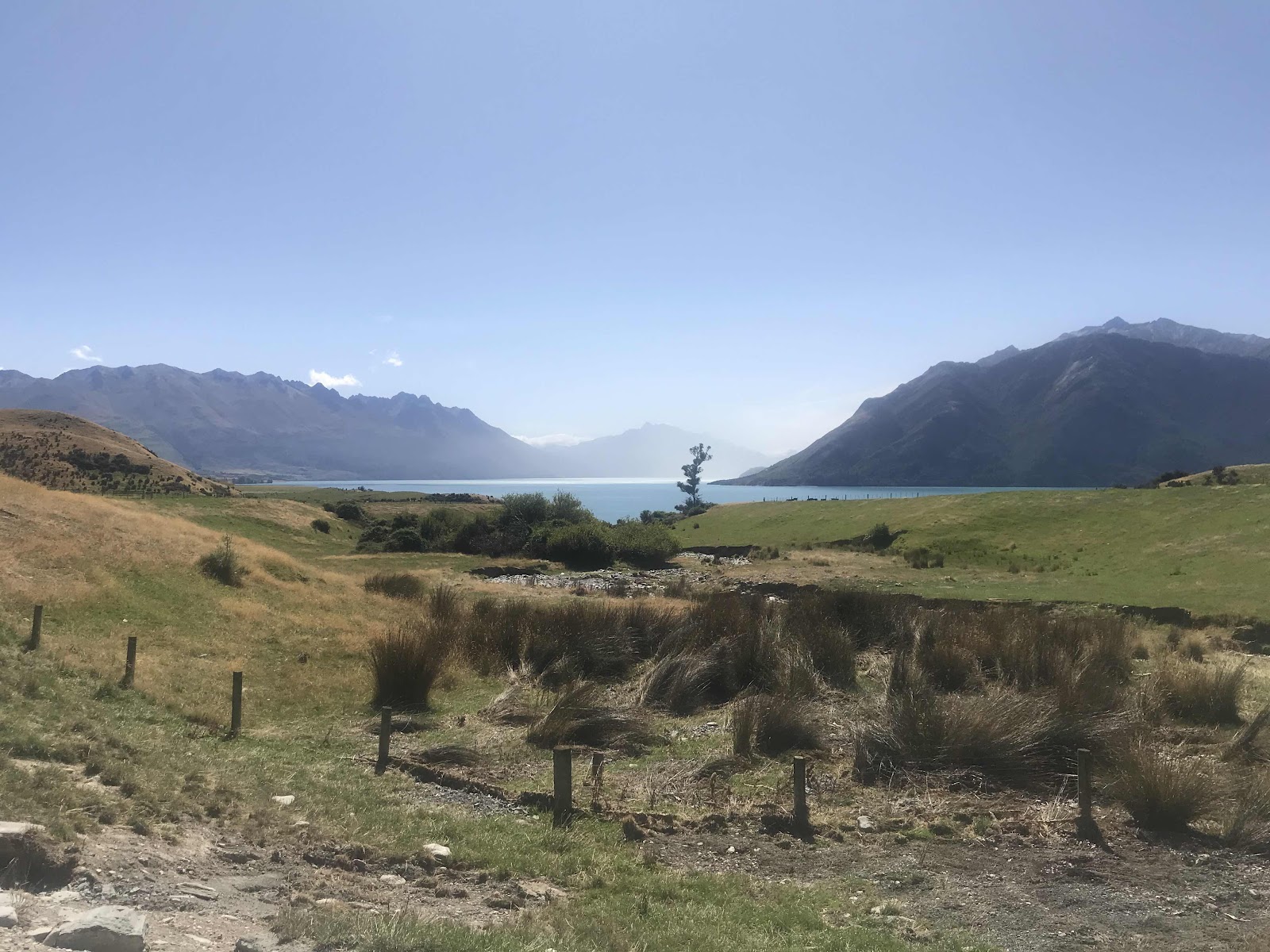 Great views over the lake 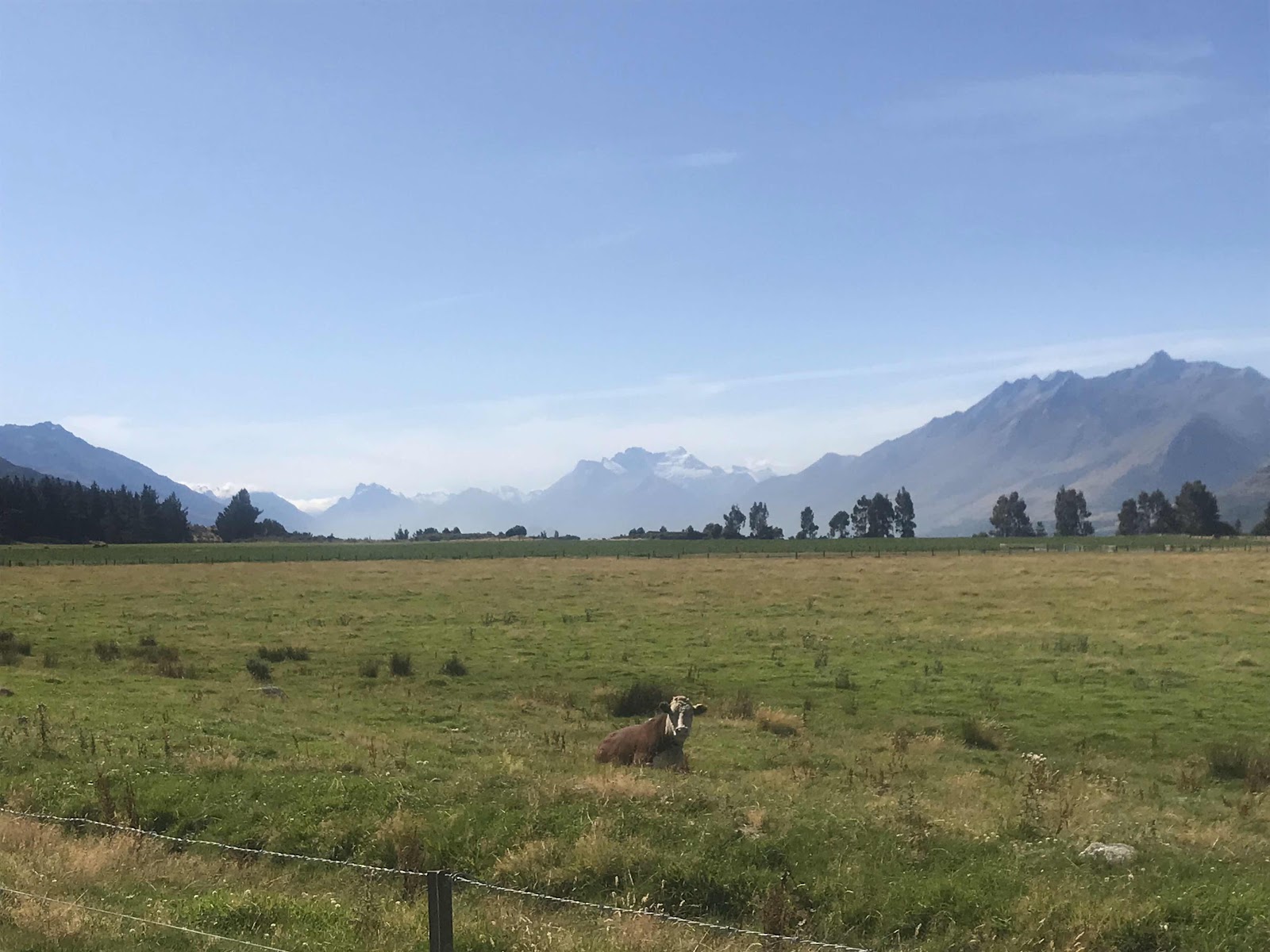 Snow topped mountains in the distance… 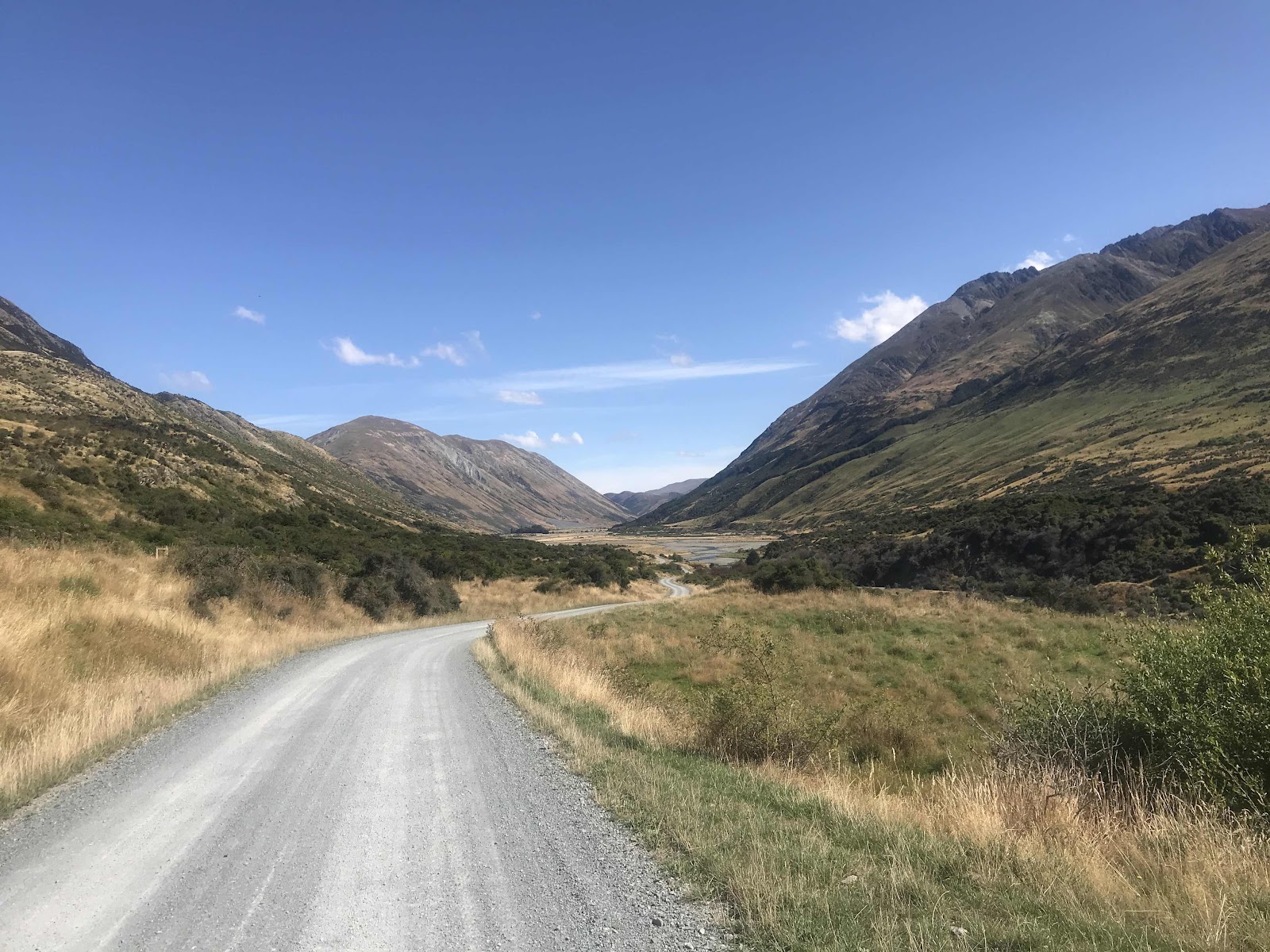 Riding through this empty valley 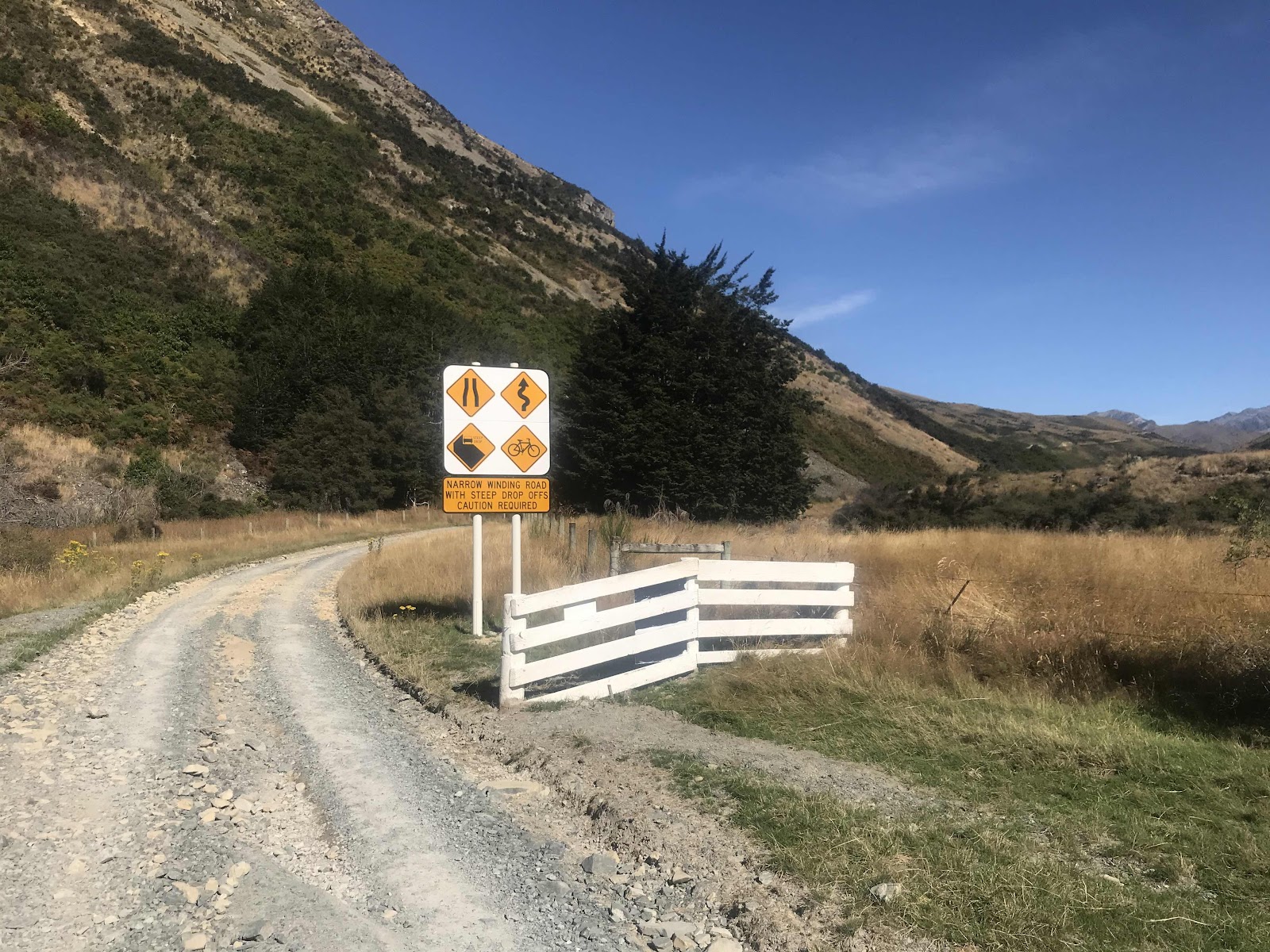 There’s just nothing there! 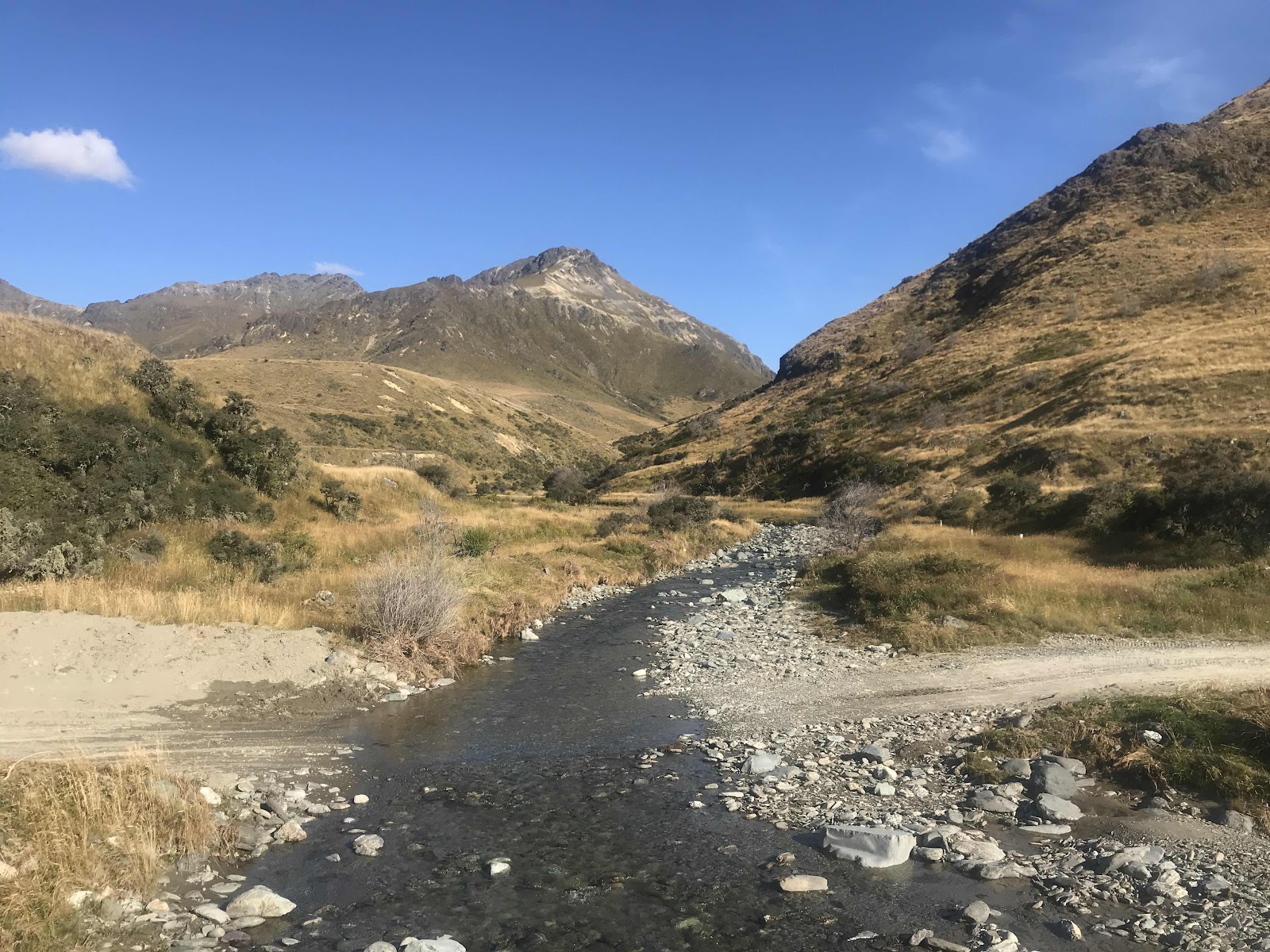 No cows, no sheep, no houses, no powerlines… 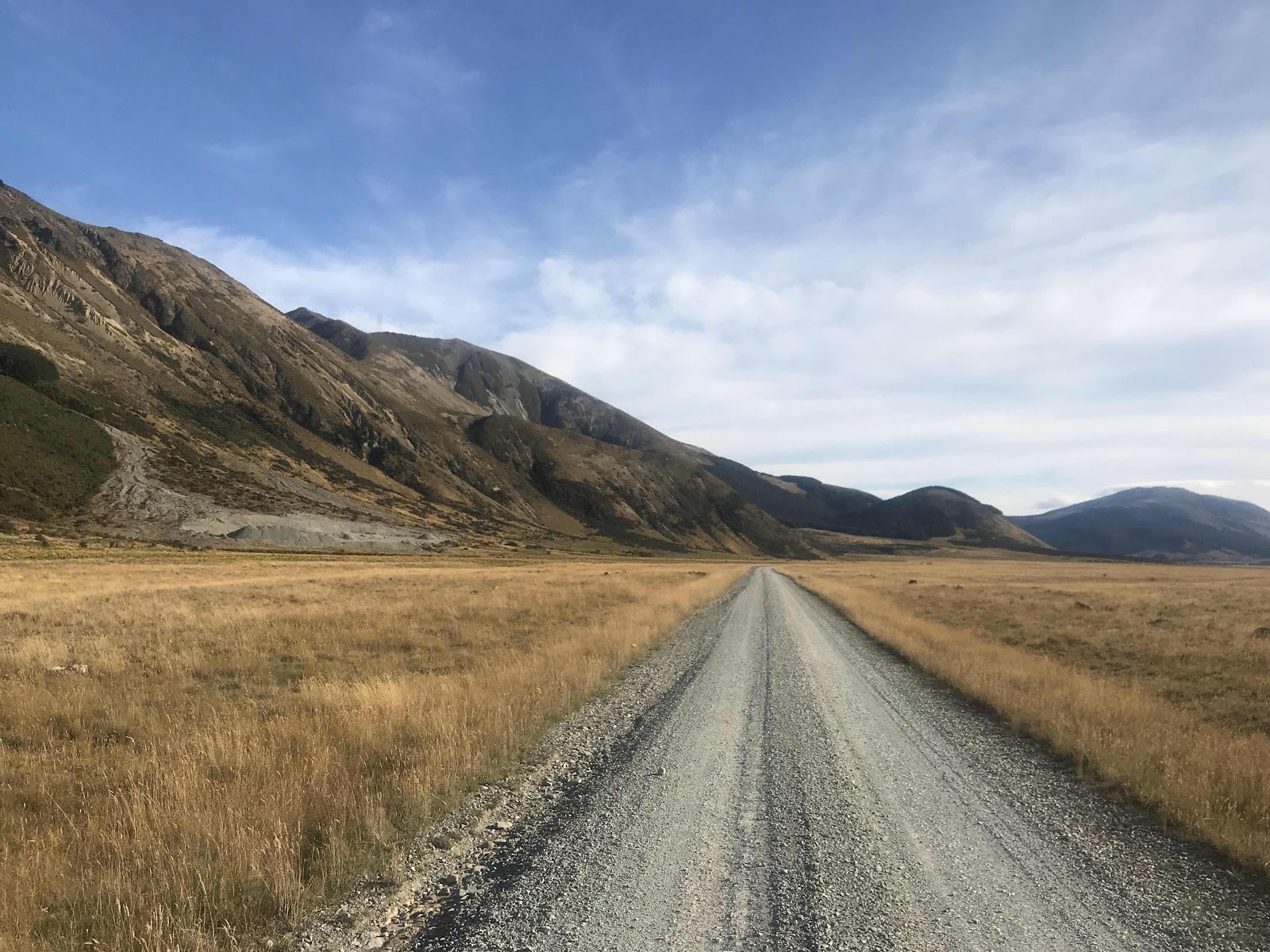 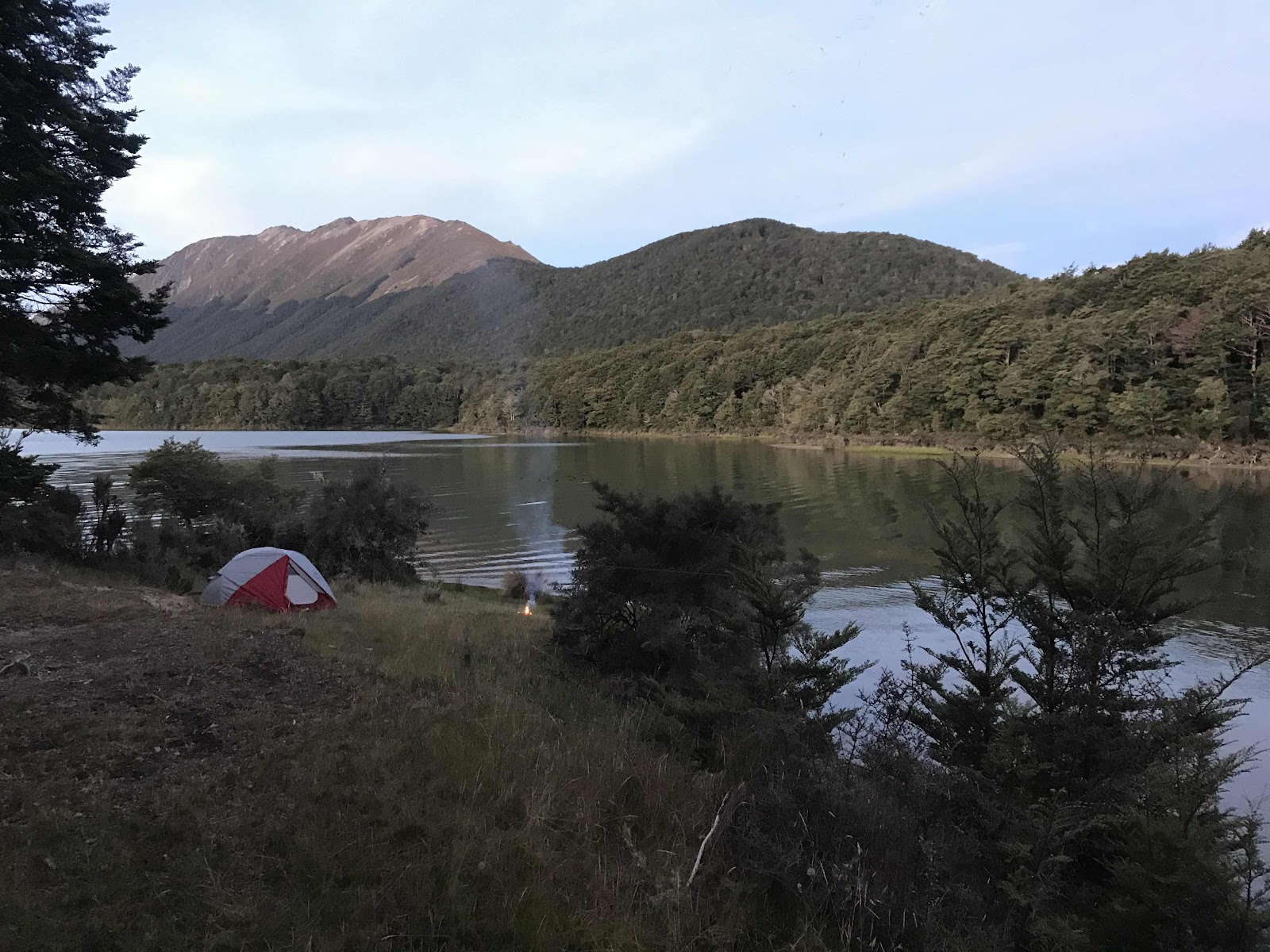 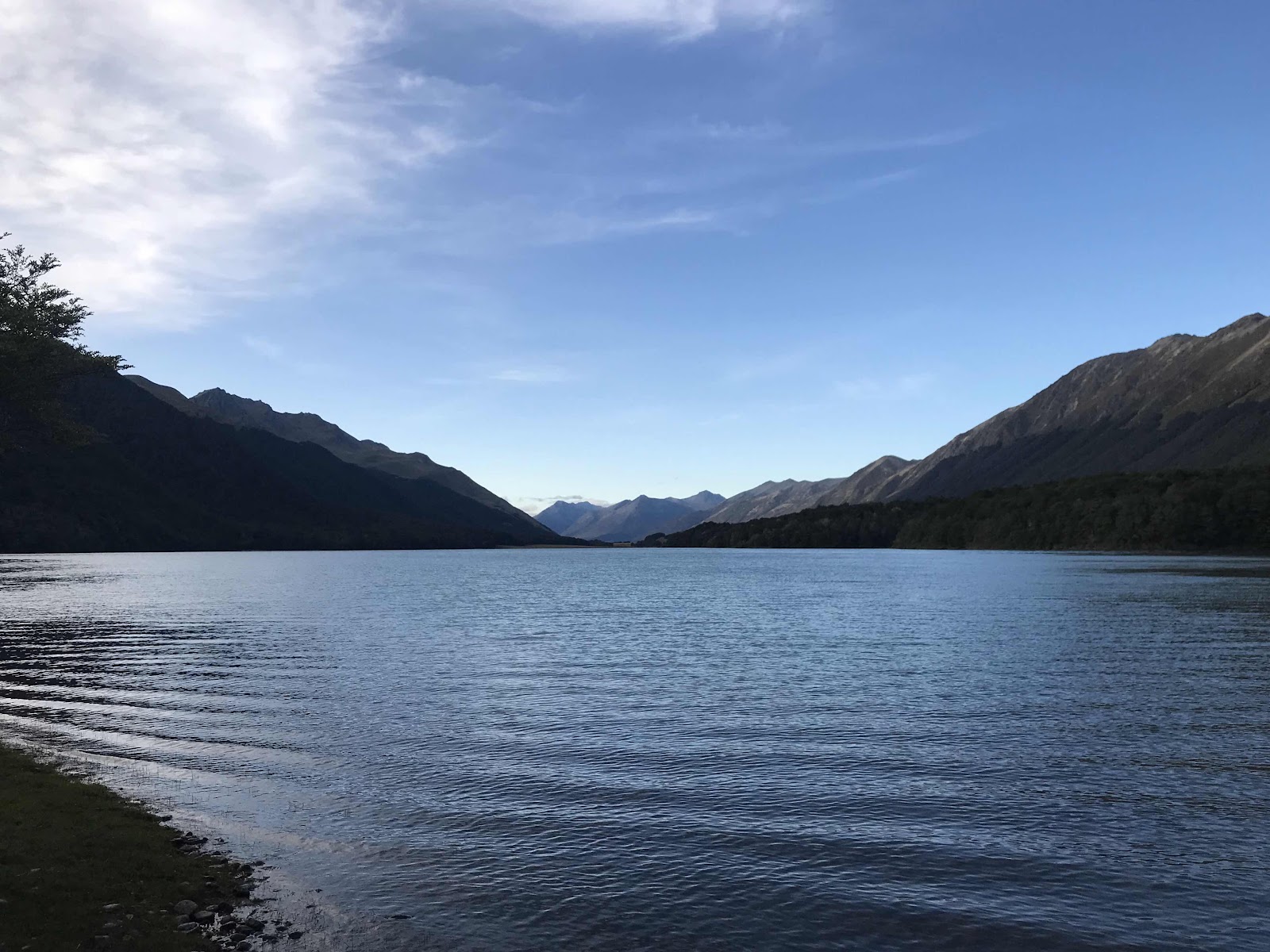 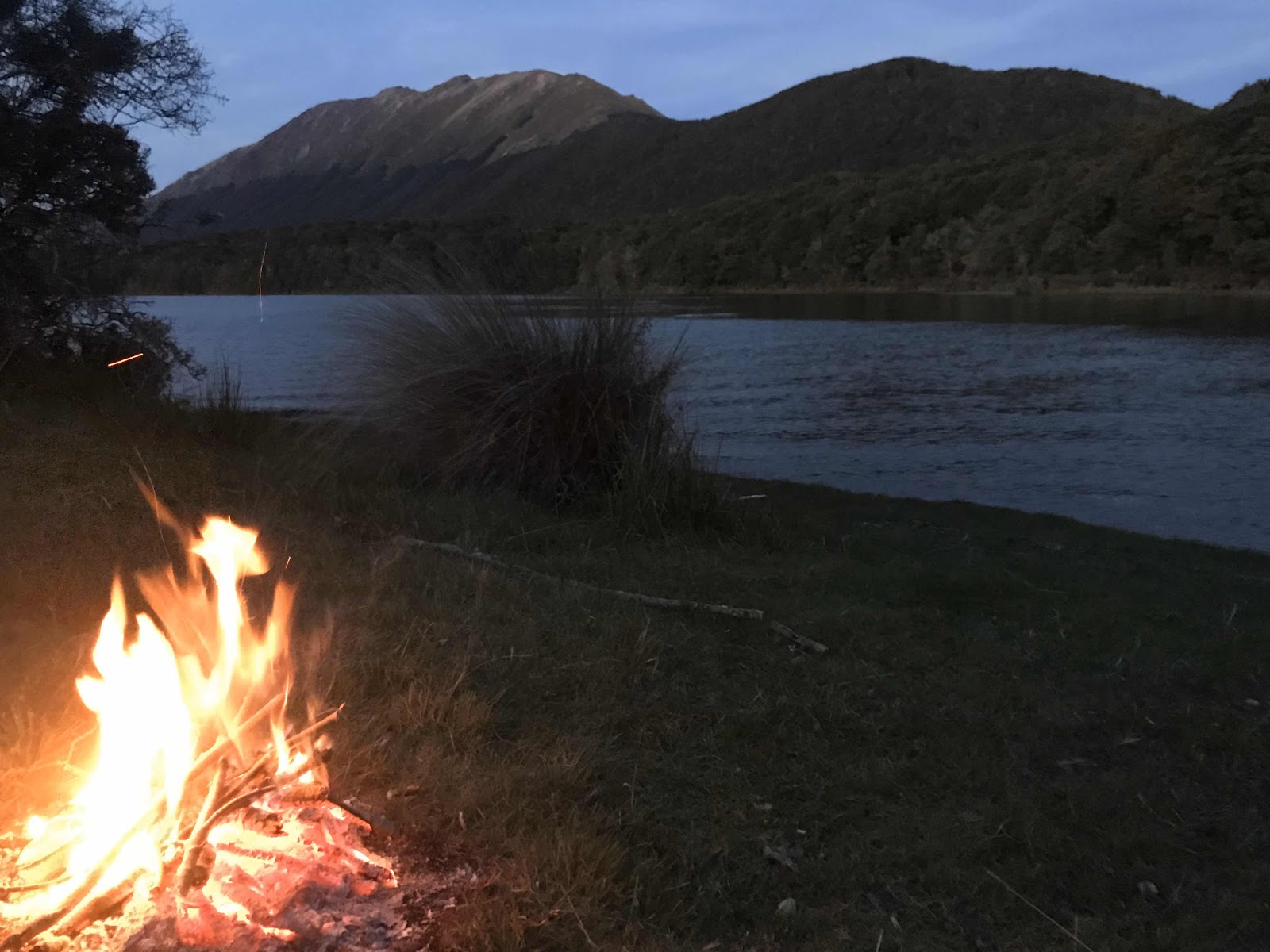