The day started out well with a 150m climb out of the river’s gorge. That certainly woke up the legs 😀 After that it all went downhill pretty fast. As in literally downhill and literally fast 🙂 Scenery along this downhill road was not great though, but at least km’s went by fast, which I can’t say of most of yesterday’s ride….

I stopped at a cafe for breakfast after 25k and had a bit of a chat with two American guys from Colorado. I figured they must feel right at home with all these mountains, but apparently the Rocky Mountains are absolutely not the same as the NZ Alps. They said I should come and visit sometime 🙂

I had another stop some 25k further down the road, where I had a chat with a NZ lady from Christchurch who is cycling from CC to lake Tekapo. It was a nice chat about the country and about the roads and about the DOC and stuff. According to her scenery will get increasing better after Geraldine, which is promising 🙂 She also pointed out two Austrian cyclist who passed by, but didn’t stop.

I finished my drink and got on my bike again and made it to Geraldine, some 30k further down the road. On my way there I overtook the two Austrian cyclist, but as these roads do not allow for side by side cycling, we didn’t chatted or anything. Once I made it to Geraldine I had lunch and read a bit. I had to decide whether I would continue or stay here for the night. It was only 2pm and I had done only 80k. Next campsite was 47k down the road and included some 800 meters of climbing.

I decided to continue, figuring that if I would not make it to Fairlie, that I would camp somewhere along the road. It turned out to be quite a relaxed bit of riding 🙂 Uphills were all quite gradual and I had some nice winds on my tails. And with the hills the scenery improved. Towards the end it got a bit hot though, even though during the rest of the day it had been quite cool…

I reached the Fairlie holiday park and reported to the camp manager. I asked him if I could sleep there and I got a camp spot, a towel and a gig of free wifi 🙂 for 18nzd. I’ve never been to a campsite where I received a towel and free wifi 😀

After setting up my tent I walked into town and had a very nice pizza 🙂 So all in all it’s been a pretty good day! 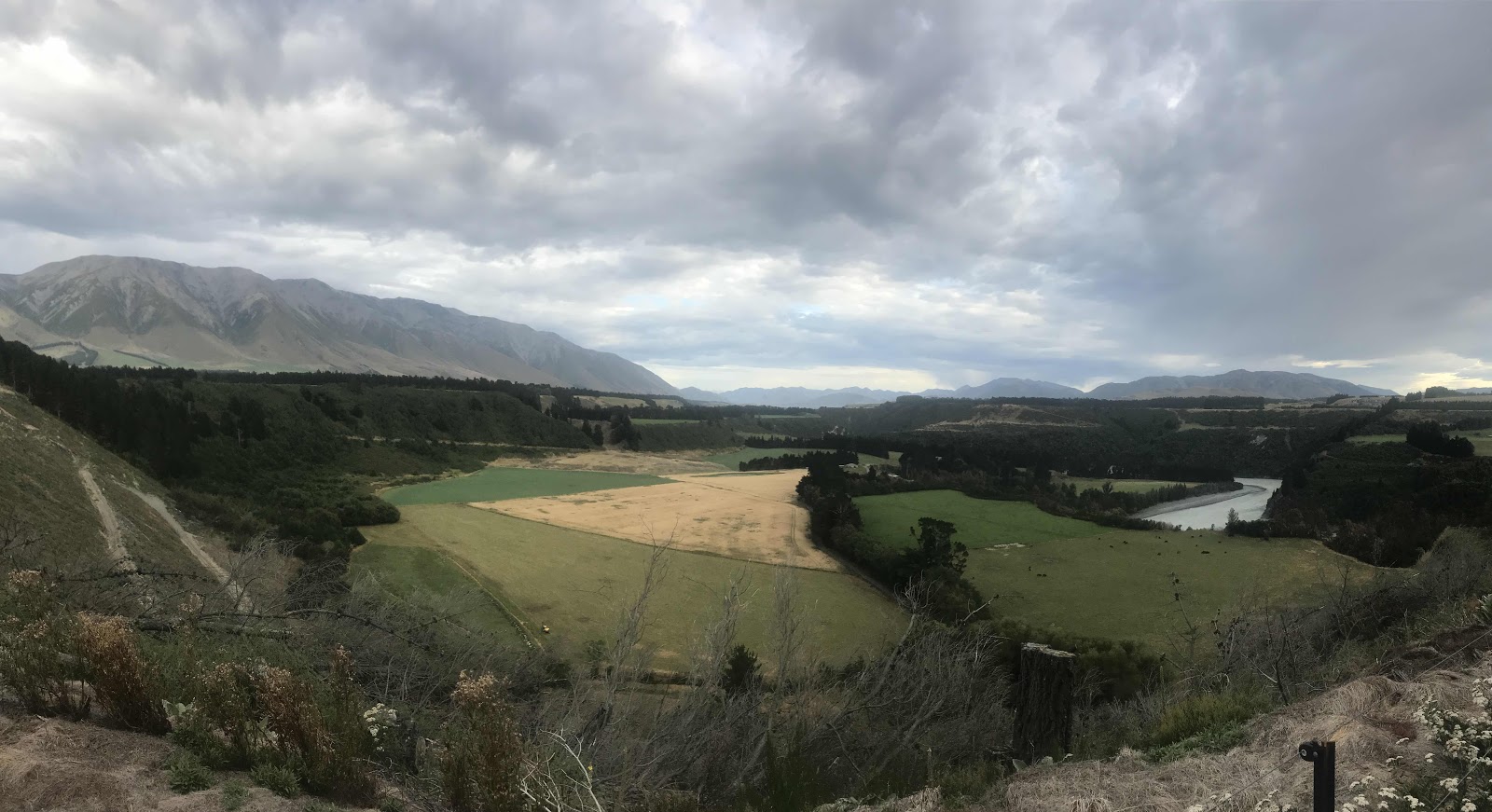 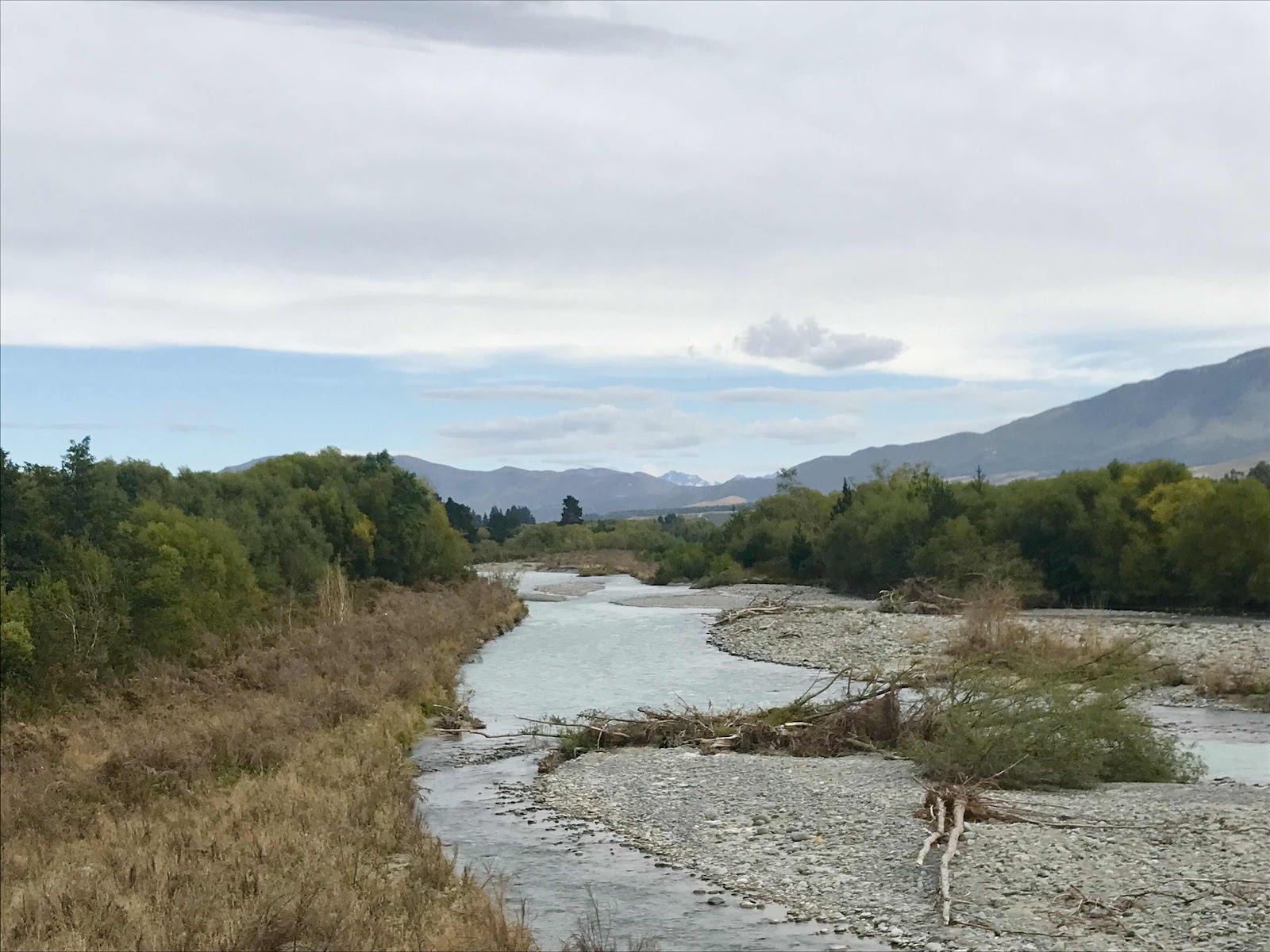 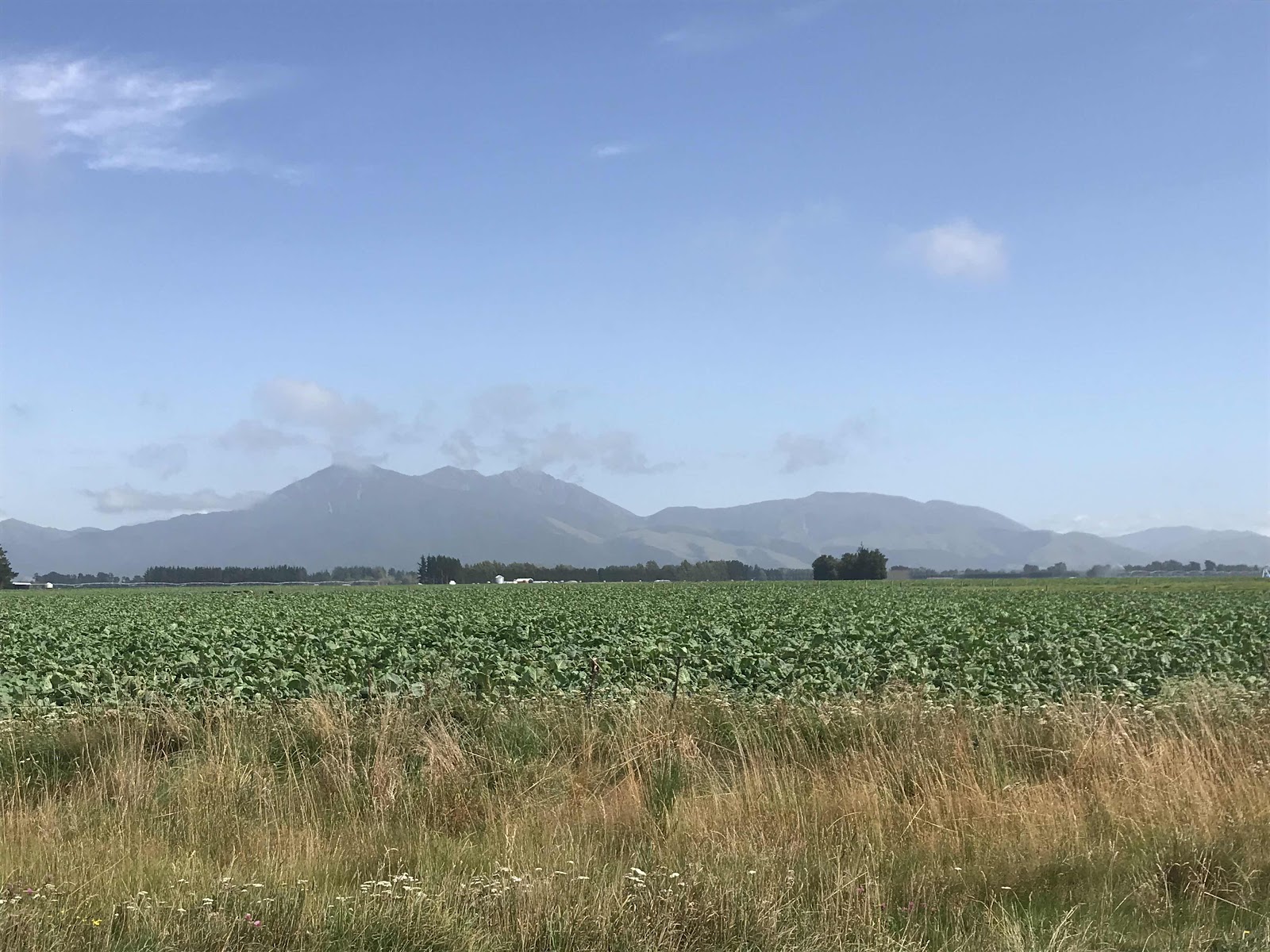 Farmland! With mountains on the backdrop though… 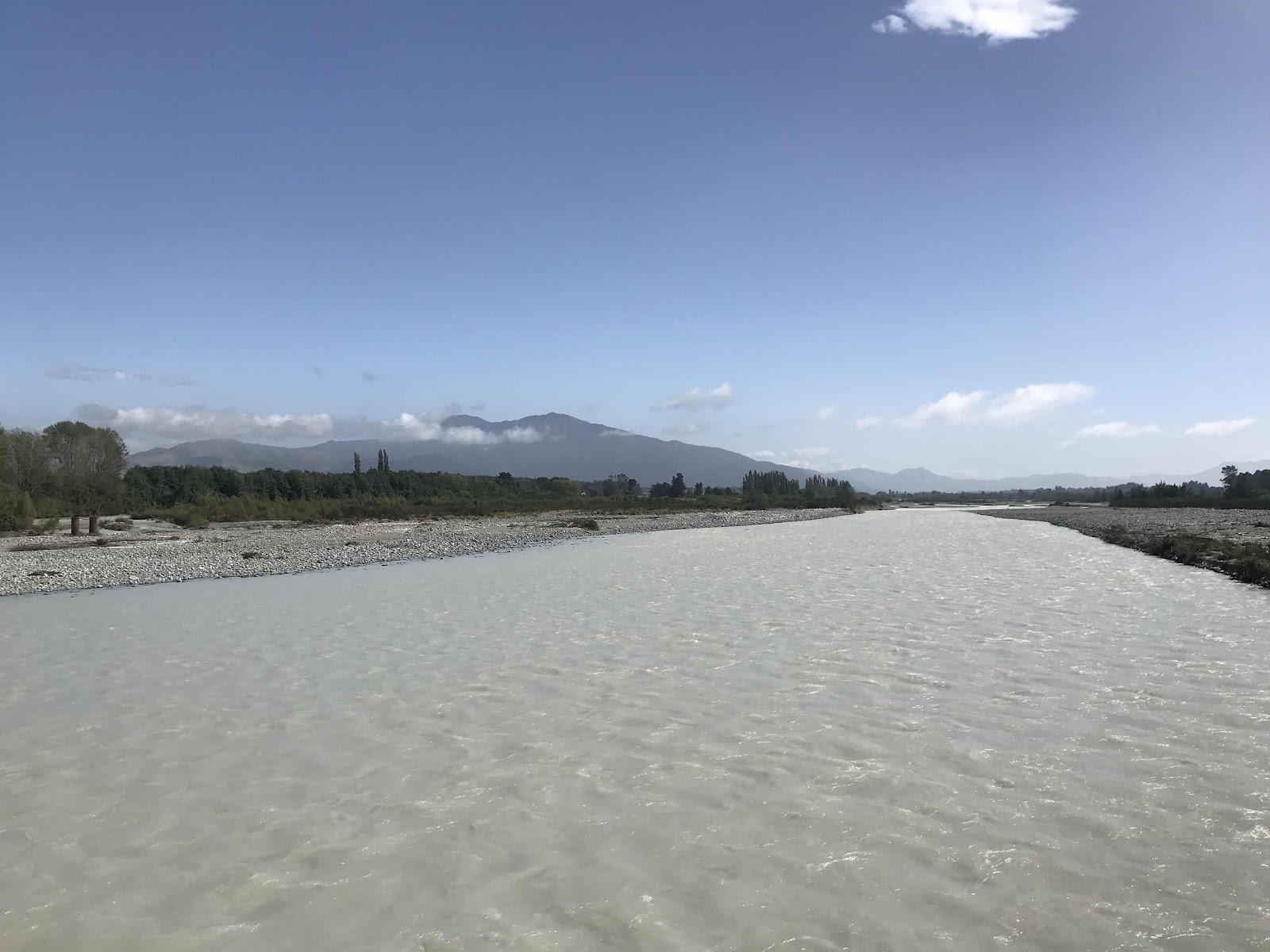 And another river! Water still mirky though… 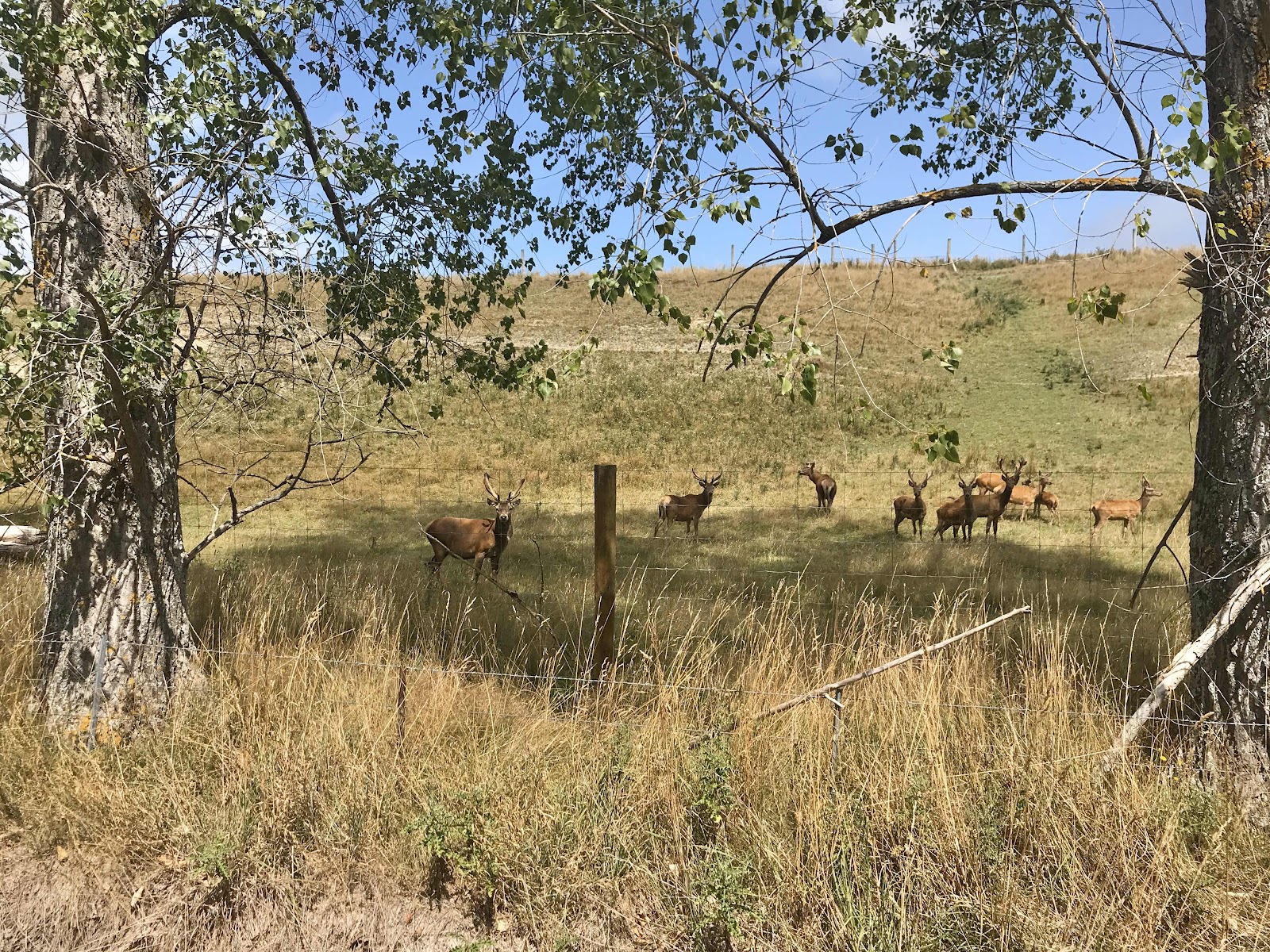 Deer! It was a deer farm though… no native deer in NZ 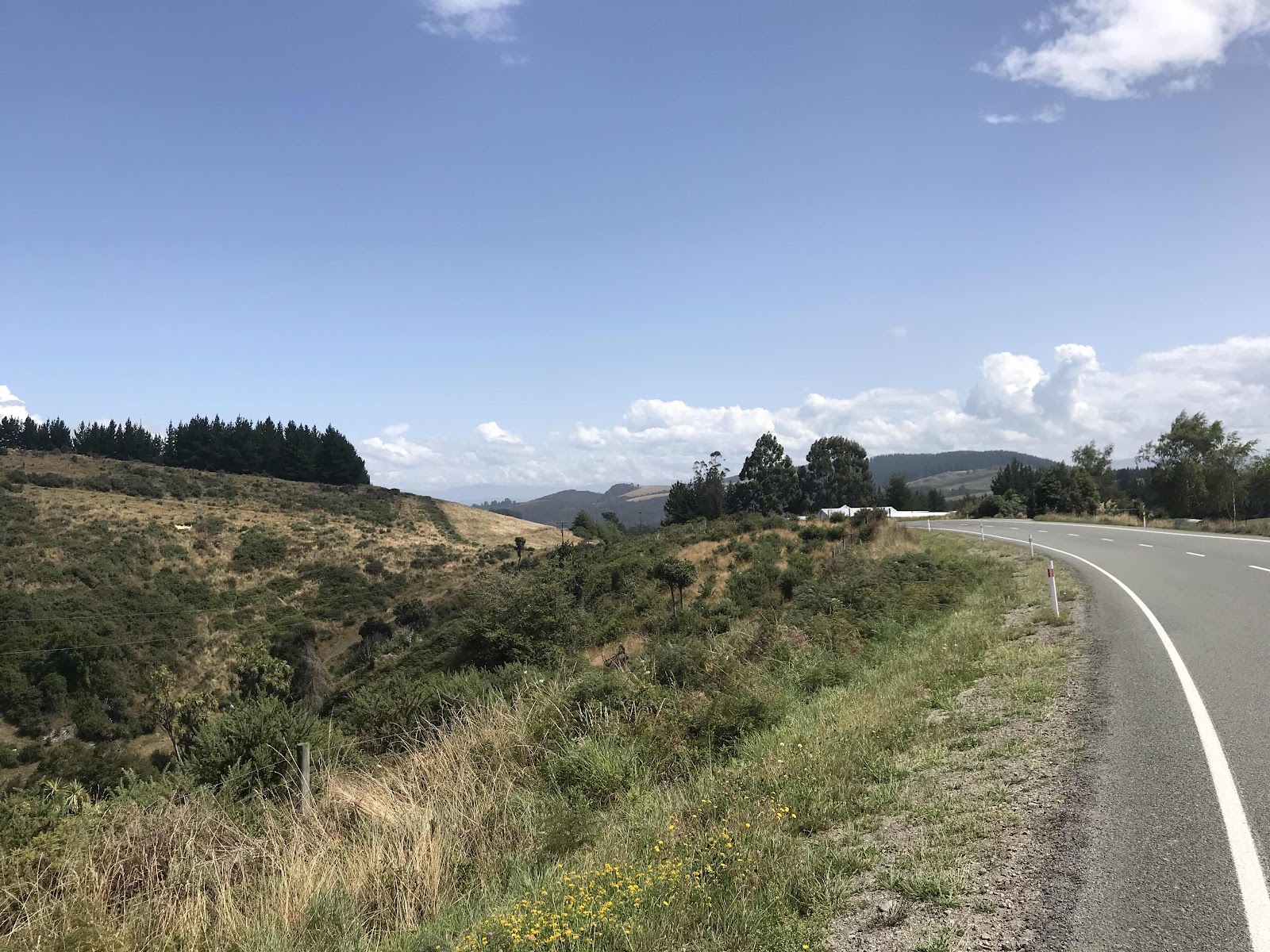 After Lunch there were hills again 🙂 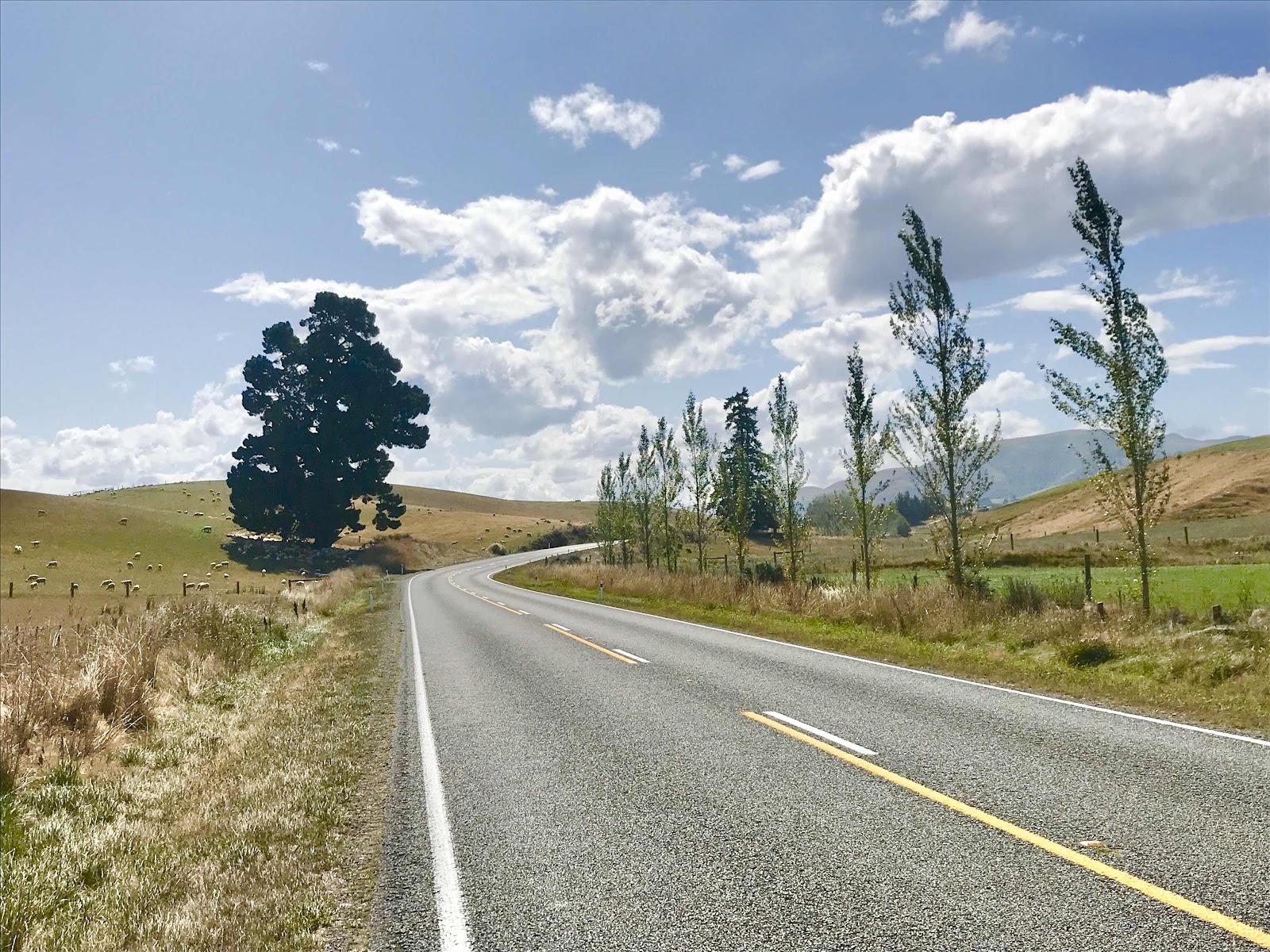 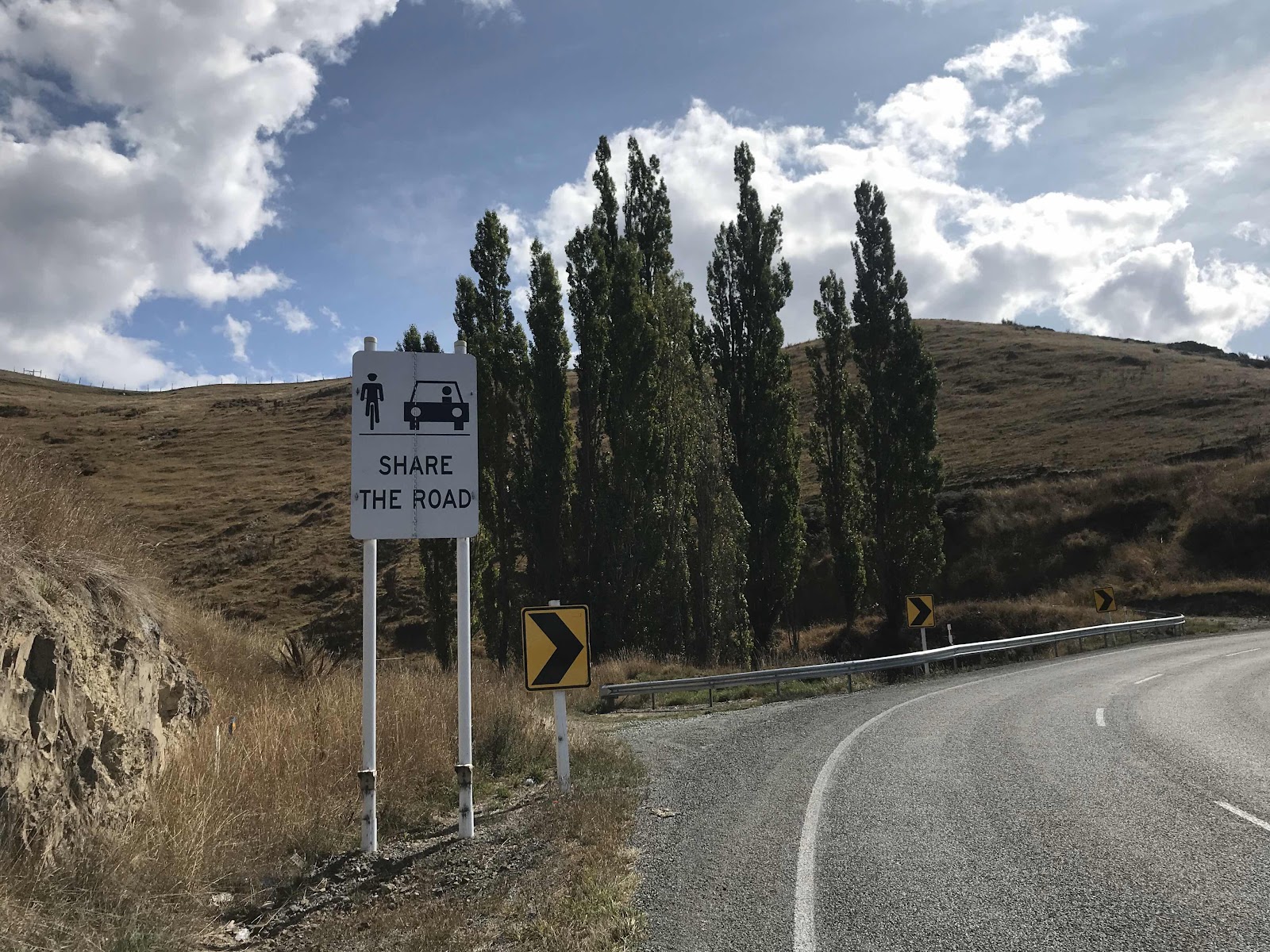 Yeah! Share please… and be patient. No need to overtake me with 20cm between us while another car from the opposite direction is passing as well. Your destination is not running away! And you’re driving a big campervan! Not your small Toyota Aygo or Volkswagen up! So please start behaving like your car’s got a big ass! 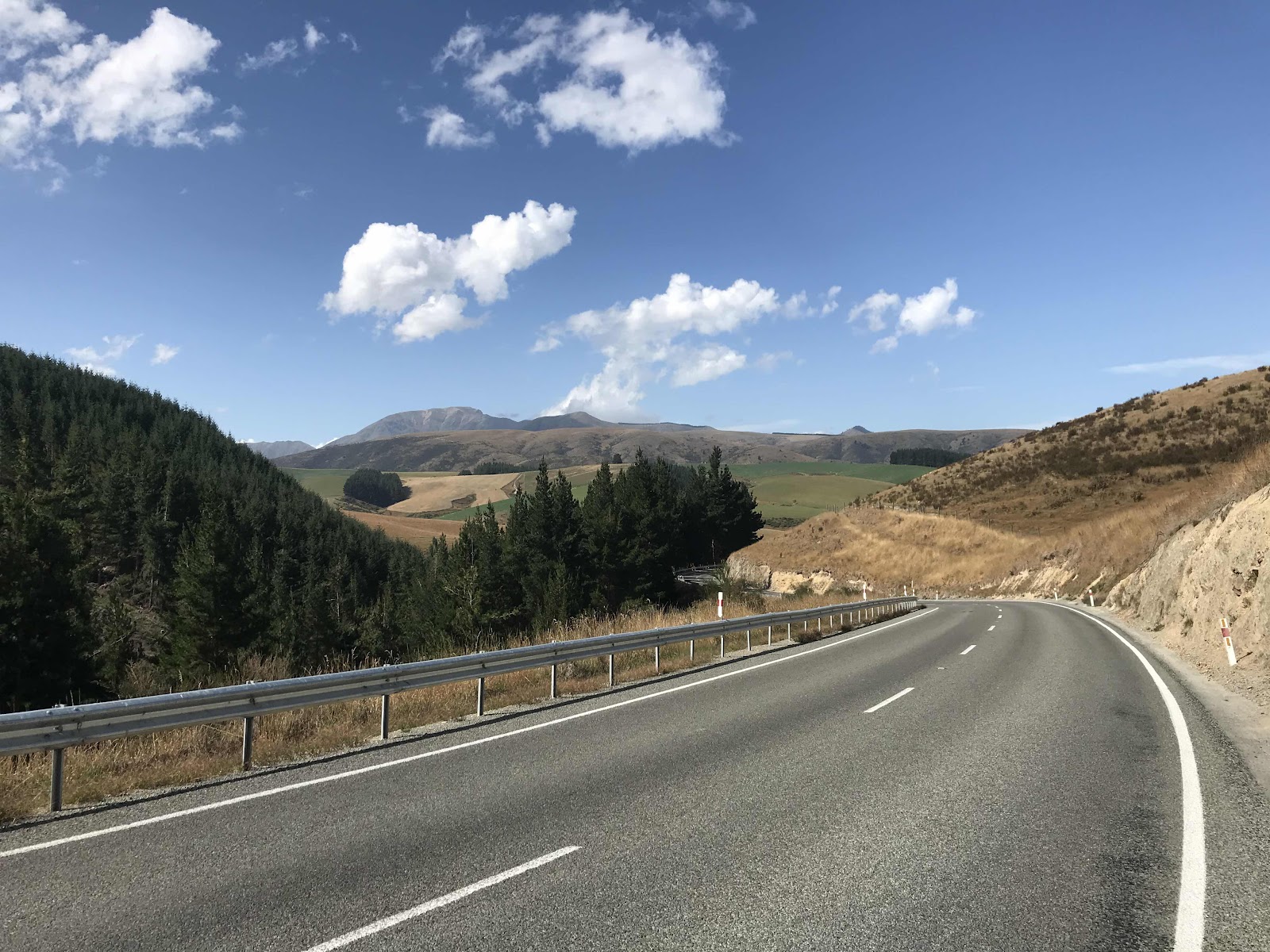 I have a love / hate relationship with hills… 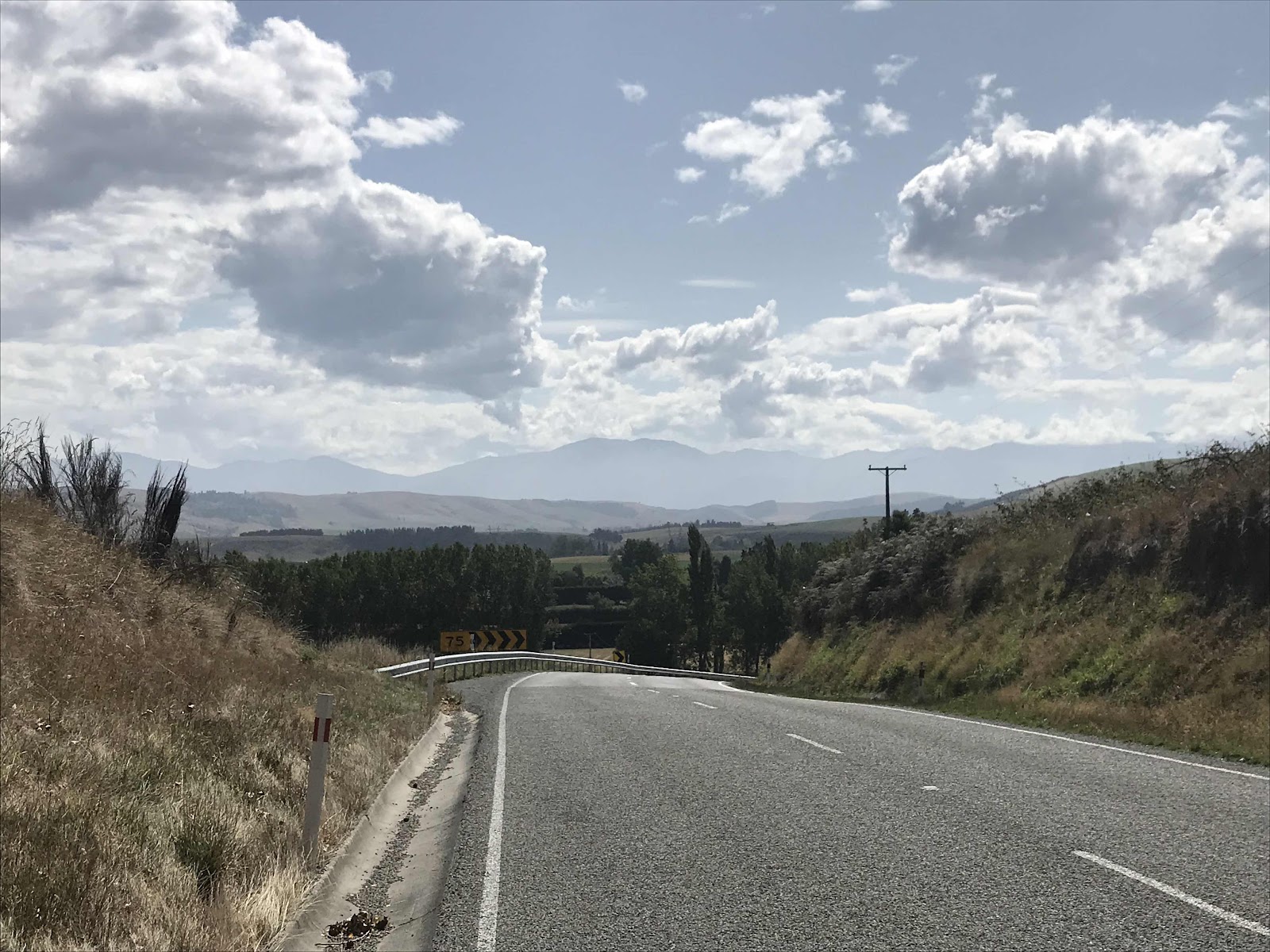 Loving the downhills and the views….