On paper another suposedly easy day. 93k and relatively flat. However we were warned at rider meeting that the first 29k would be horible dirt road again, meaning sand and corrugation. So I left early, getting it over and done with.

It actually turned out that the first 29k were quite fun. Between the main road and the railway there was some kind of service road, which was also dirt, but which was quite fun to ride. And more important: not too slow 🙂
After this first 29k we got back to the main road, which was properly graded and easy to ride, but not very exciting. Luckily we had another proper coke stop at 47k, where they had Namibia’s best apfel strudel, although it was not really apfel strudel 🙂 It was a very nice apple crumble though.
After the coke stop it was 20k to lunch, and after lunch 27k to our camp at Cañon Roadhouse, which is an old roadside service/filling station turned hotel/campsite. Once there I put up my tent, took a dip in the pool, had some food and then took a car together with Ash, Lisa and Fred to see the Fish River Canyon; Africa’s largest  canyon and suposedly the second largest in the world after the Grand Canyon in the US. It’s some 500 meters deep, 27 kilometers wide and 160 kilometers long. And just very impressive! We went to a number of viewpoints ans while having a drink watched the sun set.
After the sunset we drove back in our convertible landcruiser, which was an amazing experience as well. Riding through the pitch black desert over the horible corrugated roads, while watching the insanely bright starry and moonless night sky, while riding past zebras, ostriches and springbok.
Just another day in Africa… 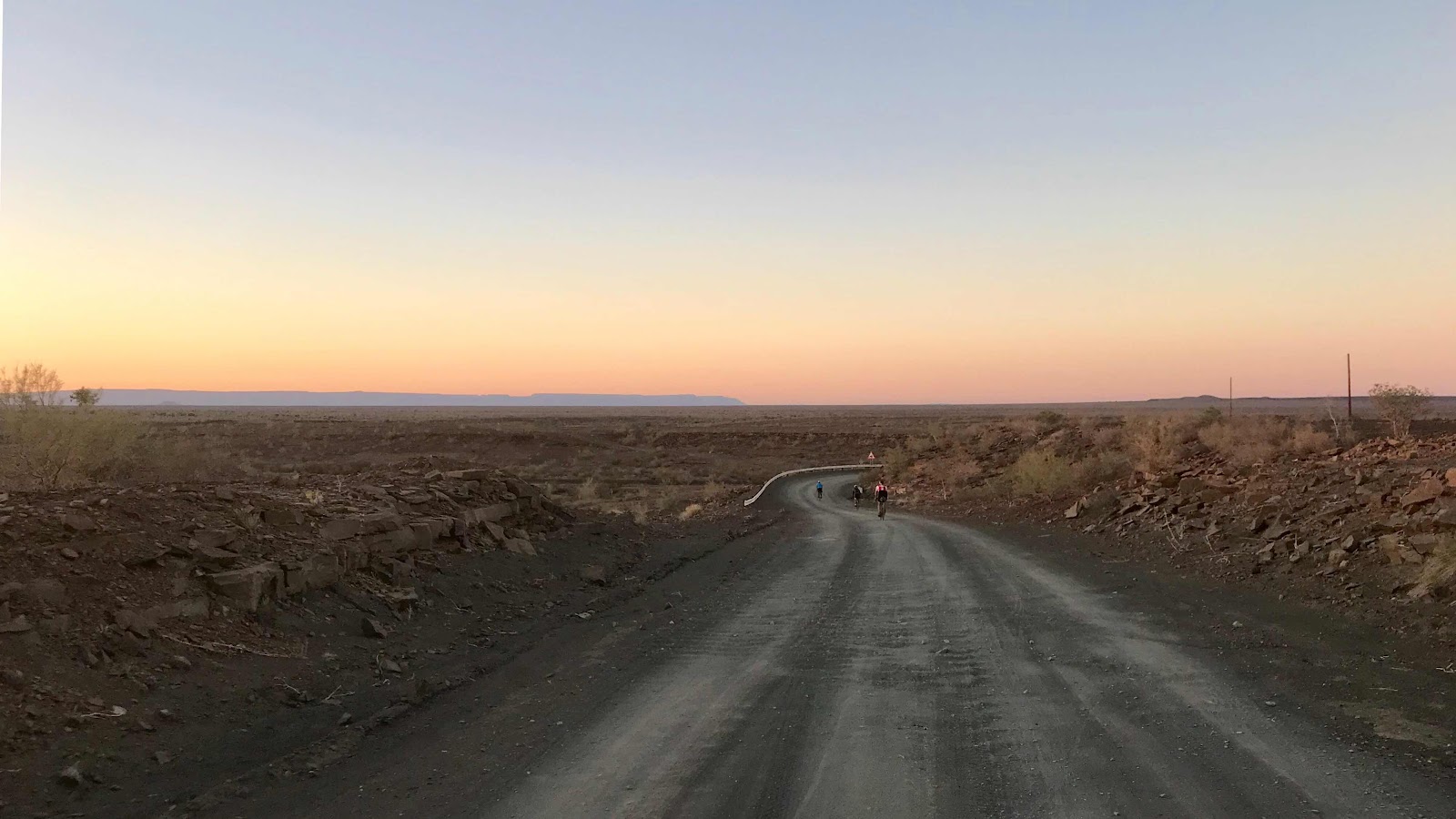 A brand new day on the same horible Namibian roads 🙂 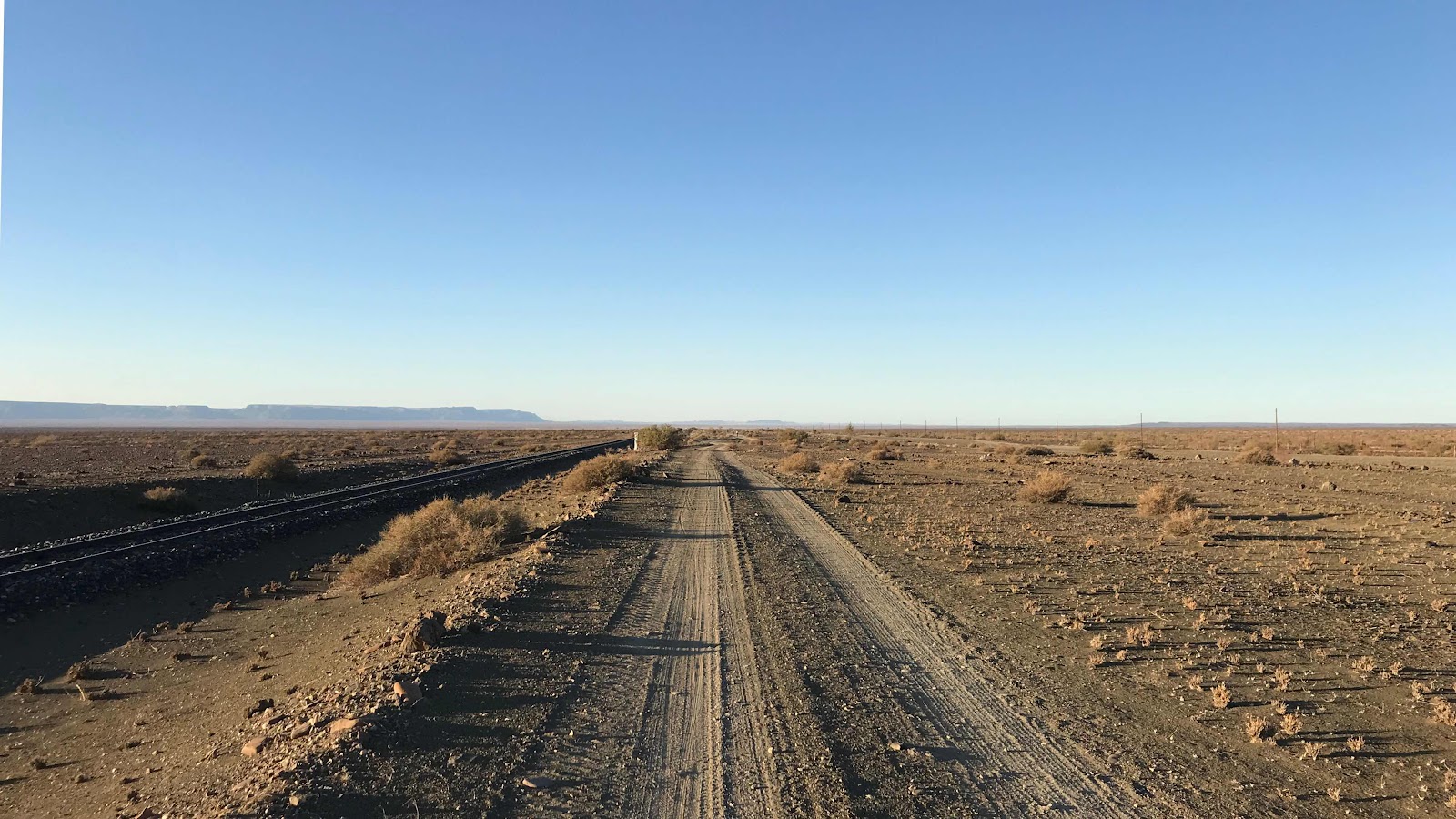 Riding the service road next to the railway was fun though! 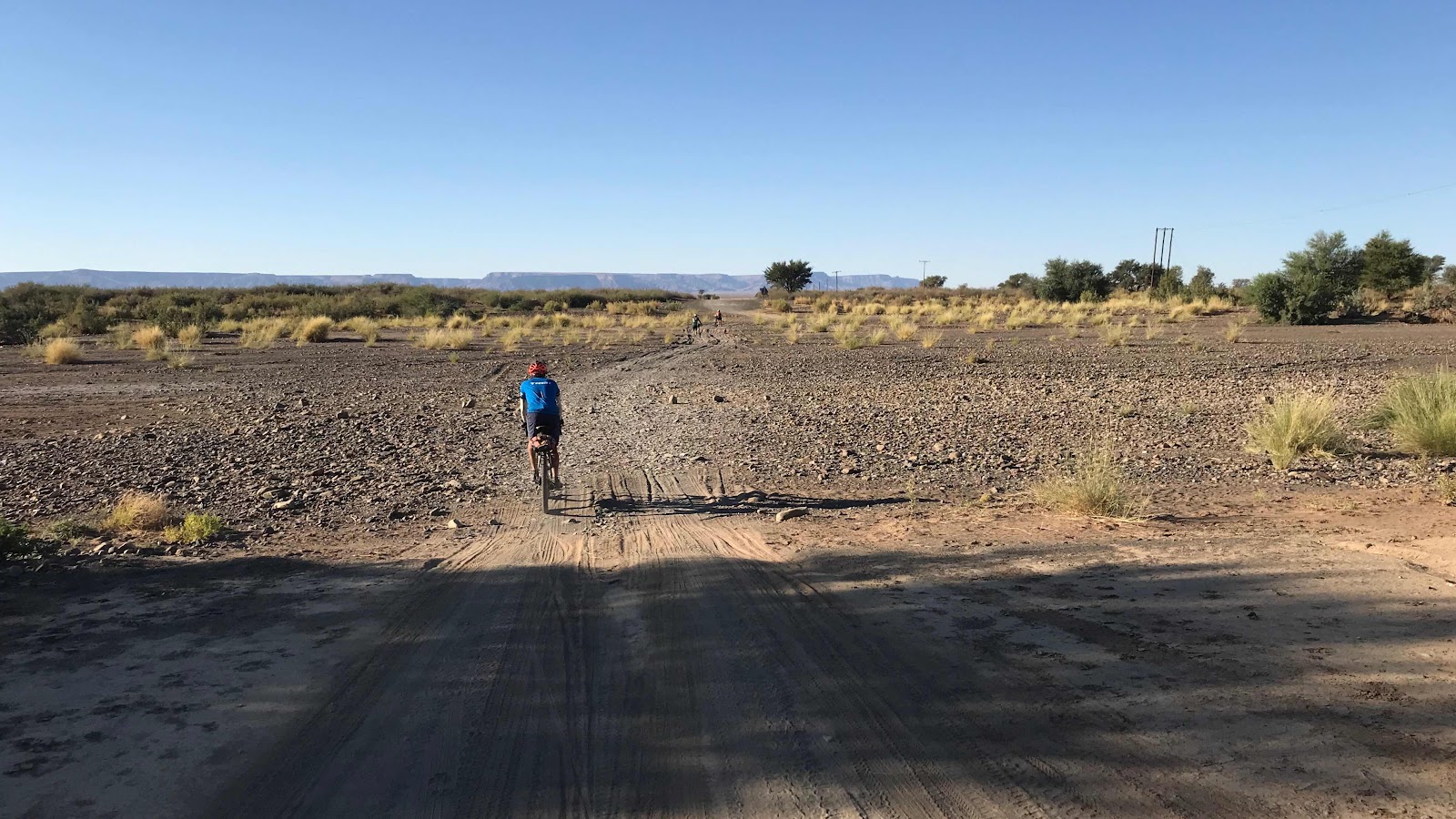 Crossing the fish river. Here it’s not in a canyon yet. And there was no water 🙂 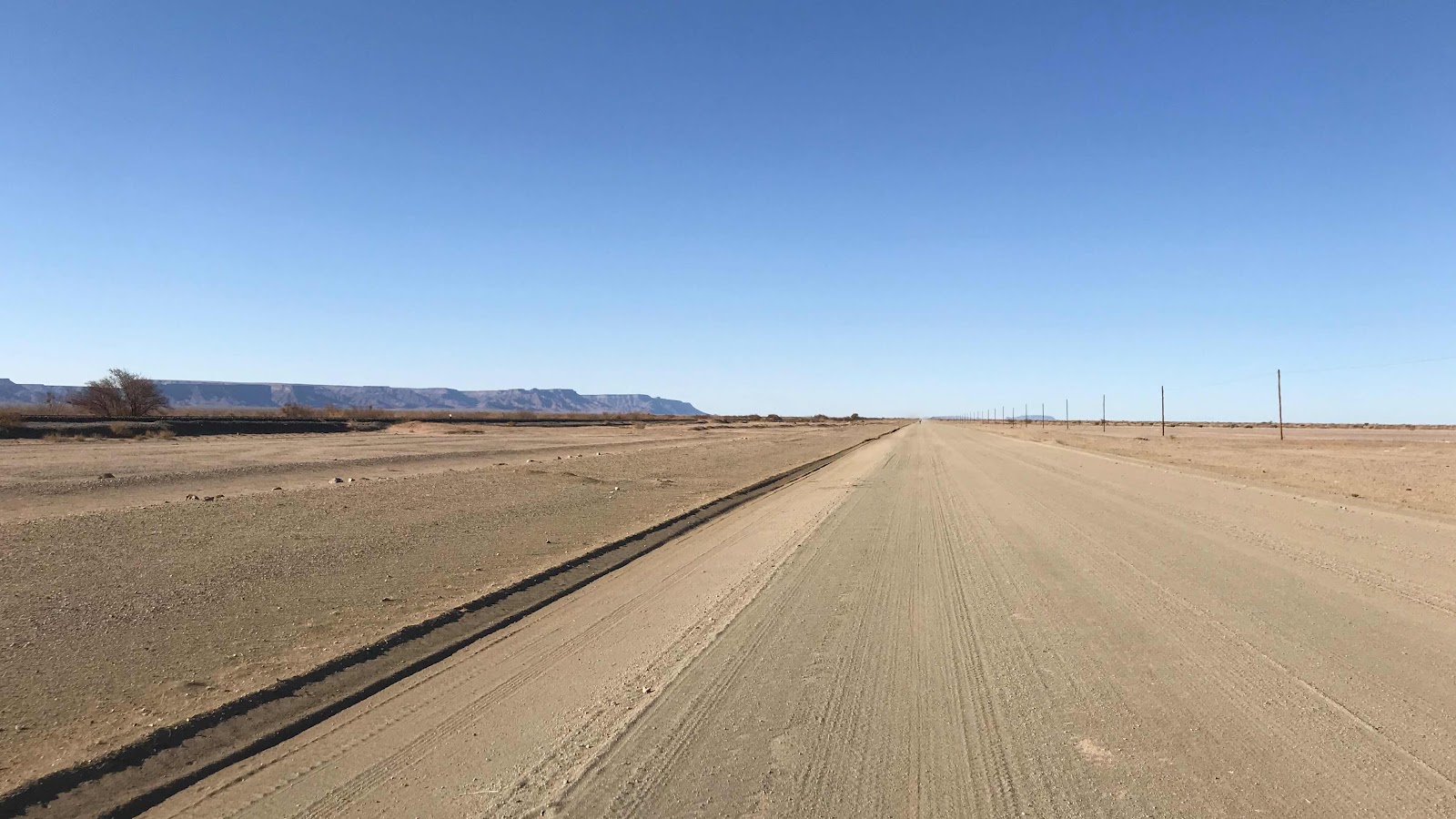 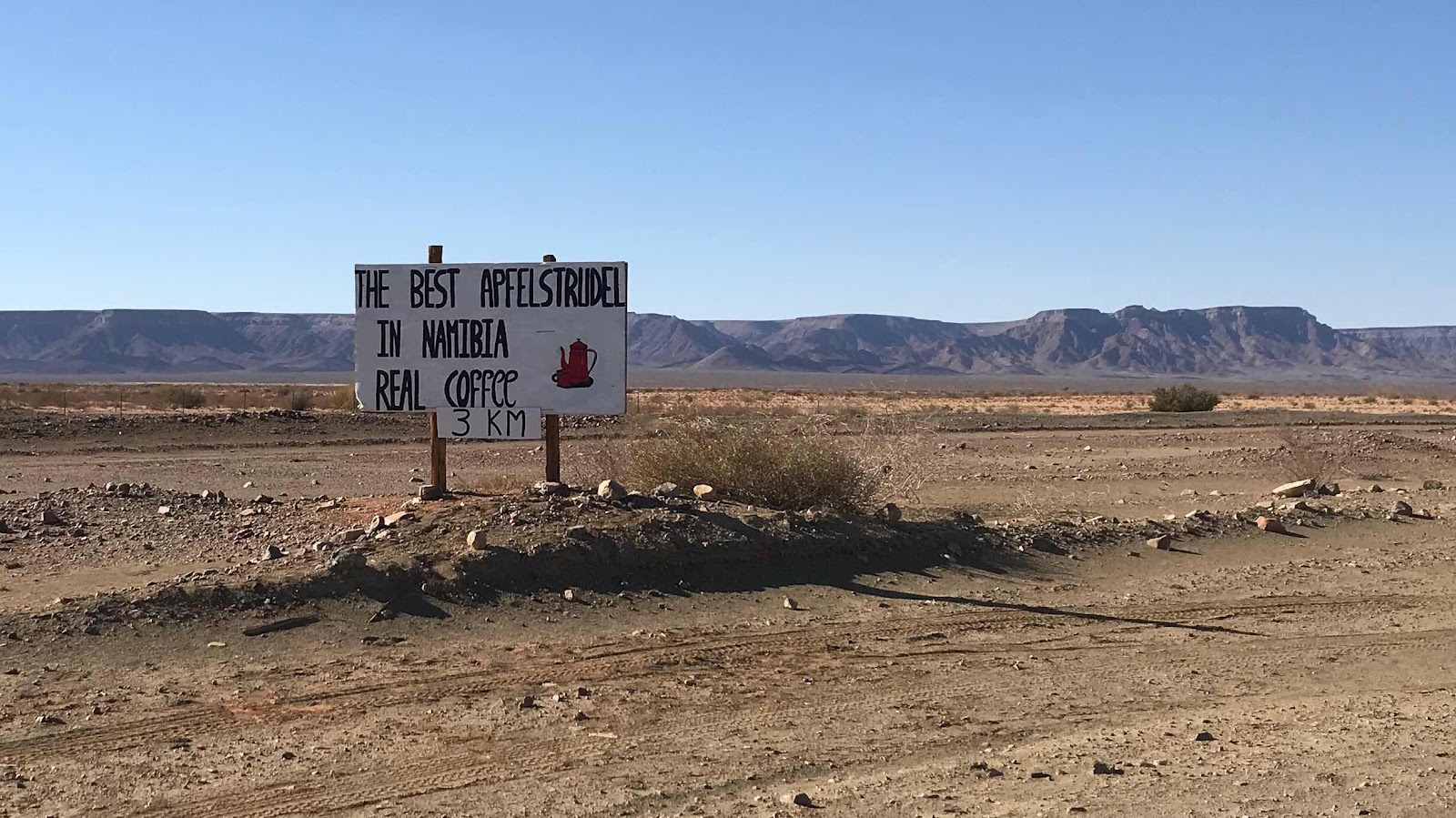 The best Apfelstrudel in Namibia! Only 3k away! 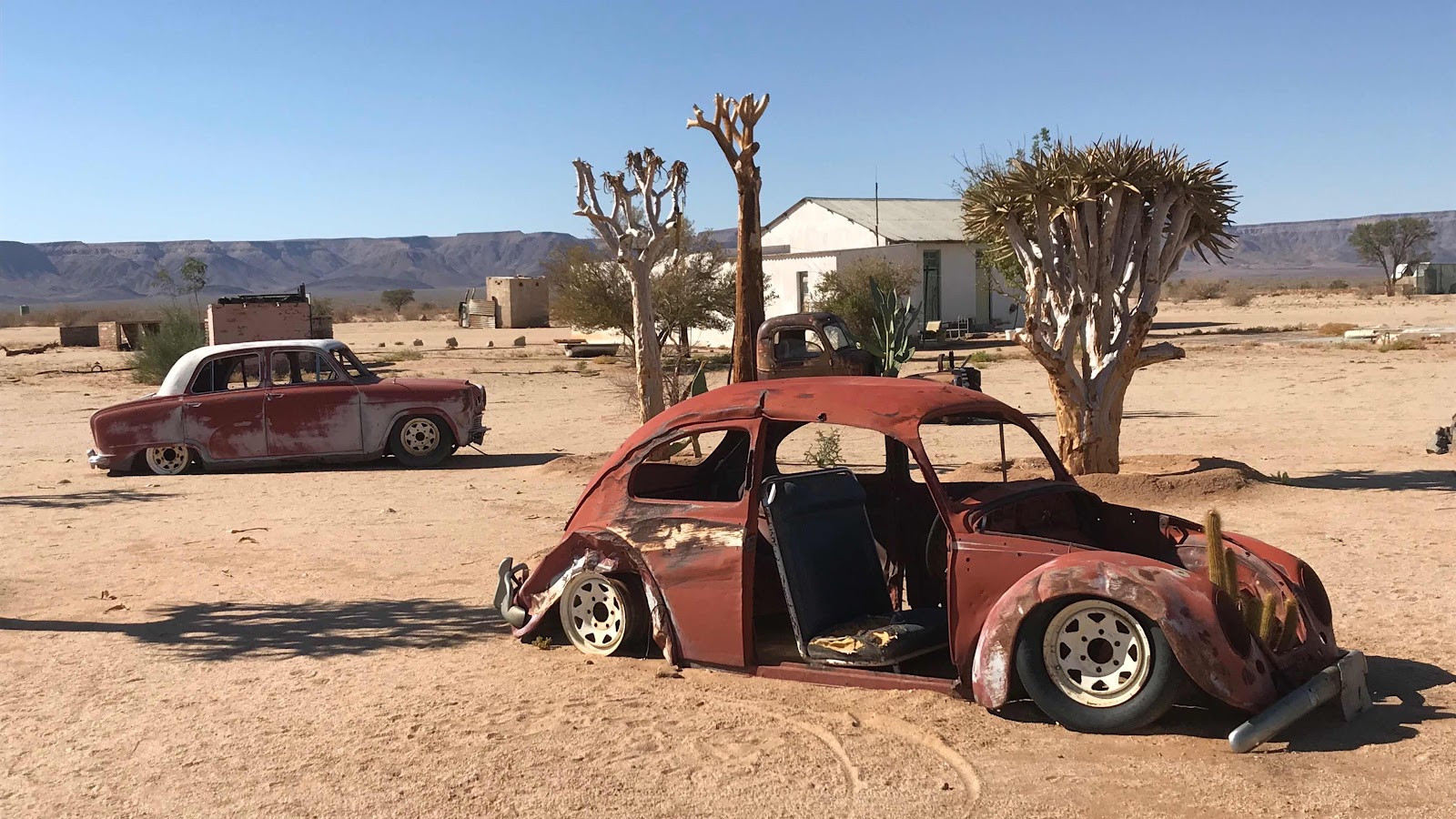 They had a nice collection of old rusted cars there! I like beatles! 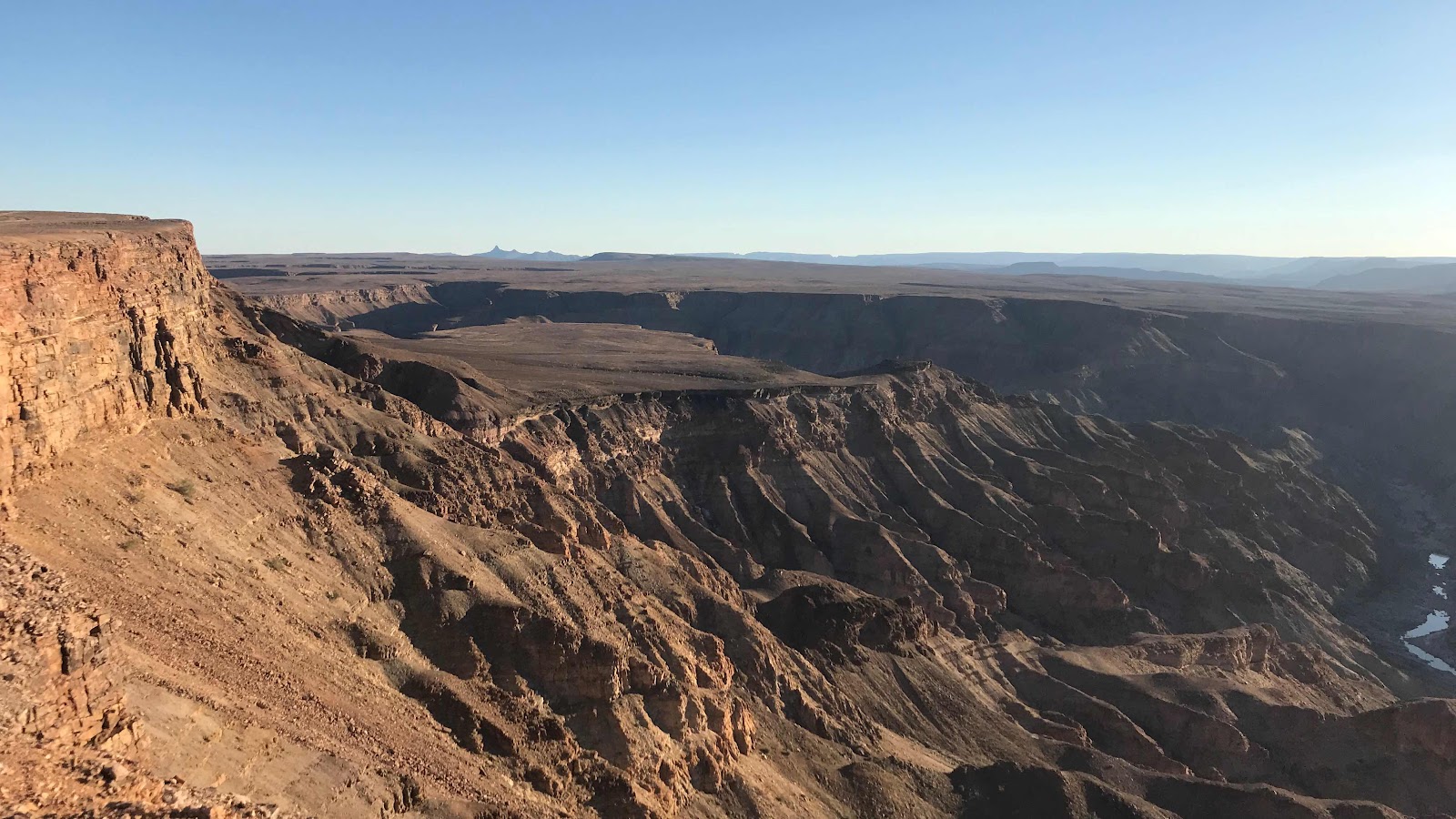 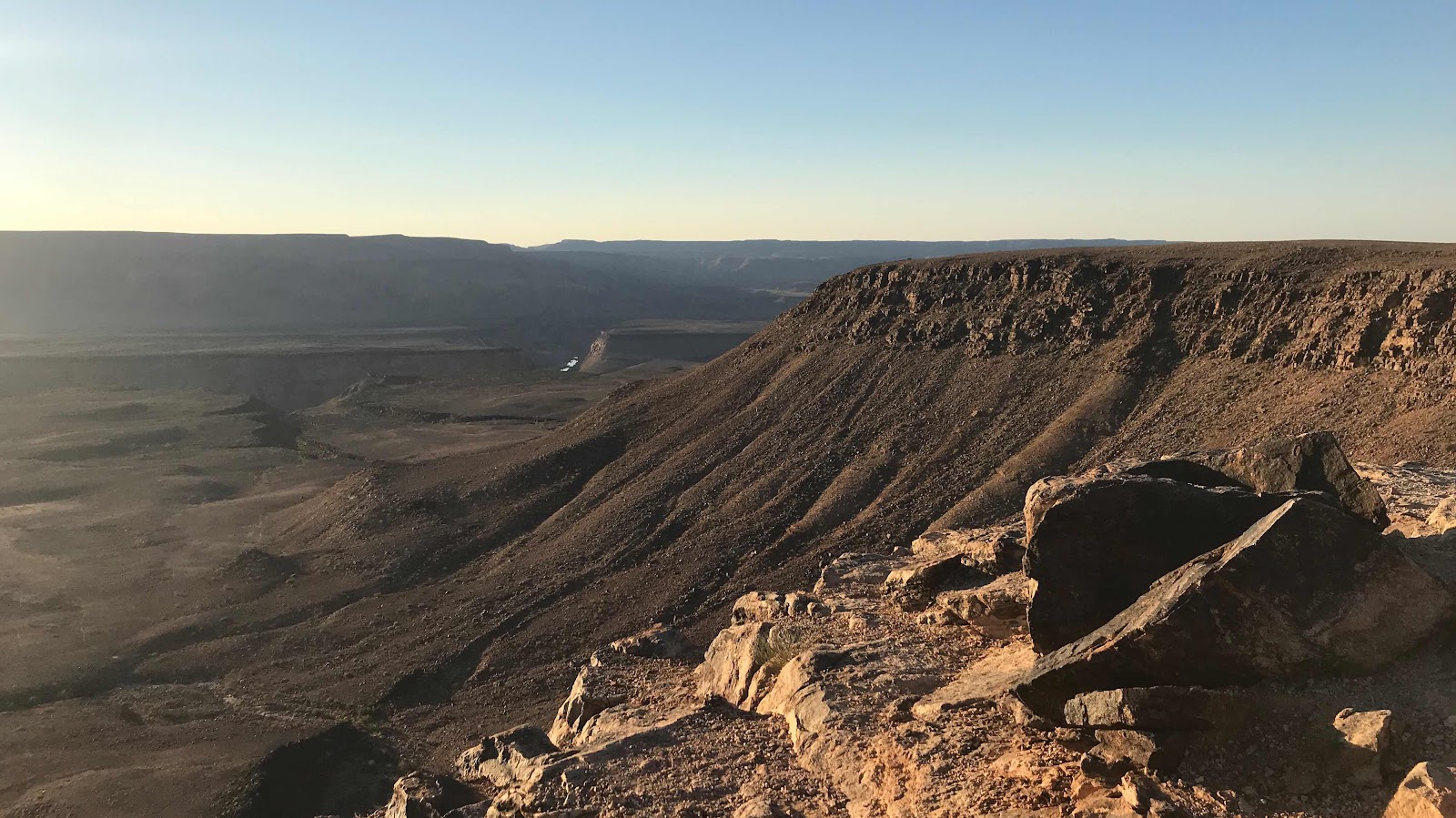 Which was pretty amazing! 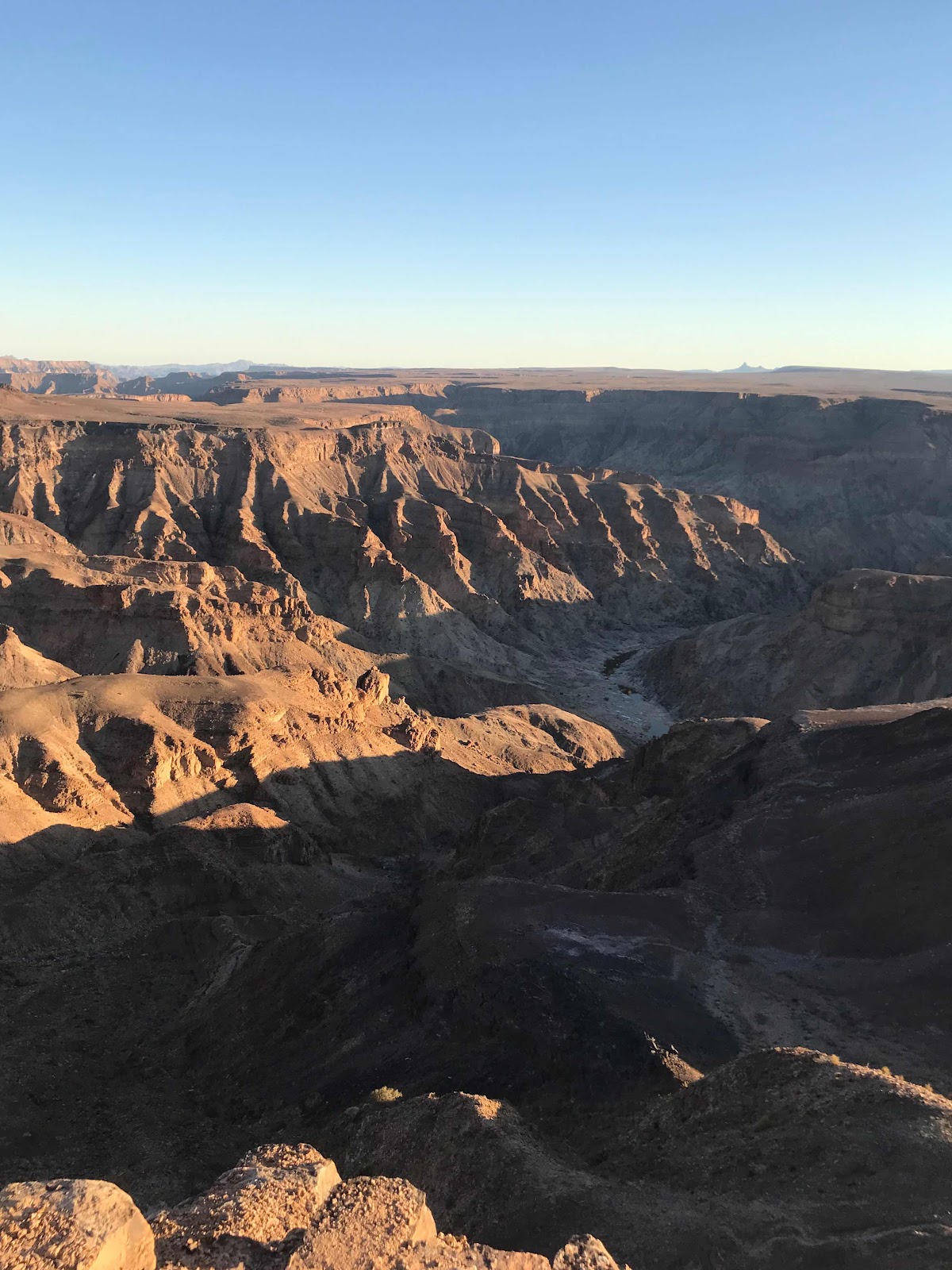 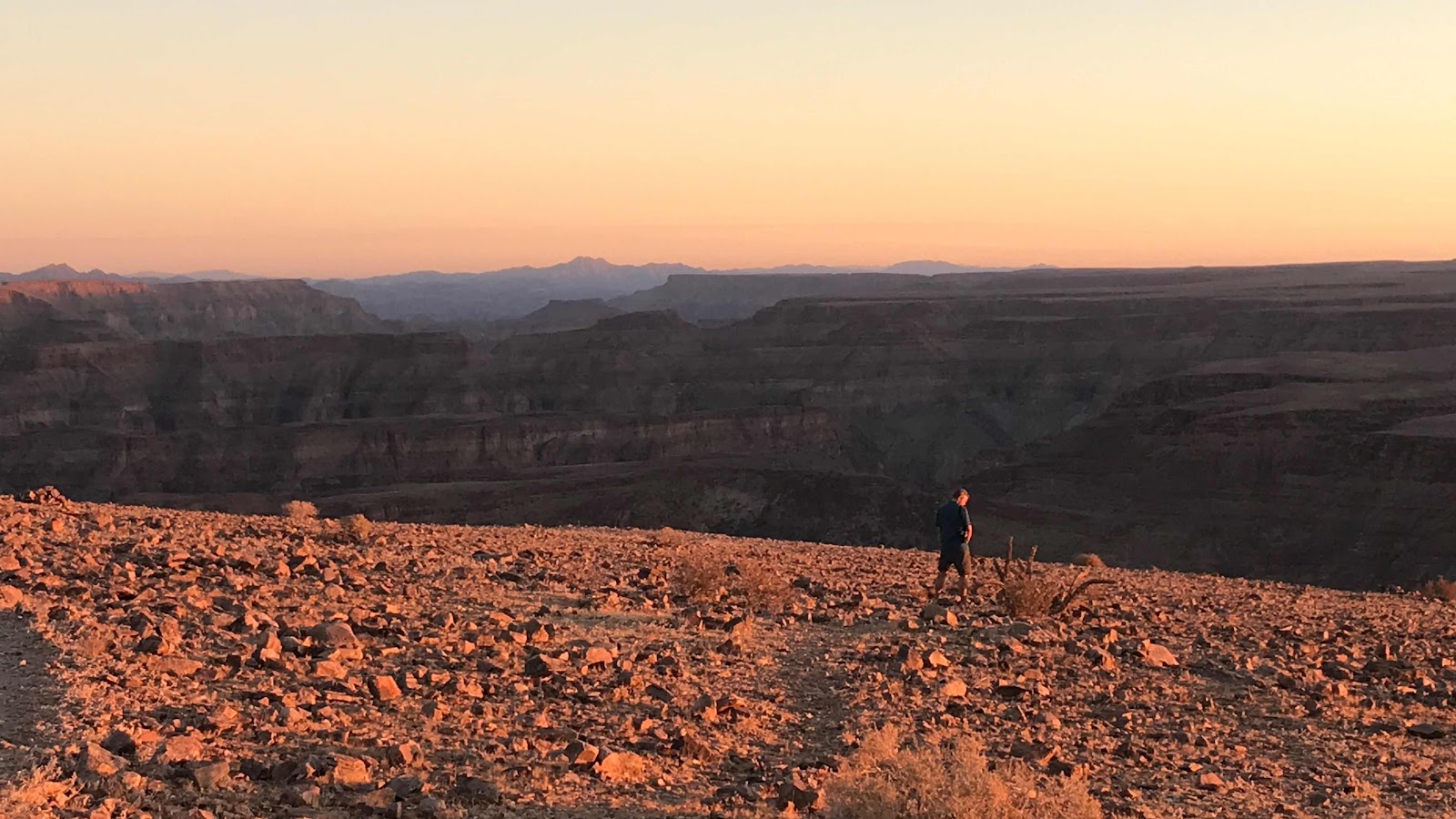 Fred admiring the view… just to give it some scale! 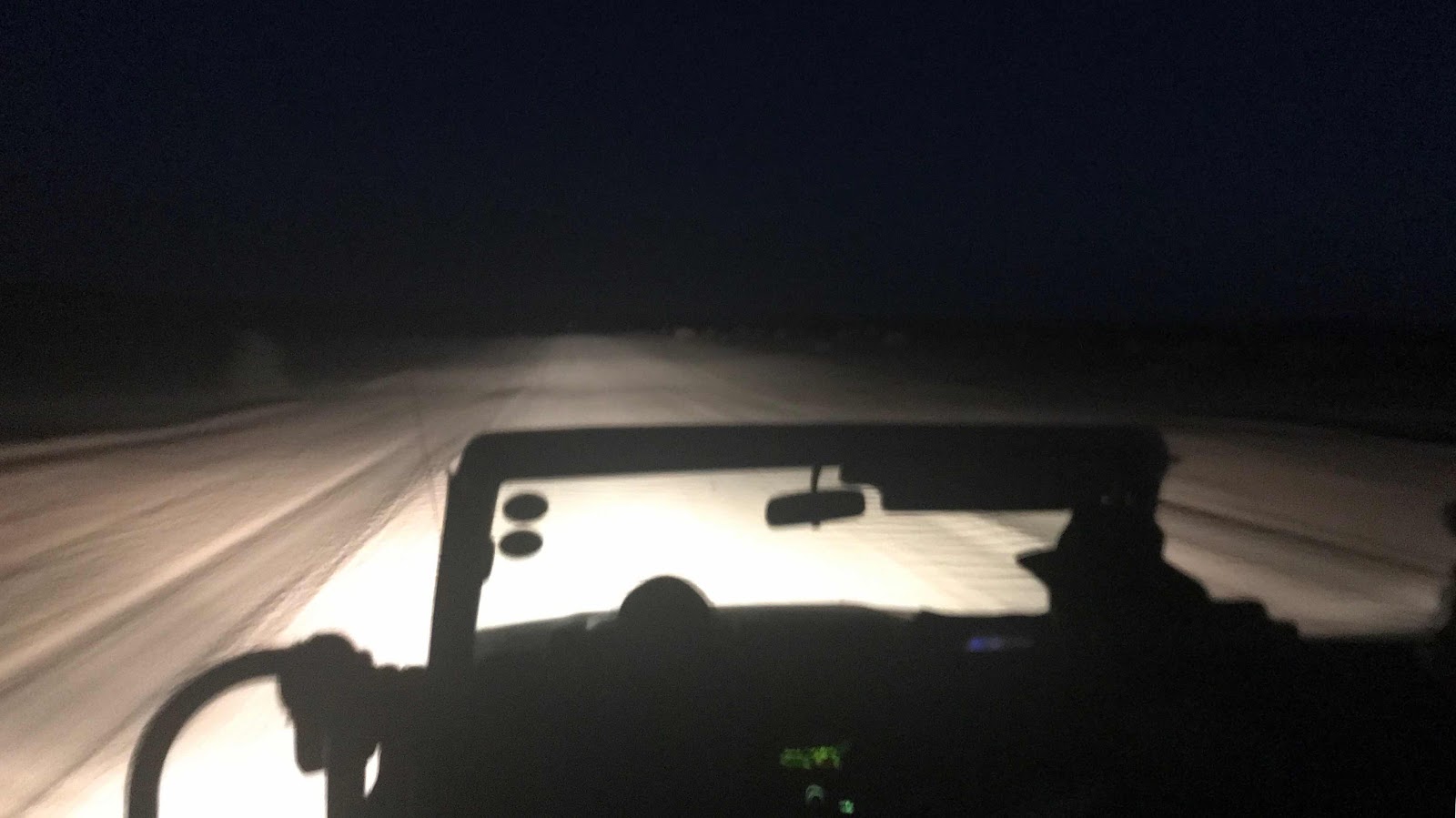 Riding back in the dark through the desert!