Restday number 2 in Windhoek. I went to bed at 0200 and had to be at the N/a’an ku se wild life sanctuary at 930, because I arranged to join a “Carnivore Feeding Tour”, which sounds a bit like a Meatlovers Pub Crawl, but actually meant feeding big cats 🙂

However, the wild life sanctuary is located some 50k from the city center and google indicated that I would need an hour to get there, so i had to be in a taxi at 830 latest. And before that time I would need to be dressed and washed and I would need to get some breakfast somewhere, so I had to be up at 730. And I’m in Africa, so I would need at least 30 minutes of slack in my schedule, so I set my alarm at 700, meaning 5 hours of sleep. Making it this late yesterday evening definetely was a mistake. And drinking 3 500ml bottles of Savannah cider added to that mistake…
Anywayzzzz, i got up at 7, got washed and dressed and had breakfast and found a taxi at 815, 15 minutes ahead of schedule. But the taxi driver had to fill up the tank and get his ID card at the other end of the city center to be able to pass the police checkpoint that we would come across. So I ended up arriving at the wildlife sanctuary at exactly 930. I’m so punctual, even when I’m hungover….
I didn’t really have higb expectations of this whole thing. “Carnivor Feeding Tour” just sounds pretty cheesy to me, and the “Wildlife Sanctuary” in Lilongwe had been a bit of a disappointment. Next to that I’ve already had some pretty amazing wildlife experiences which are hard to beat: a baby rhino and kissing a giraffe in Nairobi, a giraffe crossing the road in Tanzania, Elephants right in front of the car on the Serengeti, looking for rhinos in Livingstone, the Chobe river cruise, the Elephant highway, flying over the Okovango Delta… I mean… these experiences are getting hard to beat right?
So at 930 I was intrduced to the guide who would take myself and a British guy on the tour. We got in a landcruiser and drove through the bush a bit untill we came accross a fence, behind which were a whole bunch of baboons. Big and small, different ages, all orphans brought up by the sanctuary. The animals live in captivity and many of them will never return to the wild, but it’s nothing like a zoo. These animals have a compound ranging from 1 to 20 hectares (1 hectare is 2 soccerfields), they live in their natural habitat and they are all originally from Namibia. The only difference is that these animals got used to humans so much that they are not affraid of them anymore and that they even might go looking for them, creating potential dangerous situations for themselves and for people.
So we see baboons all the time on the side of the road. Even the day before yesterday when we rode into Windhoek we saw a whole bunch of them. Yet because they were now behind a fence they didn’t run away, so we could see them very well up close. And the guide had some special bond with baboon Geofrey, so everytime he called his name, Geofrey made stereotypical monkey sounds and beated with his hands on this chest.
So with the baboons we were of to a good start. Next was the pack of 10 wild African Dogs. 10 brothers and sisters, abandoned by their mother and raised by the samctuary. Beautifull animals and again we were able to get very close. Unfortunatrly there are only 800 of them left in the whole of Namibia.
Next up, Carnicals. Lynx-like wild cats. At the prospect of food they came to the fence so we could have a proper look at them. And after we fed both of the cats a chicken, they scurried of into the bush to find a nice shady place to eat their meal.
Now the cats became a bit bigger: Leopards, three of them. With their characteristic black rings, they merge perfectly into their surroundings. We fed them chunks of giraffe meat and they too disappeared to a quiet place to eat.
After the leopards: cheetahs. Much lighter and much more agile than the leopards. And no black rings, but black spots. We were lucky enough that one of them stayed near the fence after receiving his carnivore meal.
Last: Lions. A male and a female. We were warned that the male is quite aggressive and that we would not be allowed to leave the car, because he would storm the fence. When we reached the compound there was nothing to be seen, but after some five minutes the female appeared. And not long after that the male, who dispite us still being in the car did indeed storm the fence. Everybody’s seen Lions in the zoo right, but this was just scarily intimidating, whith this deep intrinsic roar and shear force with which he leaped forwards. The fence seemed eerily thin at that moment.
After the beast had calmed down a bit the guide threw his meat over the fence and this big heavy muscular cat jumped into the air to catch it, and after that strolled easily back into the bush. The female did the same.
So yeah, after all those pretty amazig wilife experiences I’ve already had, I get to add another one. The day of the big cats in Windhoek. The Carnivore Feeding Tour. It was like being in Jurassic park, with the guide explaining in detail where the animals are from, what happened to them, how they normally live, how they normally hunt, what they eat and how they eat it… it was pretty cool 🙂
After the tour ended I took the taxi back to town and lazed around a bit at the pool and in my hotel room. Tomorrow we’ll start the dirt road. I really hope that I have a good night sleep tonight,  because last night’s 5 hours have not really contributed to recovering of last week’s long rides. At least I had fun yesterday evening, and I had a lot of fun this morning! 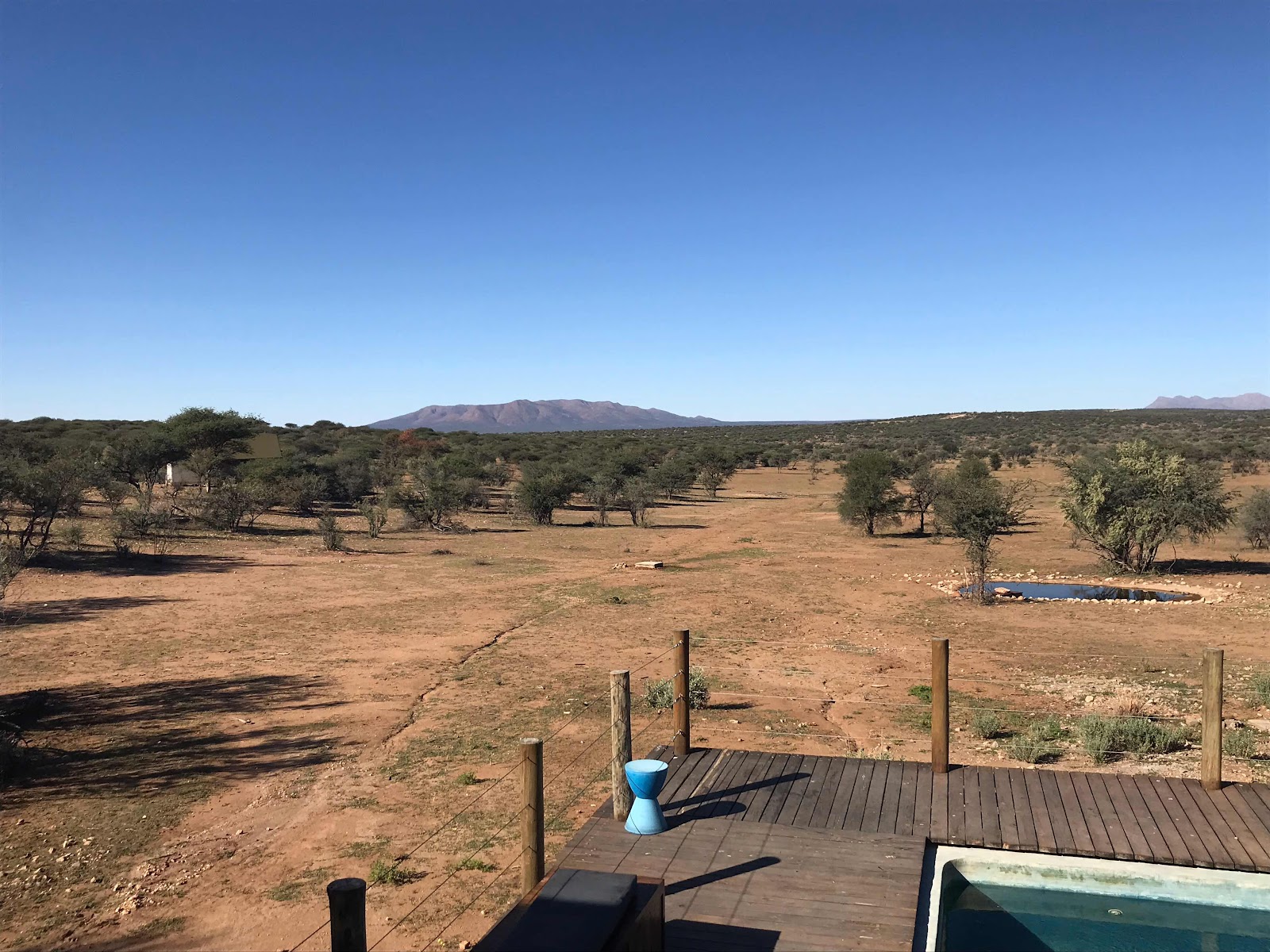 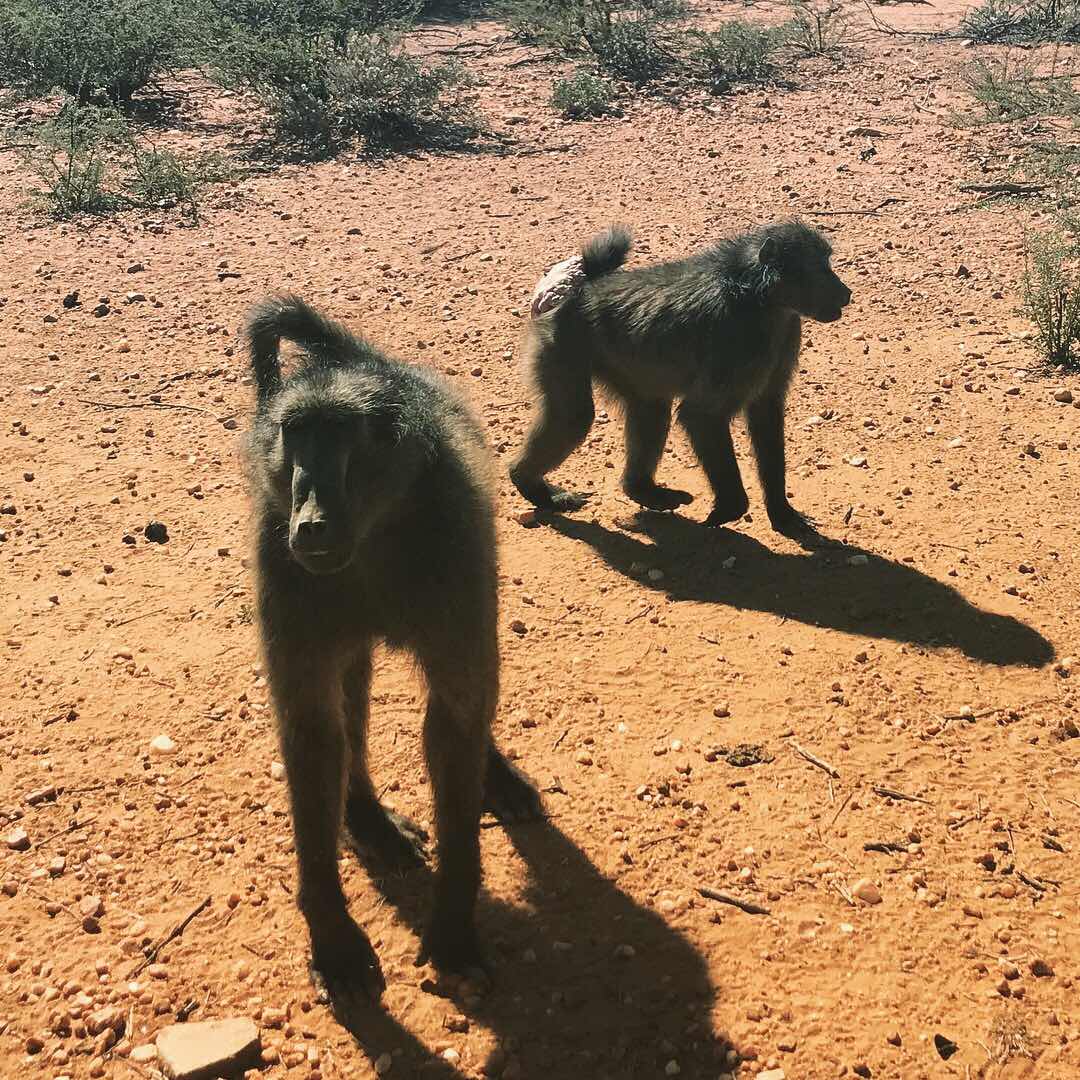 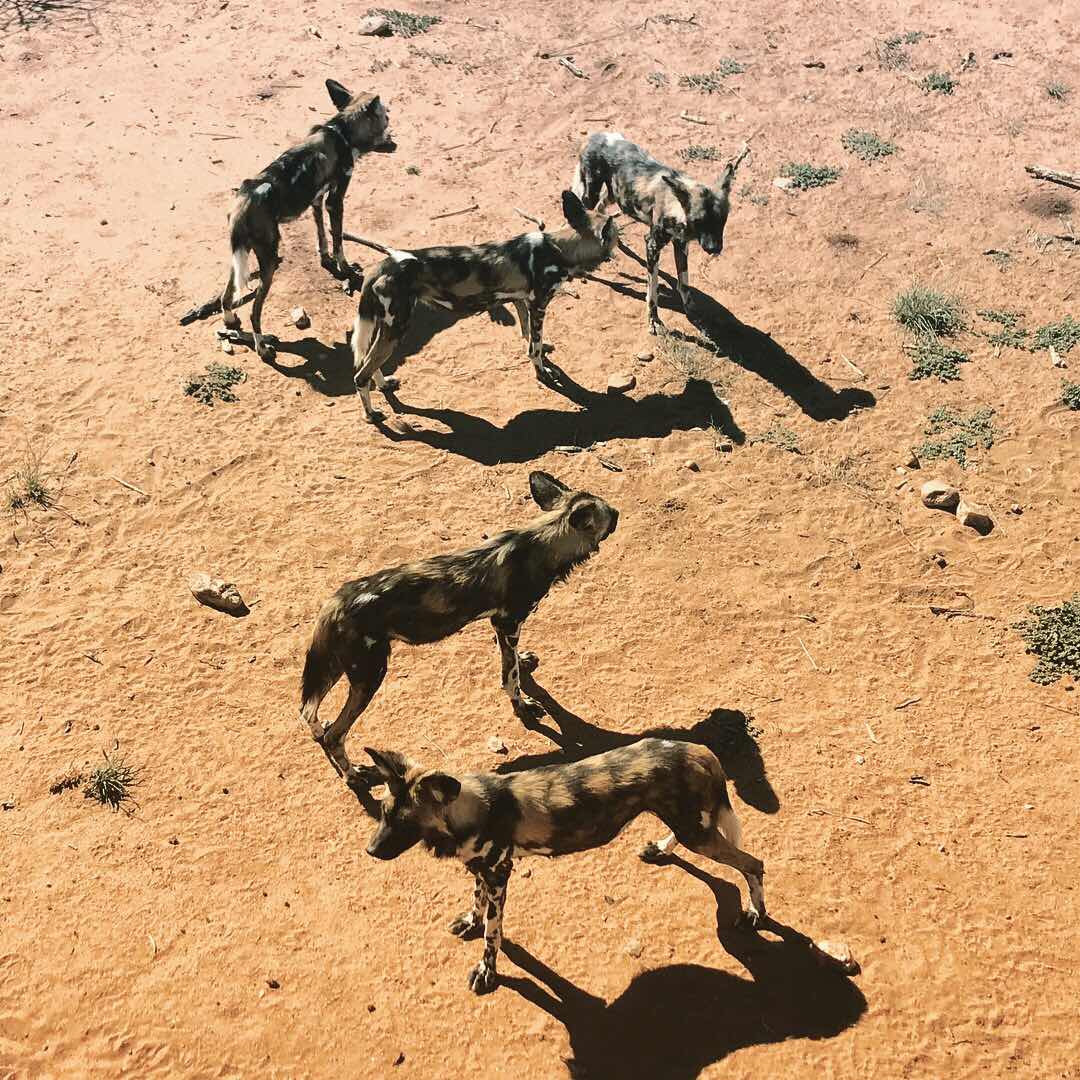 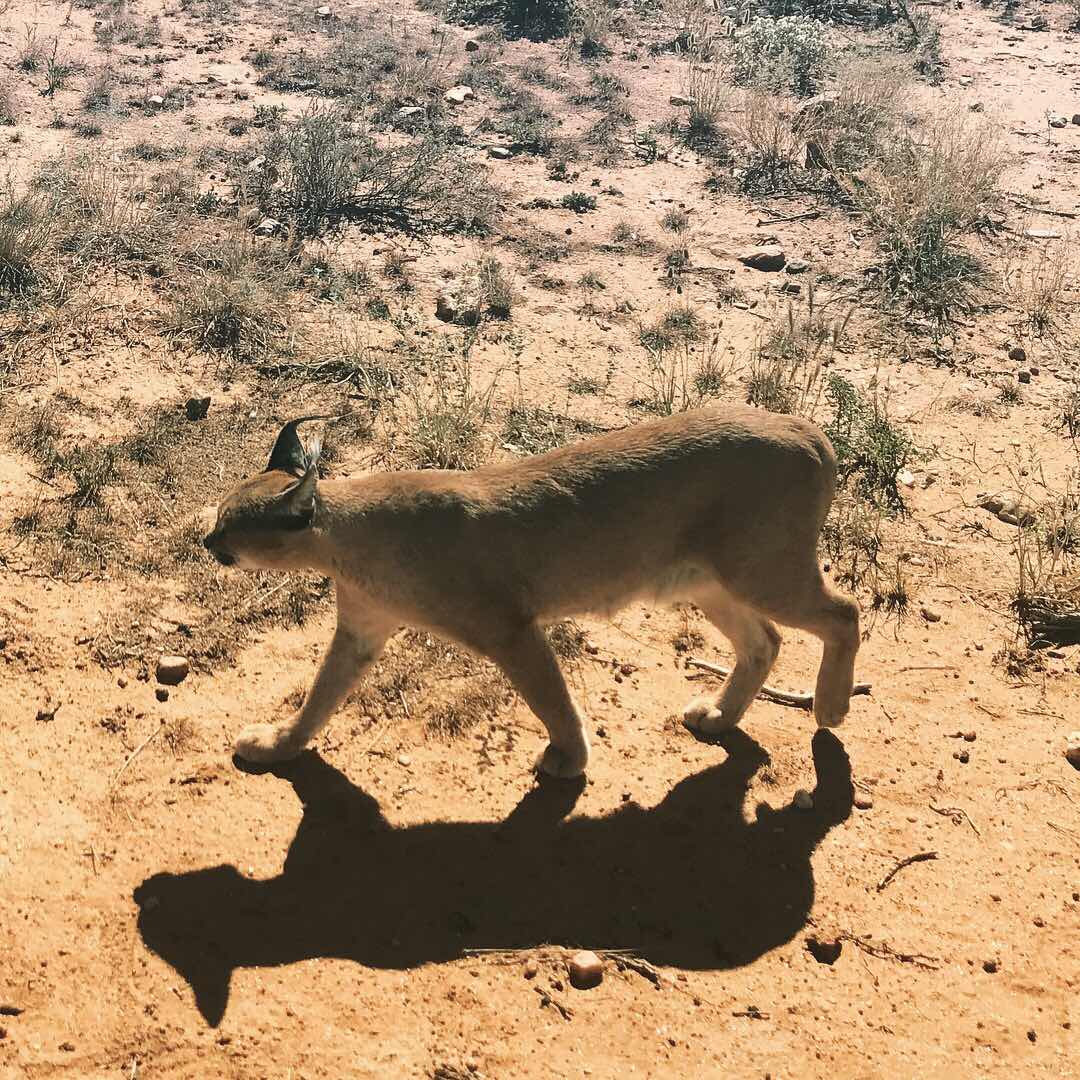 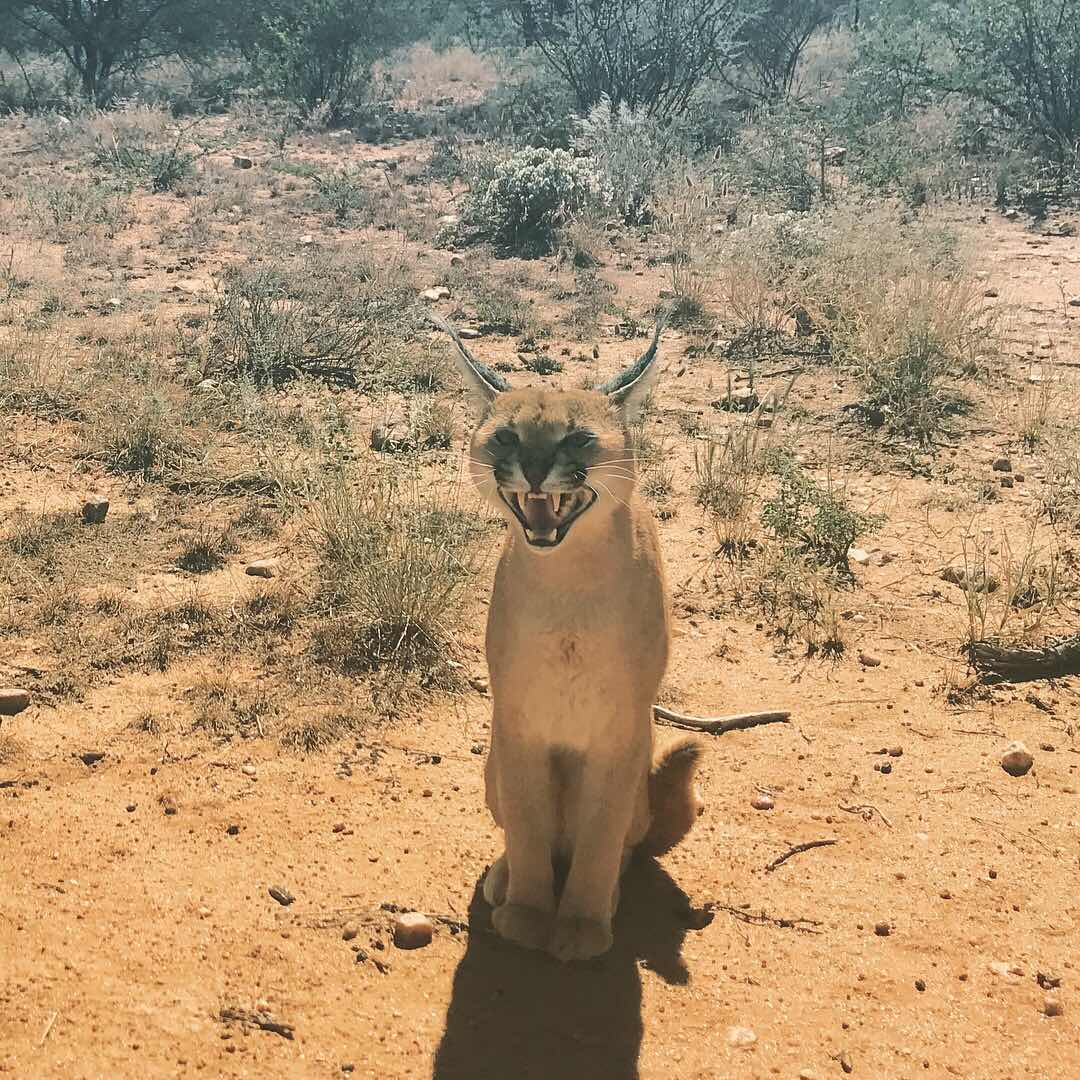 Not looking too happy… 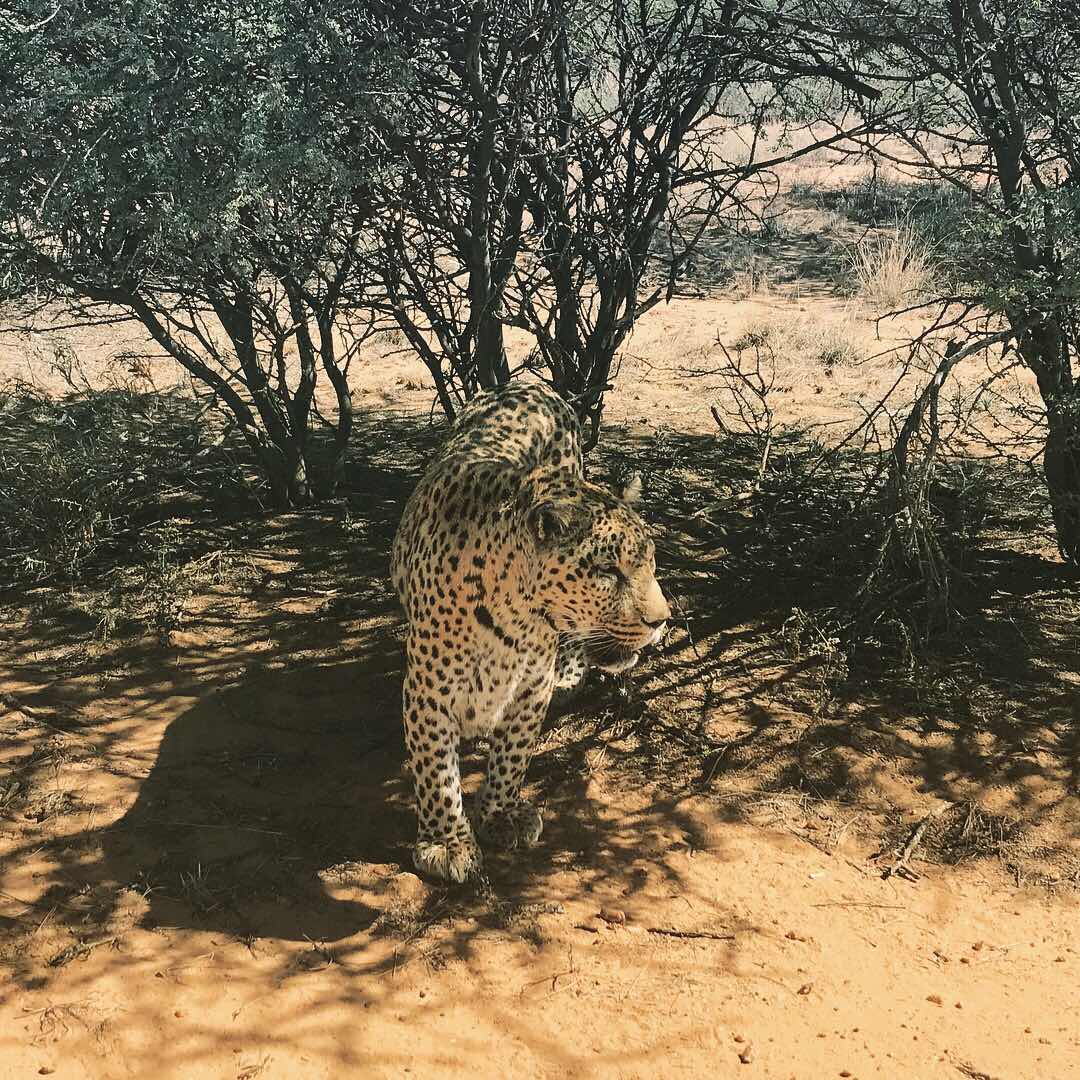 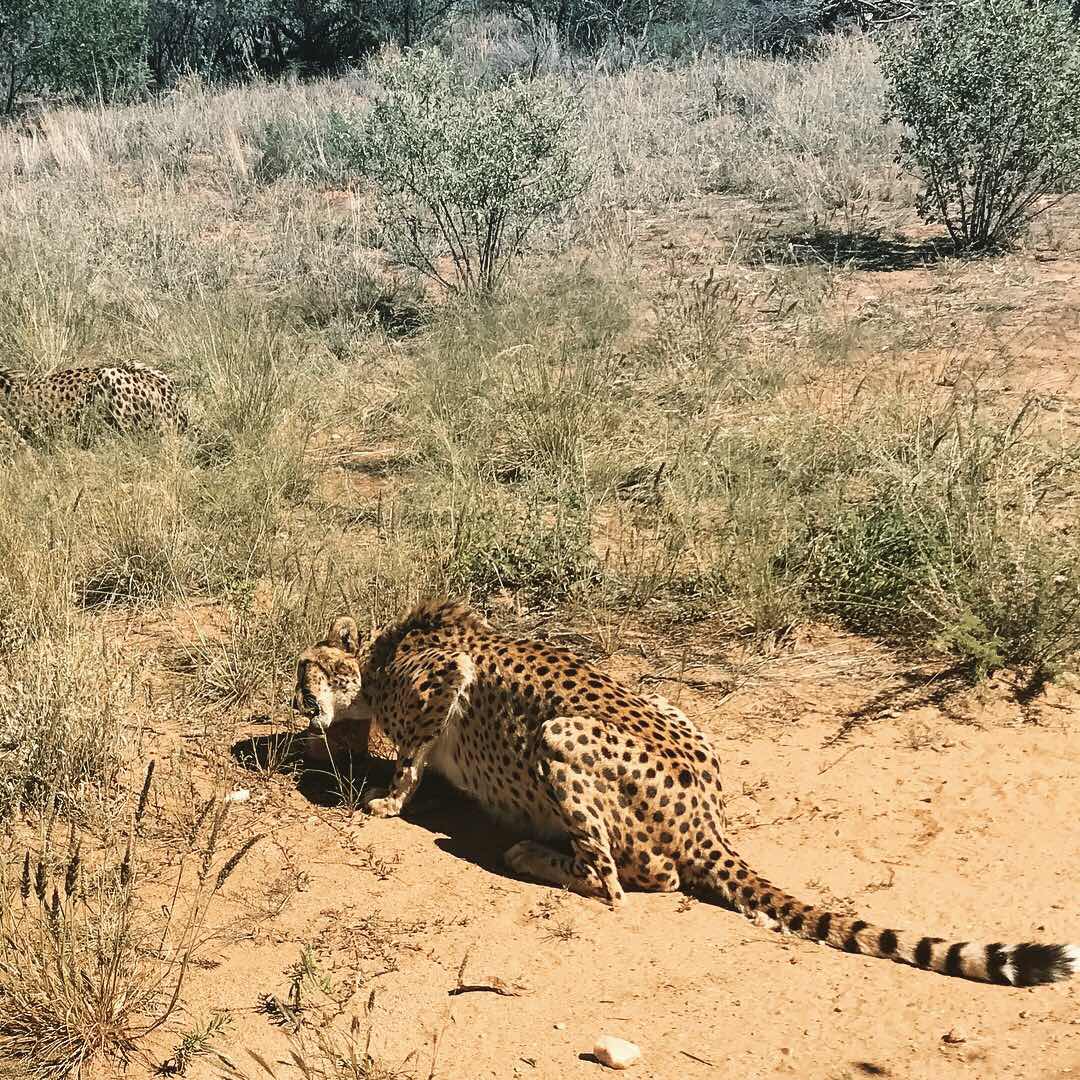 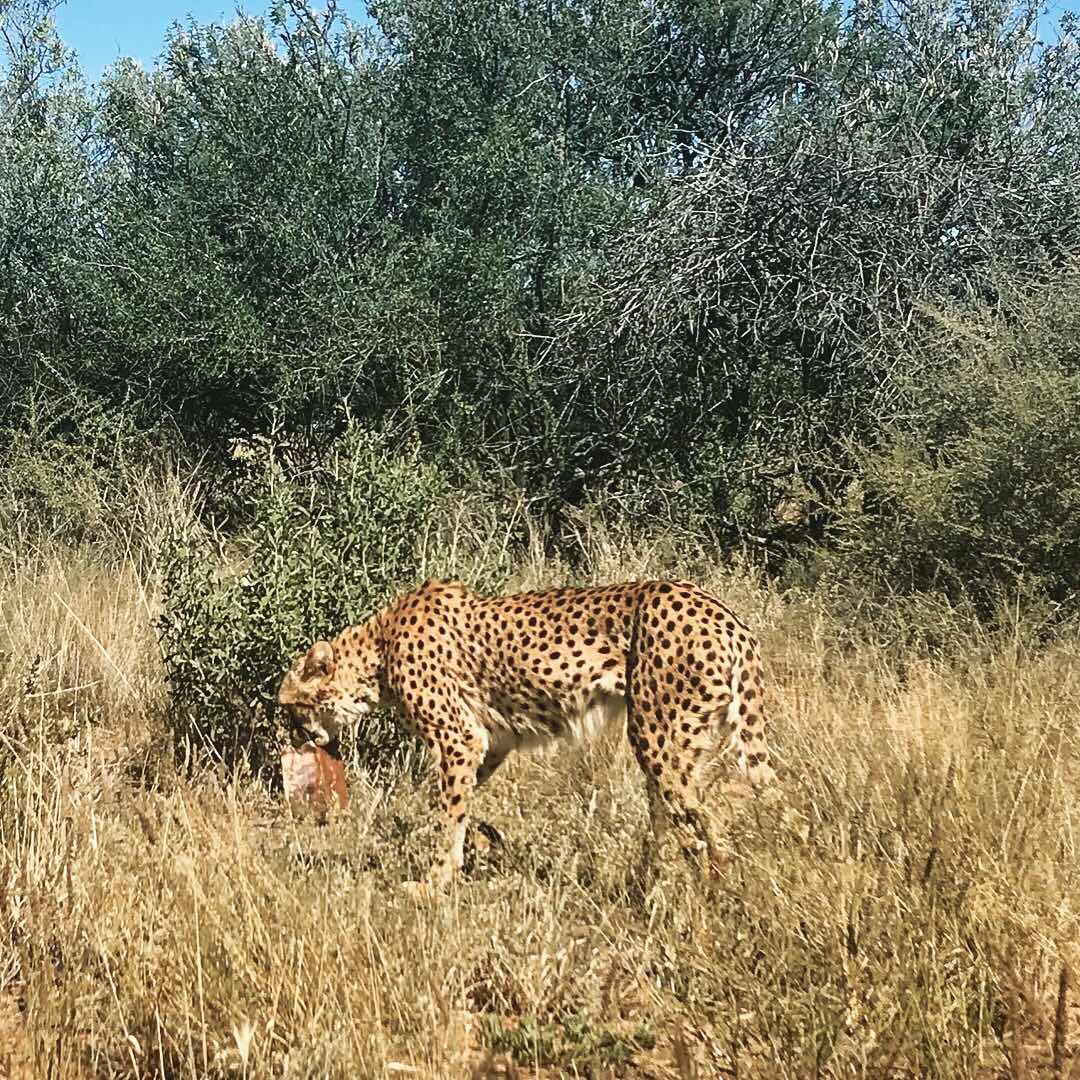 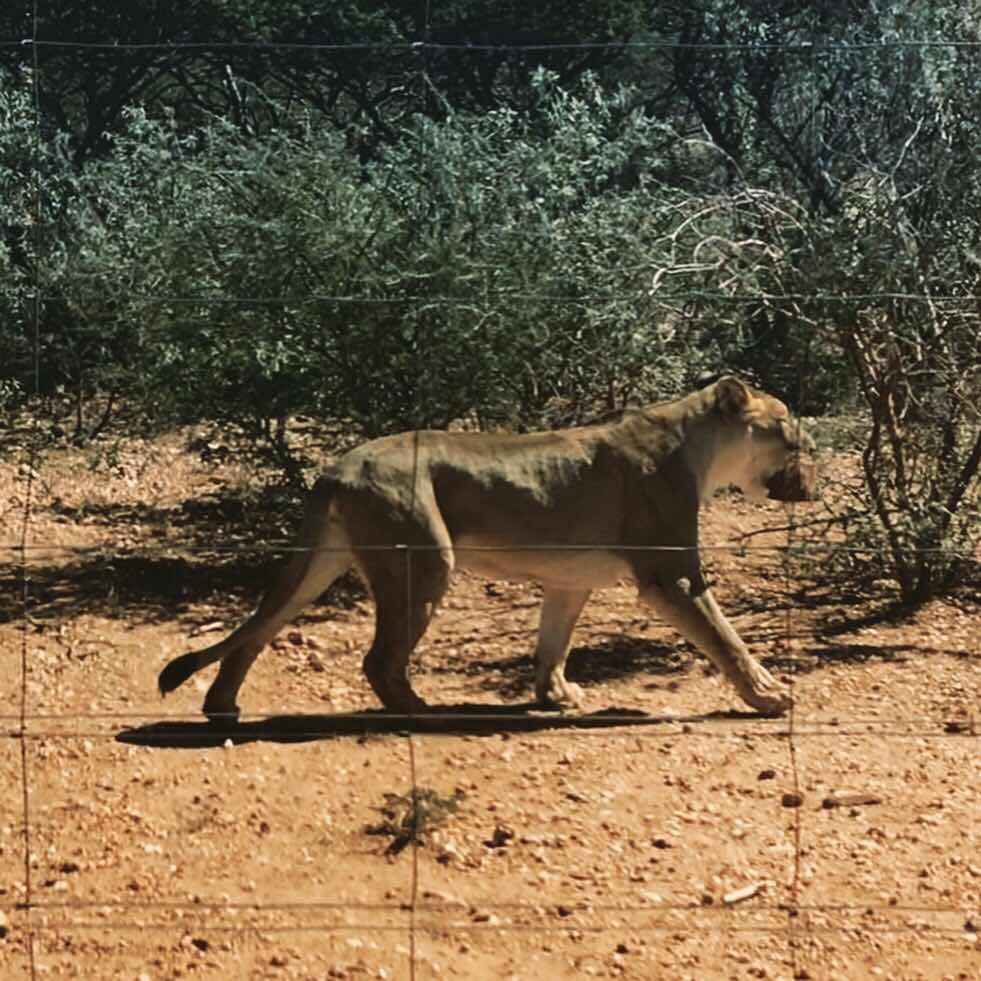 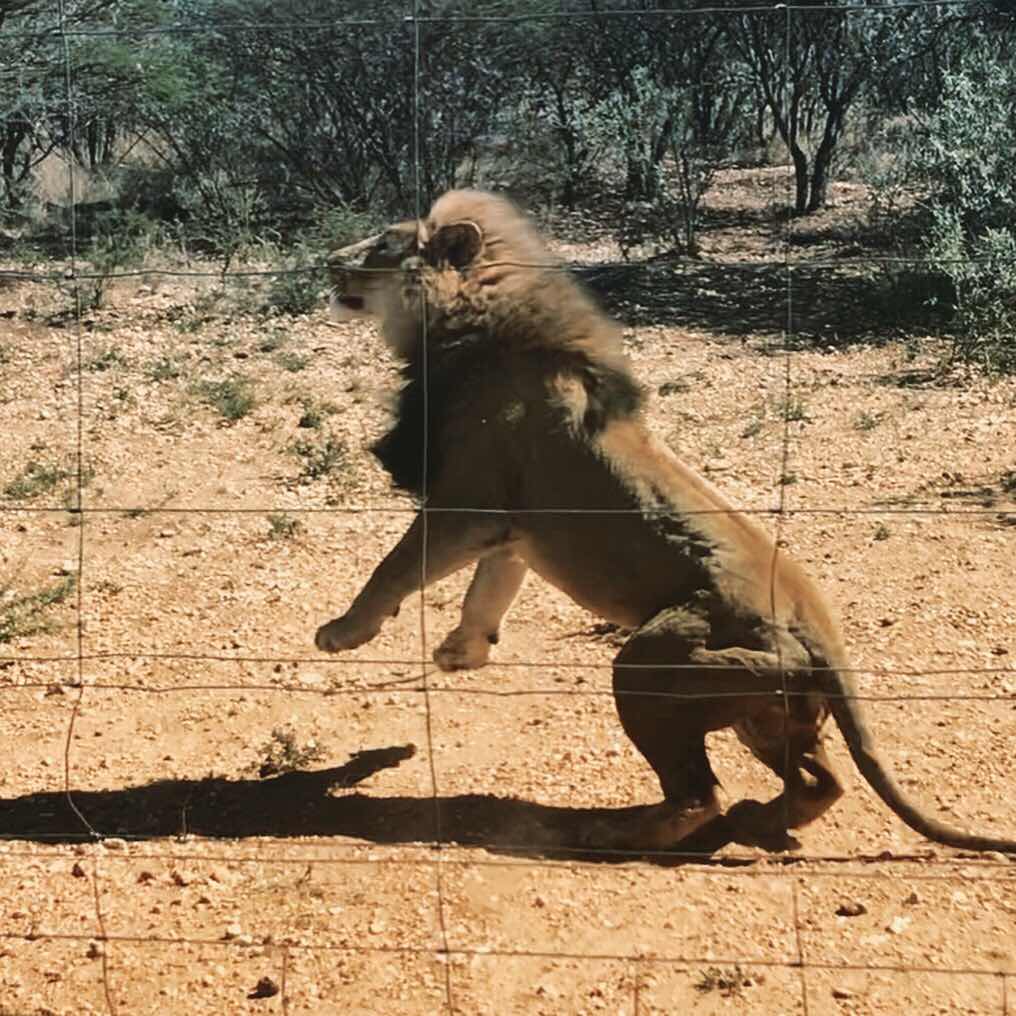 Mr Lion, leaping into th air to get dinner!