Today was our last day in Ethiopia and this afternoon we crossed into Kenya, our 4th country, after almost 3500k of cycling!

I left Ethiopia with a double feeling. Not even a per mille of the people in Ethiopia is just a bit weird and it’s unfortunate that they cast a bit of a shadow over all the positive experiences I had here. And I really want to remember these positive experiences. So for that reason I will only write about what I like about the country and not about the things I disliked 🙂 Here it comes:
I like Ethiopia’s stunning landscapes. The mountains and the accompanying views. The rolling hills and the undulating roads. How it looked like uncultivated southern Europe in the highlands and feels genuinely African in the lower parts. How it’s the source of the Blue Nile and how this river has carved its way into the rocks over millions and millions of years.
I like the countries history. About the supposed intercourse between king Solomon and queen Sheba and all the royal descendents that came from it, making Ethiopia an ancient and original Christian country. About how they invited the Portugese inand later threw them and their Catholicism out again. About how they fought of the English and the Italians, remaining the only African nation that never got colonized. About Haile Selassie and the Rastafaris. About the famines and the aid.
I like the people. How they dress like medieval herders in the north, with their sticks and cloaks. And how colorfull their clothing became in the south. How they dance from their shoulders. And how the kids came running towards the street when they saw us passing by. Waving, screaming you you you. Big eyes, wide smile, genuinely happy. And how their parents were gratefull for how we gave their kids just this little bit of attention. A high five, a fist bump. Anything.
I liked the wildlife we encountered. The hippos at lake Tana. The baboons in the blue Nile gorge. The ostriches and warthogs and impalas at Ostrich Camp. The giant maribu storks, the pelicans, the eagles, the banana beaks and all the other different birds in a wide variety of size and colour. The return of the camels in the south while I was sure that we had seen the last of them when we left Sudan. All the goats, sheep, cows and donkeys that randomly crossed the road without taking any notice of us cyclists…
I like the architecture. The medieval buildings in Gondar. The way they construct the round thatched roofs on the little huts. The round orthodox churches, painted in the colors of the Ethiopian flag. The sometimes weird color combinations that people use to paint their homes. The simple but colorfull paterns they use for decorating their houses. The massive building spree in Addis. The city’s impressive new infrastructure and tramline… The way they were building that hotel in Bahir Dar, with the ingenious scaffoldong.
I would defintely say that there are more positives to Ethiopia than that there are negatives 🙂 And I am glad that I can leave this country with these positives in memory! We had a great time! Goodbye Ethiopia! Now it’s time for Kenya! 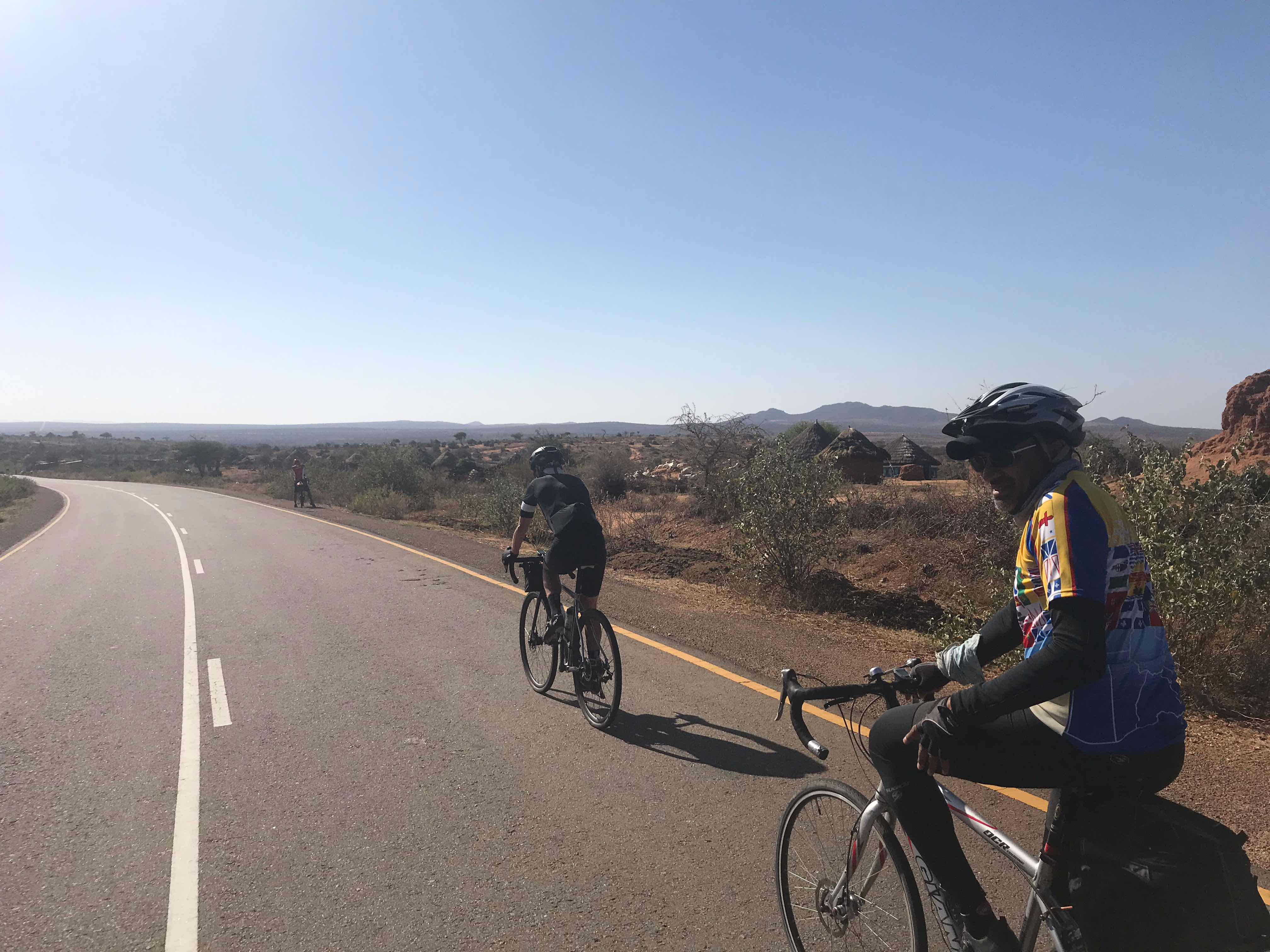 Riding with Vik and Baldr, making sure to reach the border well before noon to prevent us from gettinng stuck there because of the lunch time of the immigration officers… 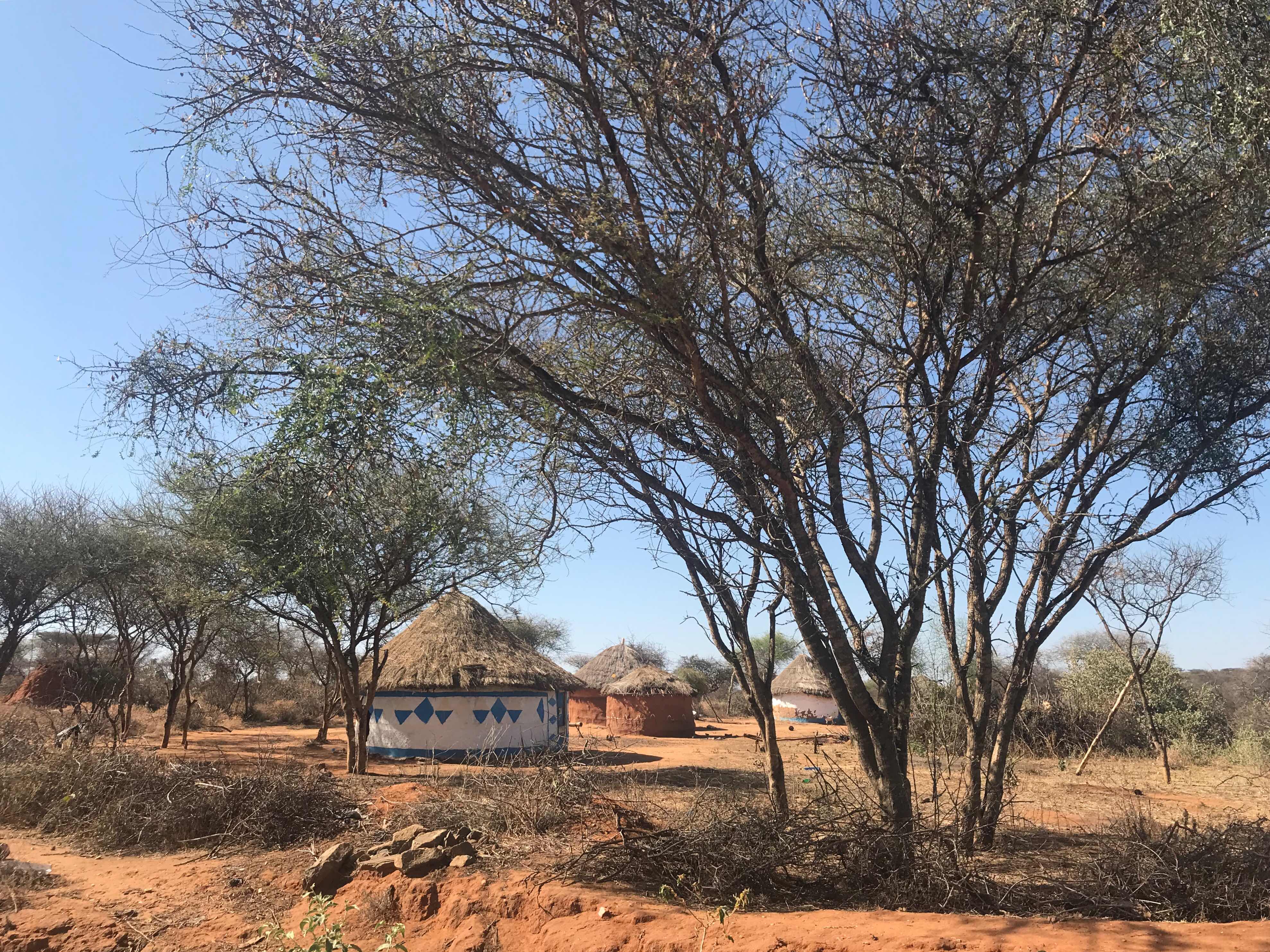 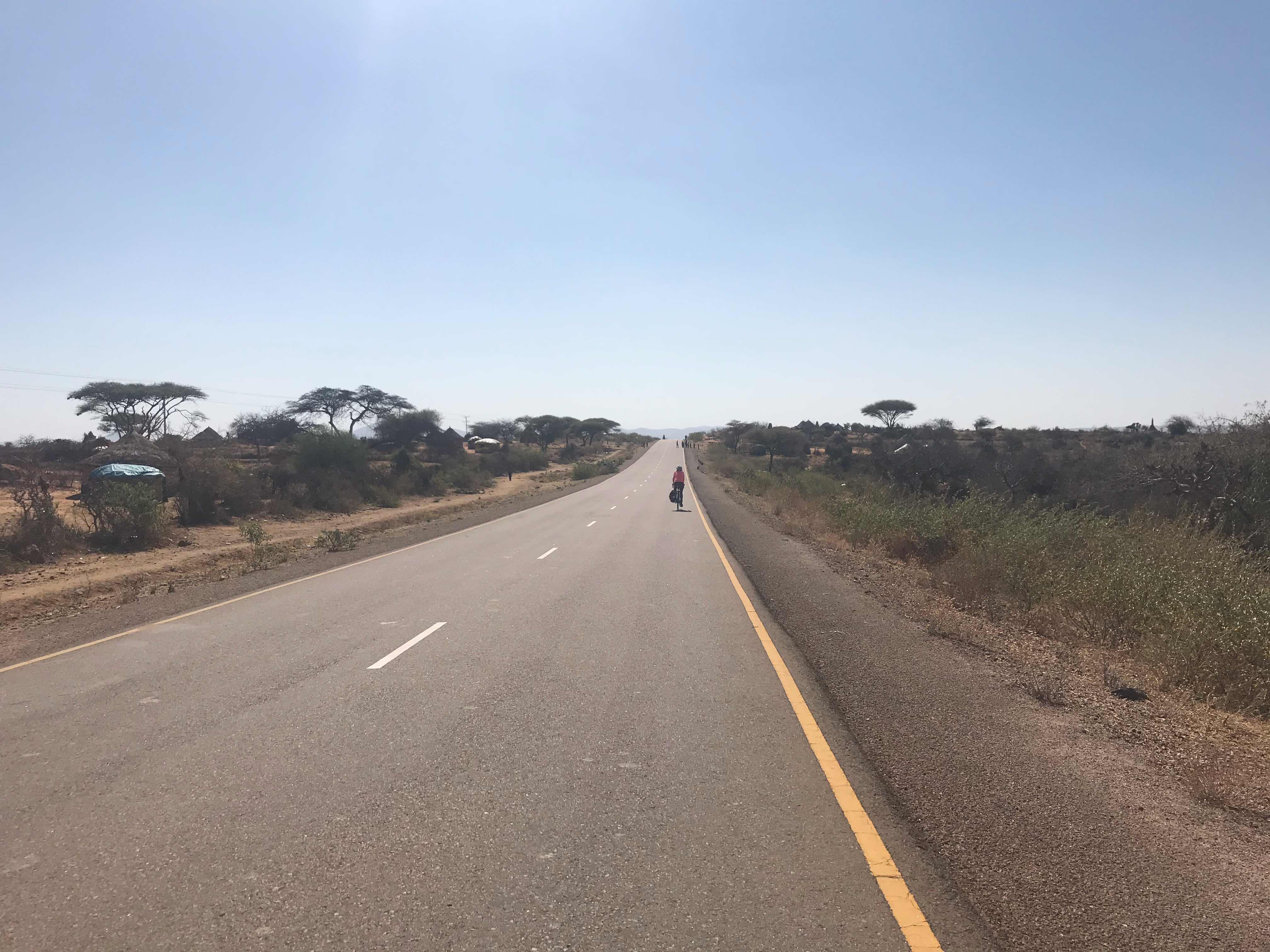 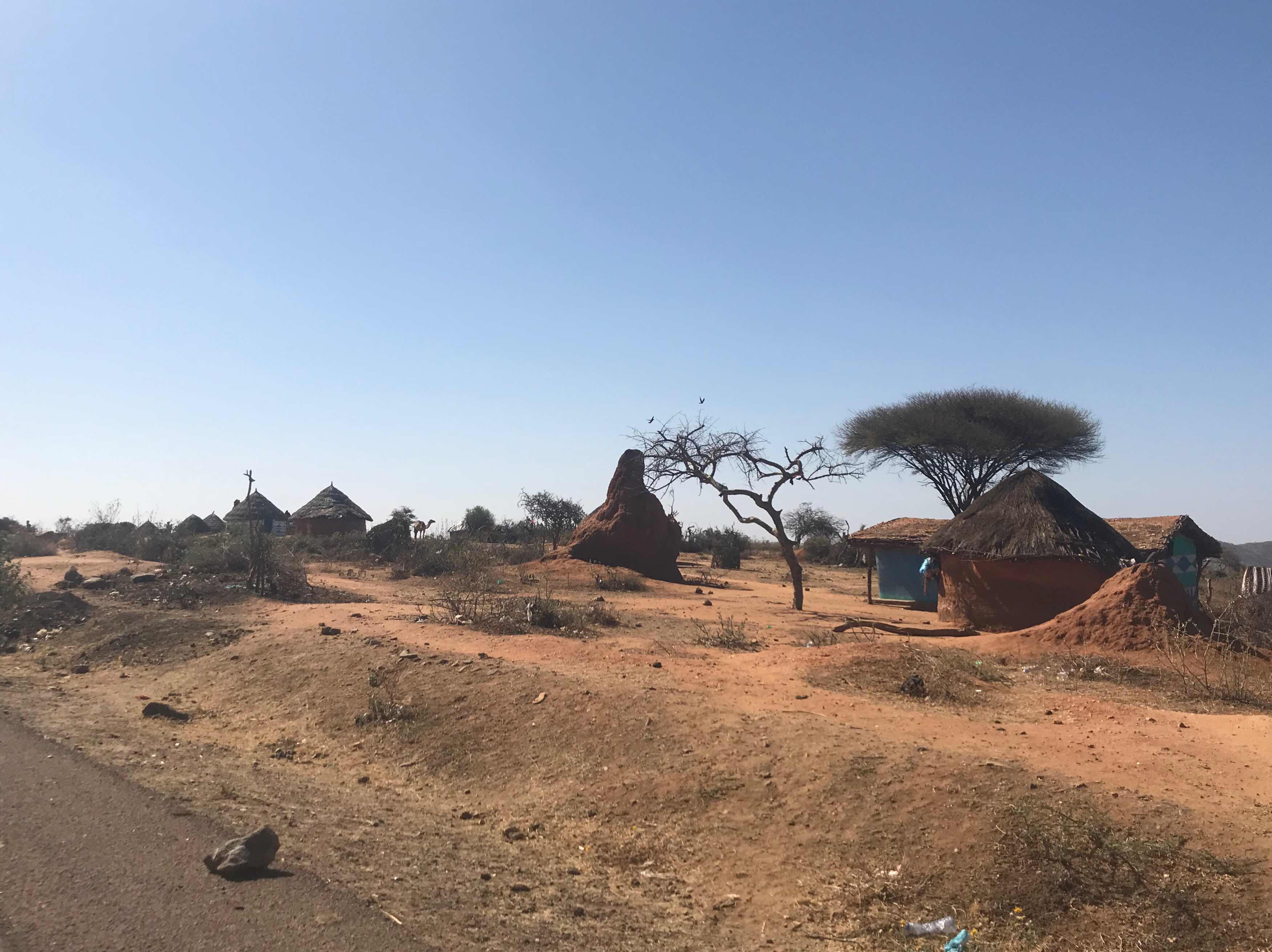 Termite hills higher than the houses! 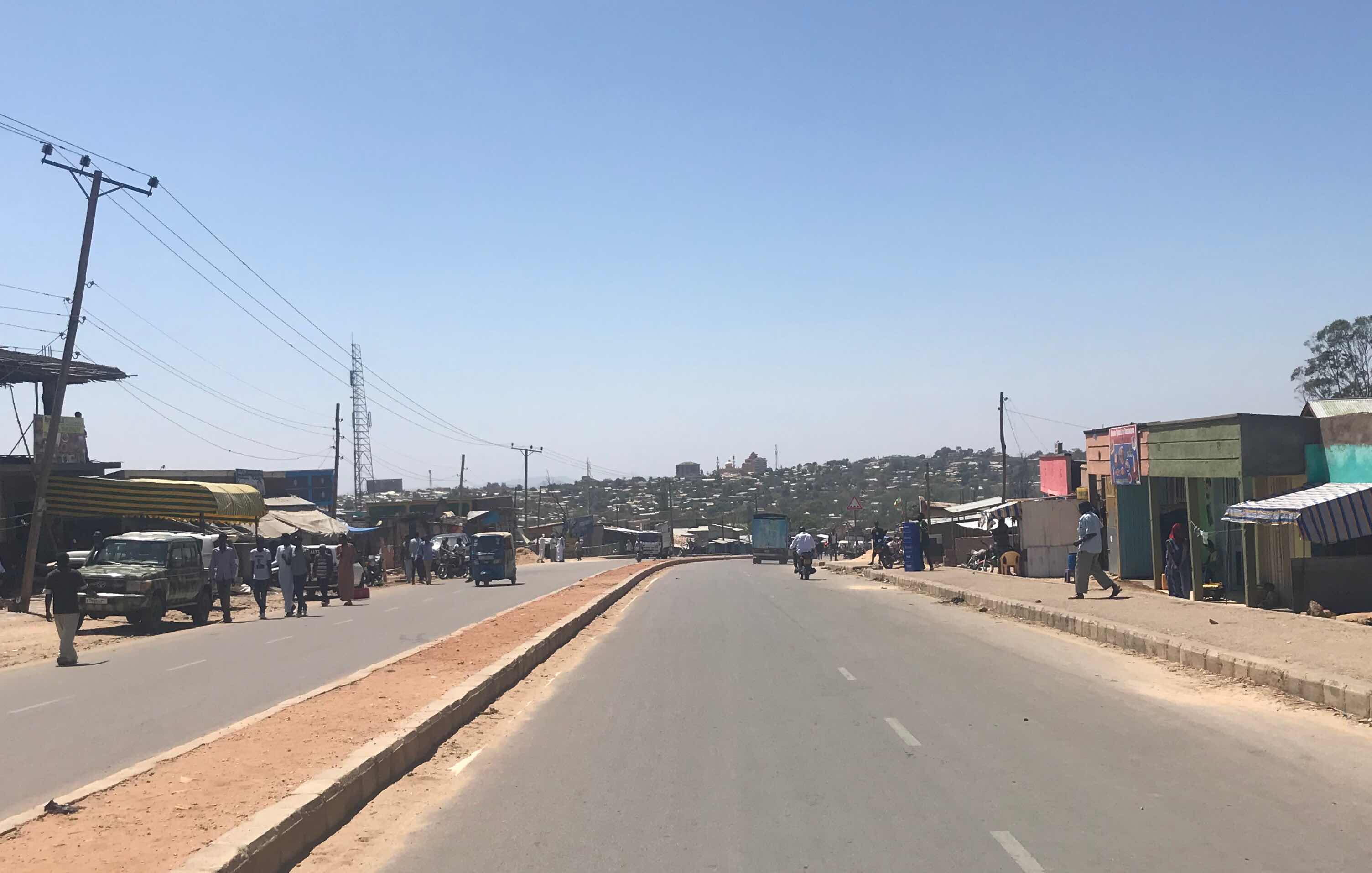