Yesterday evening was fun. A bunch of us stayed up late (830pm) and decided that as riders we should adhere to some kind of religion, so Ashley came up with Wellwheelism. It’s a polytheistic religion with multiple gods, including the god of wind and the god of happy-bum-roads. The big question was what offers we could make to please the god of wind. Suggestions included beans or peeing against the wind but we concluded that neither were actually worth a favourable wind…

At 830 we all went to bed (which is actually quite late for TDA standards). I had put up my tent behind an old stone wall so that it was out of the wind, meaning that I didn’t put the fly sheet on and that I could see the amazing night sky filled with stars from inside my tent. It was a good night!
Today were only 116k to Dongola. Some called it the Hotel Time Trial because there were only a limited amount of hotel rooms available for the two rest days that we will enjoy in this little town. Yesterday our local tour assistant had already composed a list with people who are interested in a room and I was somewhere on it, but the rumor went that whoever was first in camp would be the first to be eligible for a room. So i’m not quite sure what everybody thought when I was first to leave camp again 🙂
The morning stretch till lunch at 70k was fast. I rode with Frederic for a while and enjoyed the landscapes. Then enjoyed the camels that were at our lunch spot and took off again to finalize the last 40 something k, but the the legs just dried up, even despite the continueing tailwind. At 90k there were some Sudanese waving and chearing at what looked like a shop, so I stopped and asked if they had cokes. They did and while I was buying the cokes some 8 very curious kids showed up. I bought cokes for them as well and laughed and played a bit with the adults, who as always were very proud that I stopped at their shop 🙂
After that I finalized the trip and reached camp and found a Tuc Tuc waiting for me to bring me to the hotel. A few weeks ago all windows of the hotel were thrown in during one of the demonstrations and the windows are still broken 🙂 Besides this the hotel is operating at full capacity 🙂 After I sat in my room for a while and after the boiler had heated up I took a long shower and washed my sand and dust filled hair. The nice thing about the hotel room is that there is no one outside the door saying “geez what’s she all doing in there?” Washing the hair and getting all the knots out after 4 days of riding through the desert just takes some time….
After the shower I went downstairs and found Baldr and Fiona. We walked into town together but because it’s friday everything was closed. We bought some overdue chips with spicey ketchup flavour and then found a Tuc Tuc. We made the gesture for food and said “chicken” and the the guy drove us to a place where they sold chickens stuffed with rice, which was a very welcome meal 🙂
After lunch we went back to the hotel where I planned to take a nap, but I found that Jacky had found the room as well and that here bags had exploded. She was fumbling through her stuff and some people walked in and out and I gave up on the nap. I went to find Vikas in some kind of holiday park instead, which was a good place for food and drinks and talk.
I ended up having a real nice conversation with Vikas. It was so nice that I forgot about going out for dinner with Baldr at 700pm, which was not very decent of me. I feel pretty bad about it and hope I’ll be able to make it up to him tomorrow…
Tomorrow is a rest day. We’ll visit the pyramids at Jebel Barkel, which is about a 2 hour drive from Dongola. It will be good to be off the bike for a bit! We’ve done just a little less than 1700k untill now and with the favourable wind and good roads I guess it has been the easiest 1700k I ever did so far. The gods of wind and happy-bum-roads have been good to use so far! Days will become harder when the heat picks up though…. 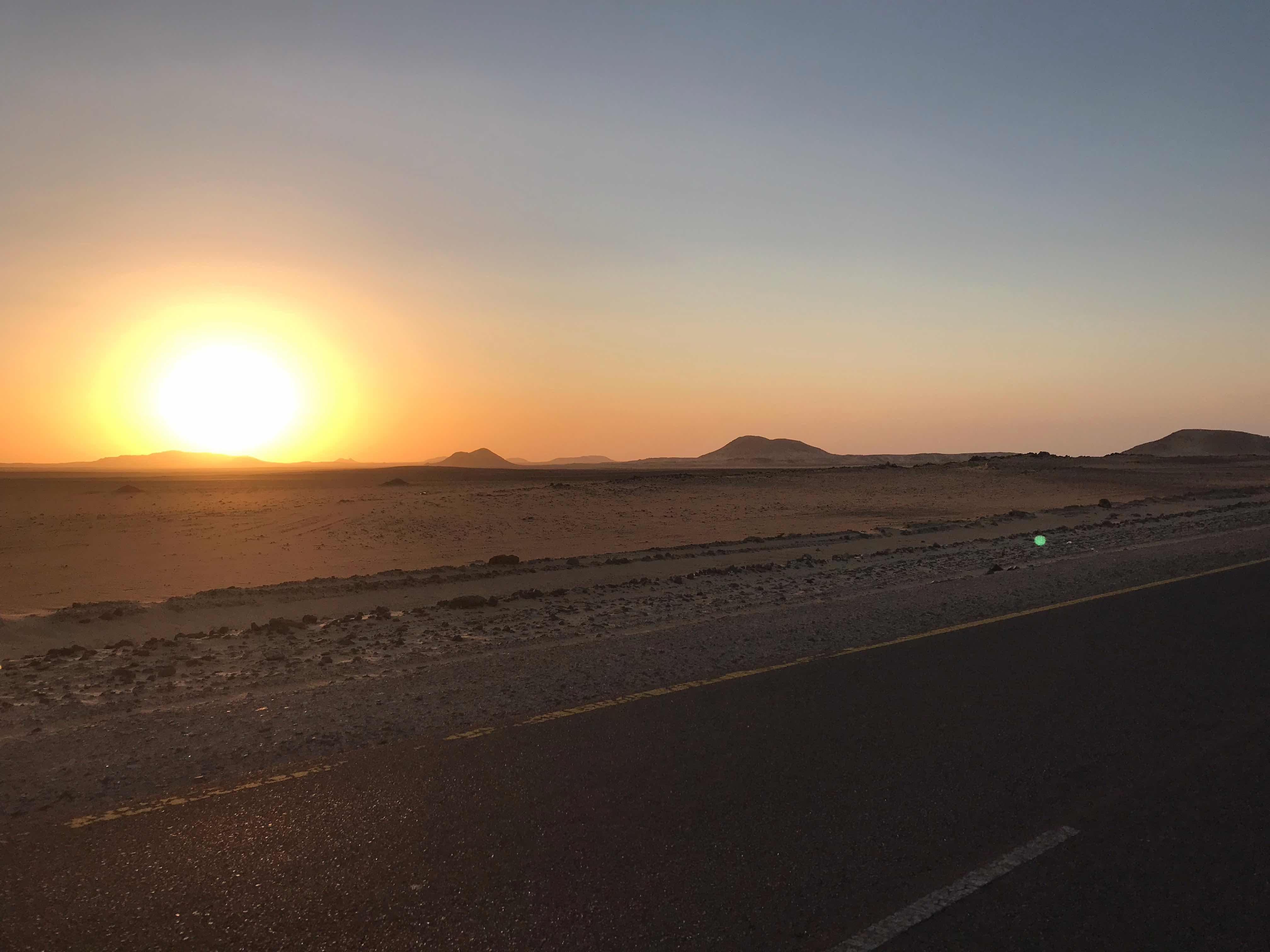 Sun rising over the desert at 630 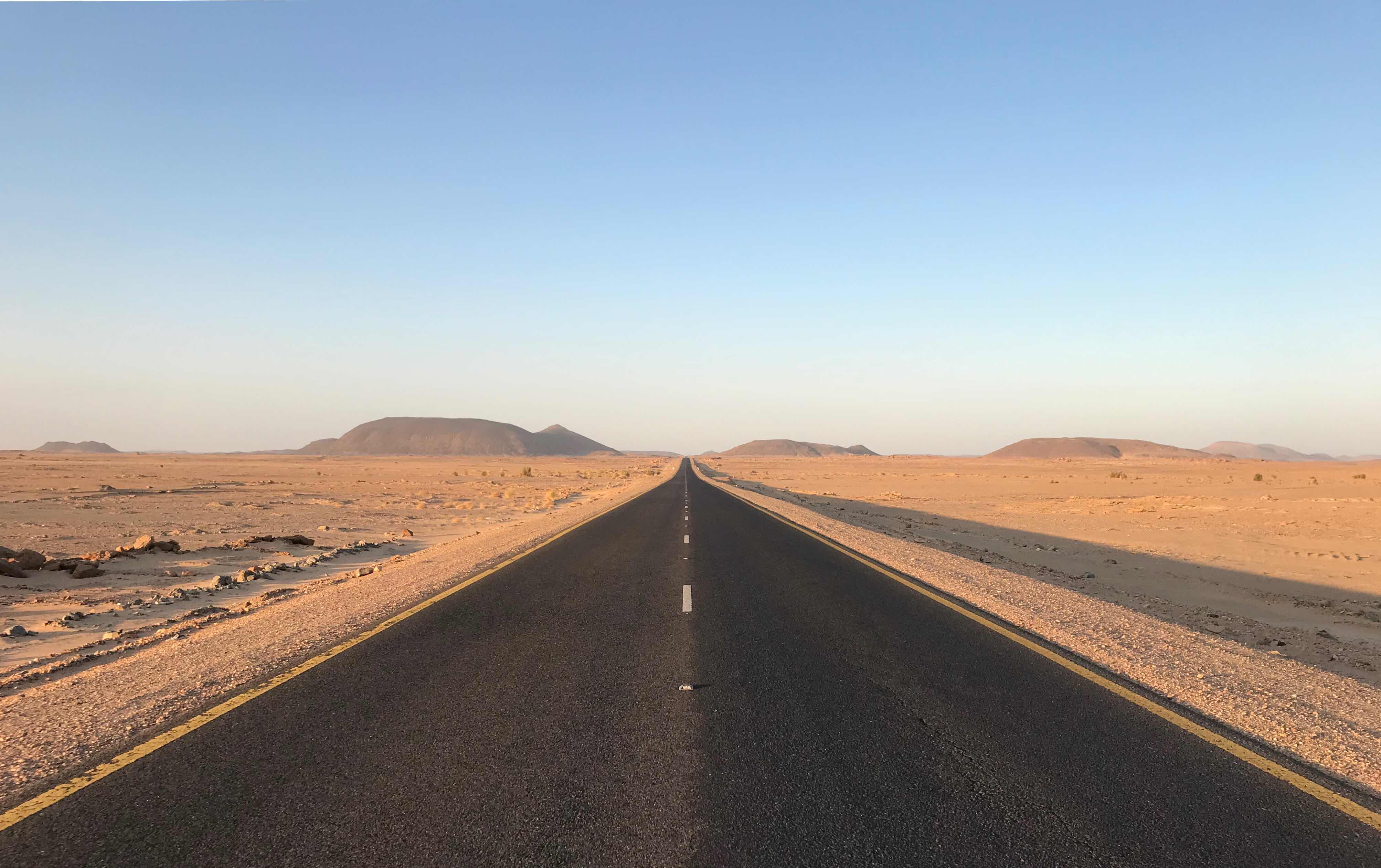 Long straight roads with the wind in our backs 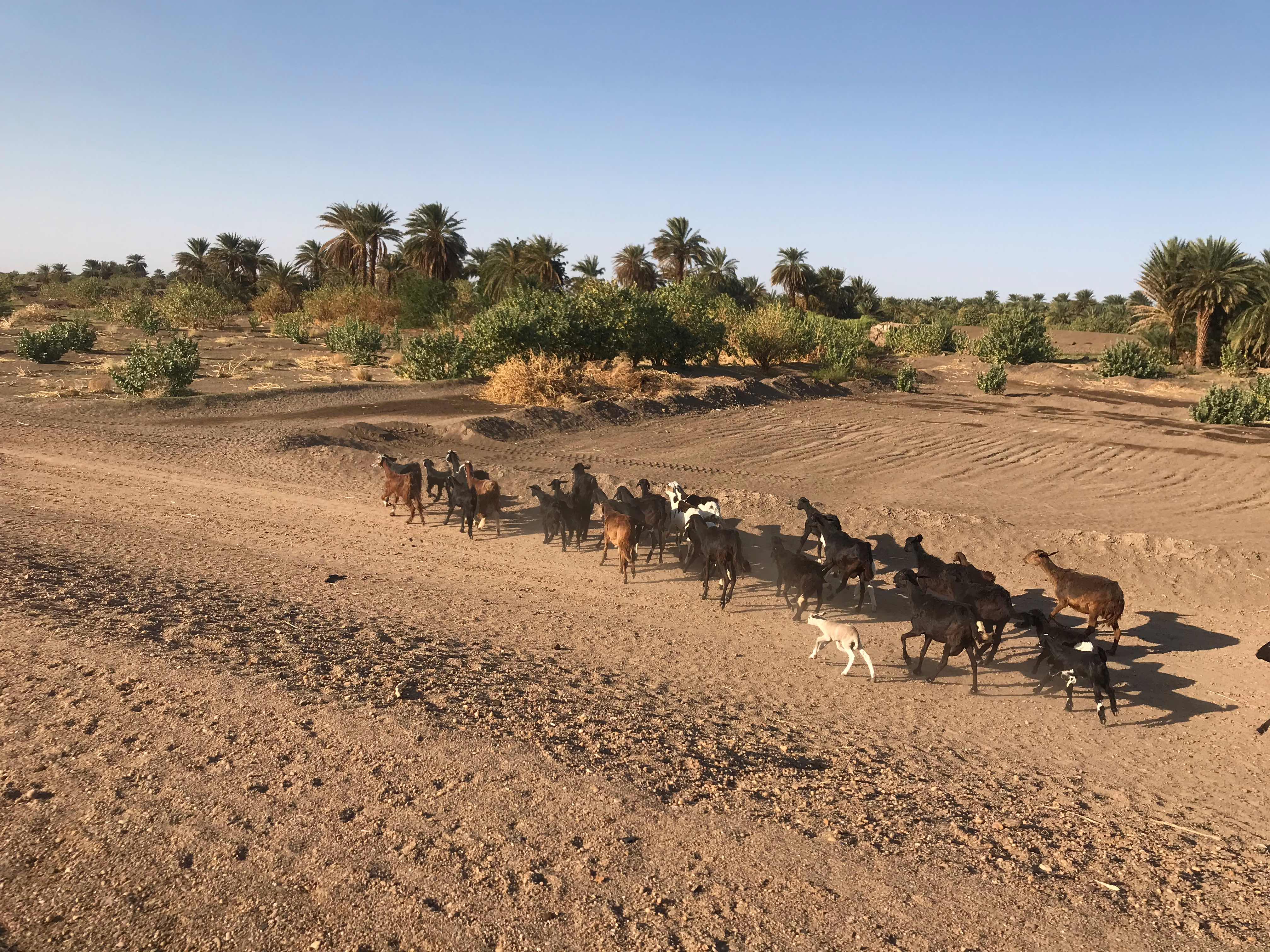 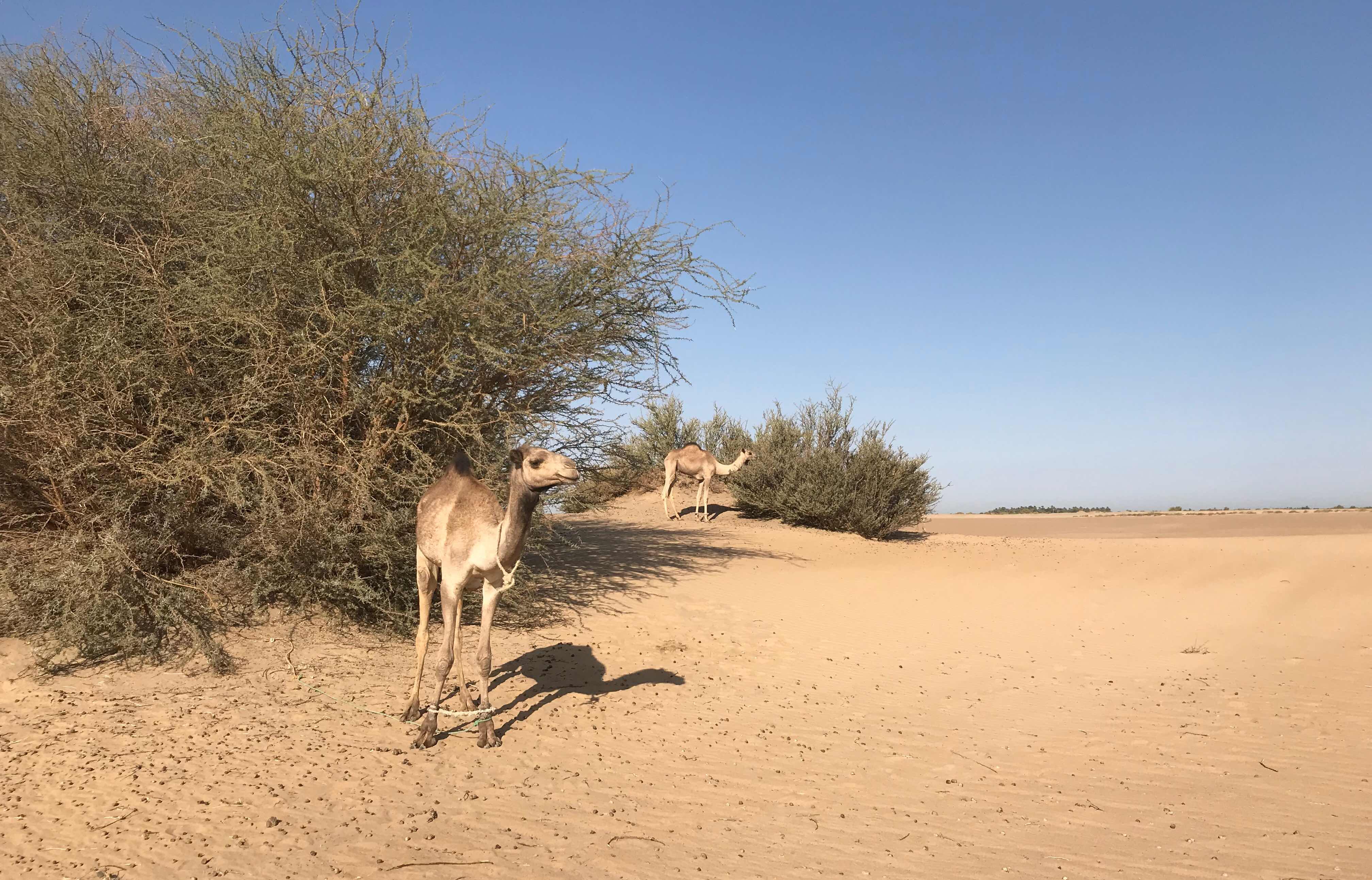 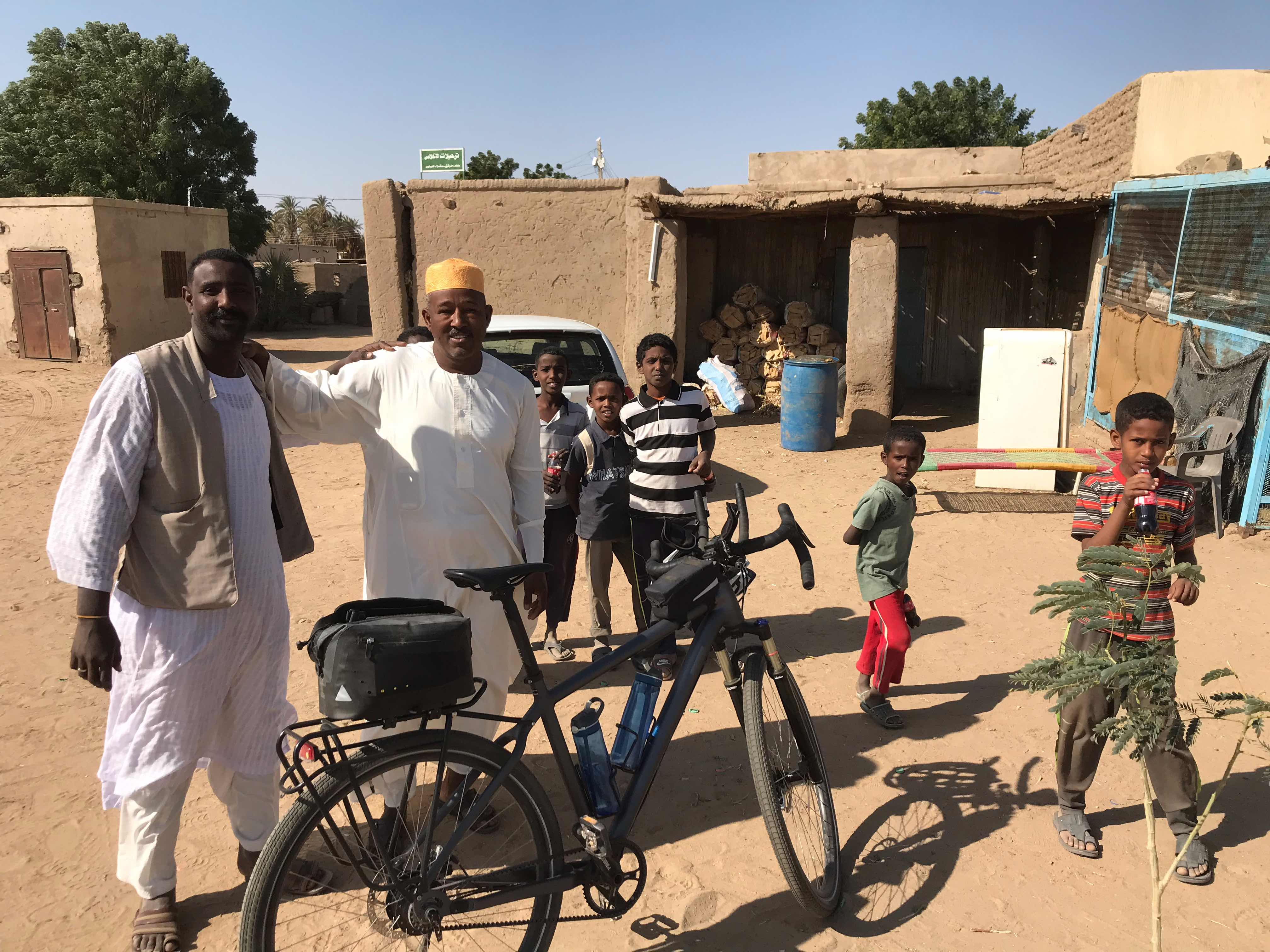 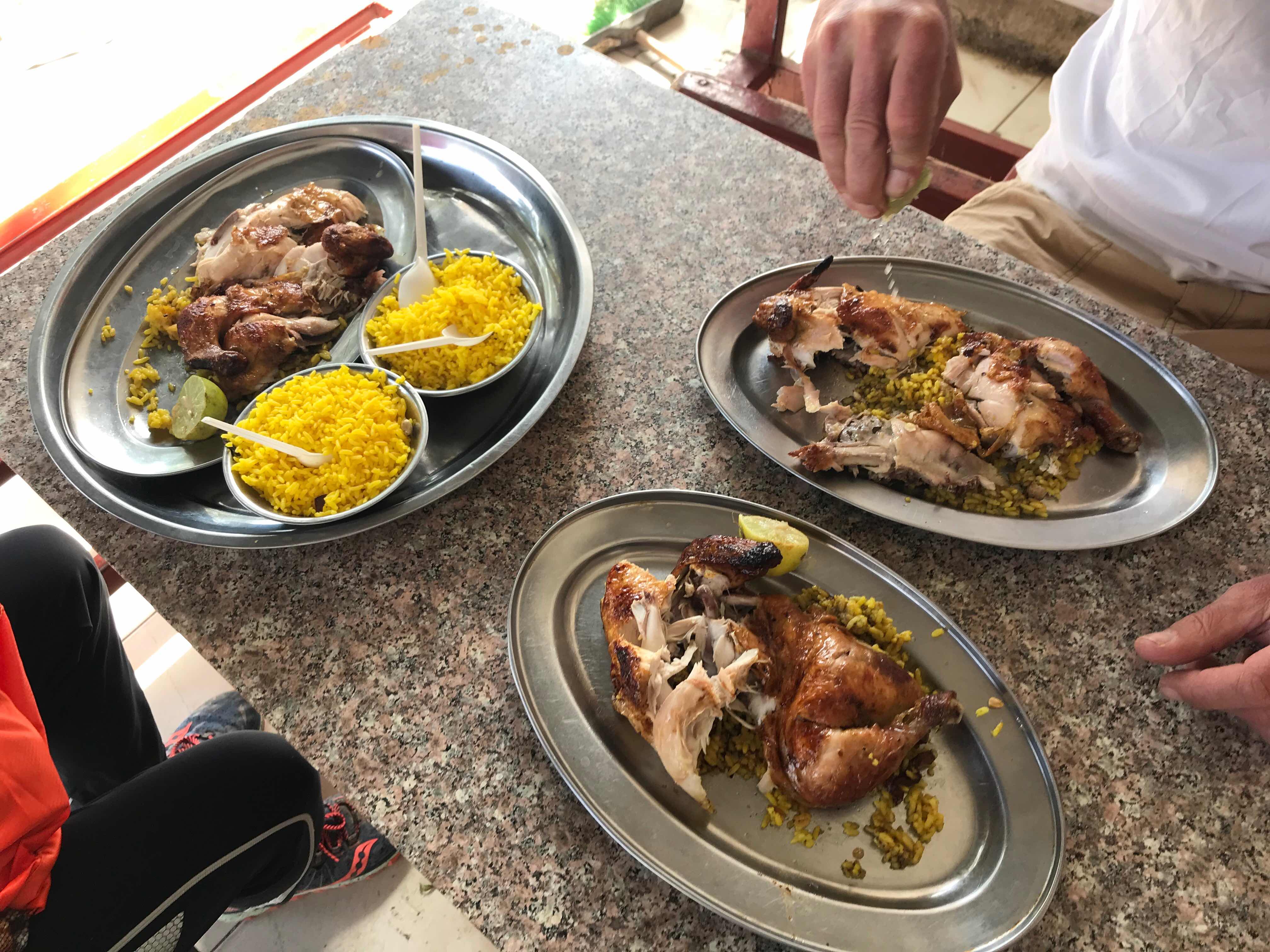