No morning prayers this morning. In the desert it is just quiet, except for the generator of the nearby Bedoeïns and their barking dogs. I just love my ear plugs. I didn’t hear a thing…

Today was a 150k ride. I rode 150k many times before,  but it’s still a distance that scares me. Just because it’s 150k. 150k is a long way which can go wrong many ways as well. Elevation, wind direction, temperature, road conditions: these are all factors that influence how hard or how easy the 150k are actually going to be. Today I had a bit of an idea on the elevation and some idea of the road conditions and the temperature. The big unknown today was the wind. Yesterday evening some riders proclaimed that we would have a tail wind all the way to Abu Simbel, but with a 150k ride I just can’t assume that unless it is very obvious. 150k humbles me.
For that reason I started out very easy this morning. I took of with Alex, Loraine, Richard and Jerome but discovered very fast that my legs had to work too hard to keep up, so I fell back to ride my own pace. Some 30 minutes later I overtook Paul and Fiona and found that they were riding a comfortable pace, so I rode with them, feeling well. Then, after about 50k, out of nowhere, we were hit by a severe cross wind which worked against us. Fiona and Paul struggled a bit so I let them draft behind me till lunch.
After lunch the cross wind had turned a bit and was now a bit in our advantage. I had Richard and Alex drafting behind me. After 17k the road turned and the cross wind became a tailwind, which was amazing! The wind was blowing all the desert sand across the road like snow and we were riding 45k per hour. At the downhill parts we made 65k per hour. I just can’t ride any faster because I run out of high gears 🙂 The last 60k were gone in no time 🙂
Tomorrow we’ll have a rest day in Abu Simbel. Unfortunately there are no hotel rooms available, so I’ve put up my tent and suck it up (fortunately I wasn’t bummed out for too long). I had a good shower though, which was really nice! After four days of riding my hair felt like rope 🙂
For some reason French President Macron was in town today, causing all shops to be closed untill 530pm. Baldr, Vikas, Jacky and me found a coffee shop though, which was pretty nice! After that we went to a little restaurant where they had fried Nile fish, but after we’ve ordered the place was soon taken over by other TDA’ers, which was less nice. Other negative side effect of all these TDA’ers was that prices for the fish skyrocketed. After the fish place we move to a falafel place with no TDA’ers, wich was nice again.
Yesterday no internet in the desert. Today barely any connectivty in Abu Simbel, meaning that posts will be delayed a bit.
We’ve passed the 1120k mark, meaning that we’re down 10% of the distance and completed 1 of 10 countries! After our restday in Abu Simbel tomorrow we will cross into Sudan! Let’s put that Visum that suposedly was so hard to get to use! 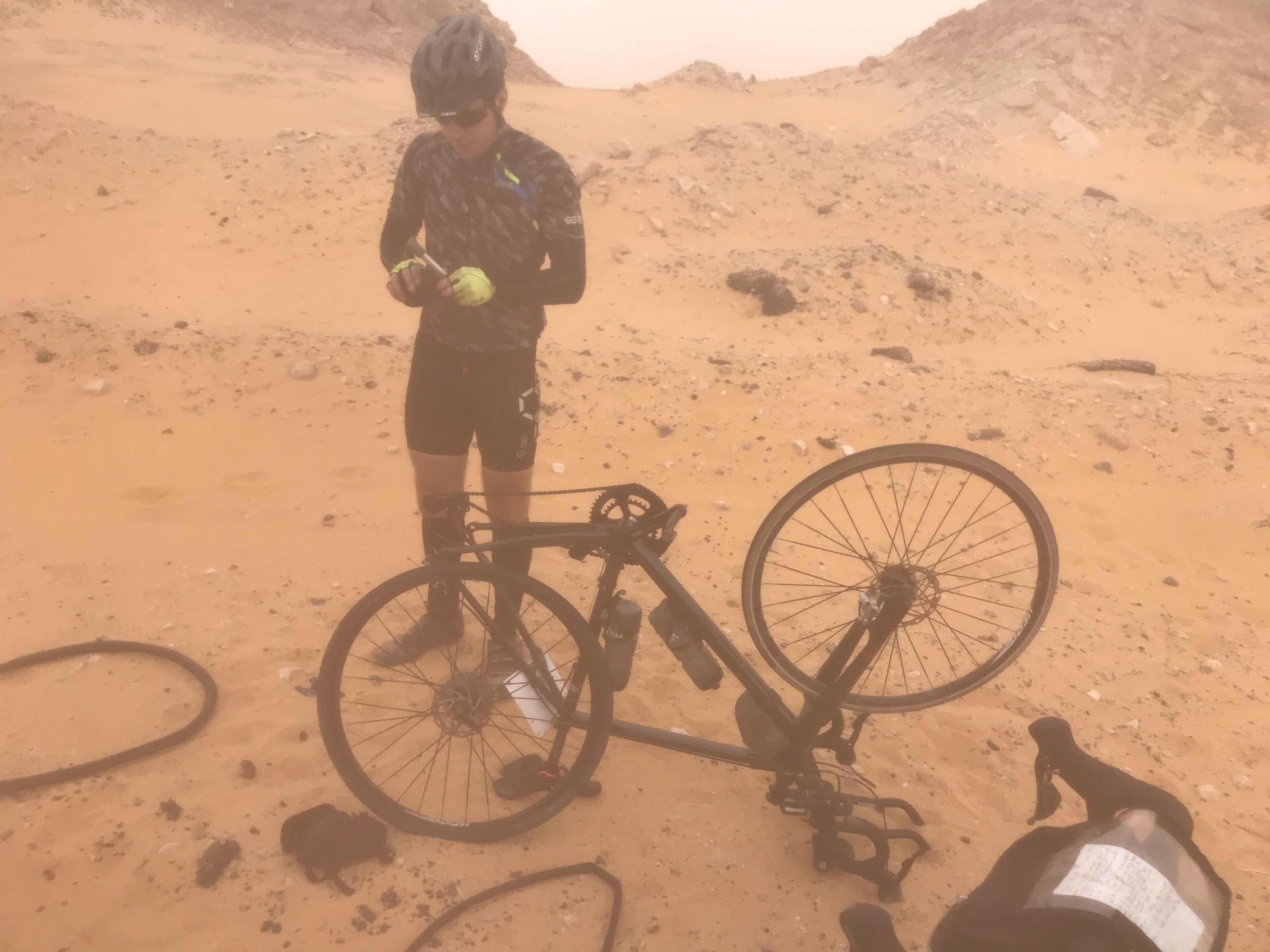 Flats / Punctures! My tyres are still keeping up (fingers crossed it will stay like that) 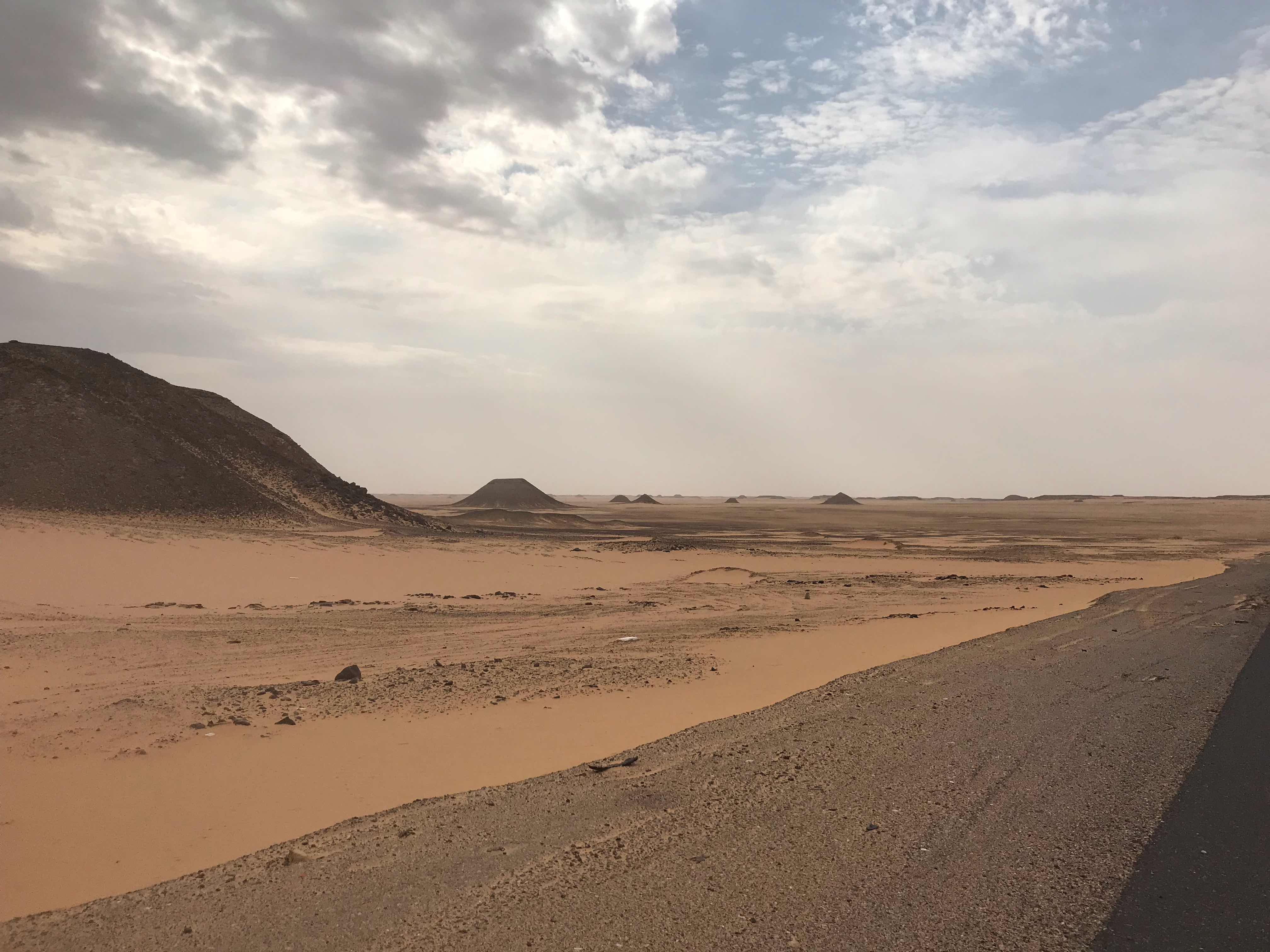 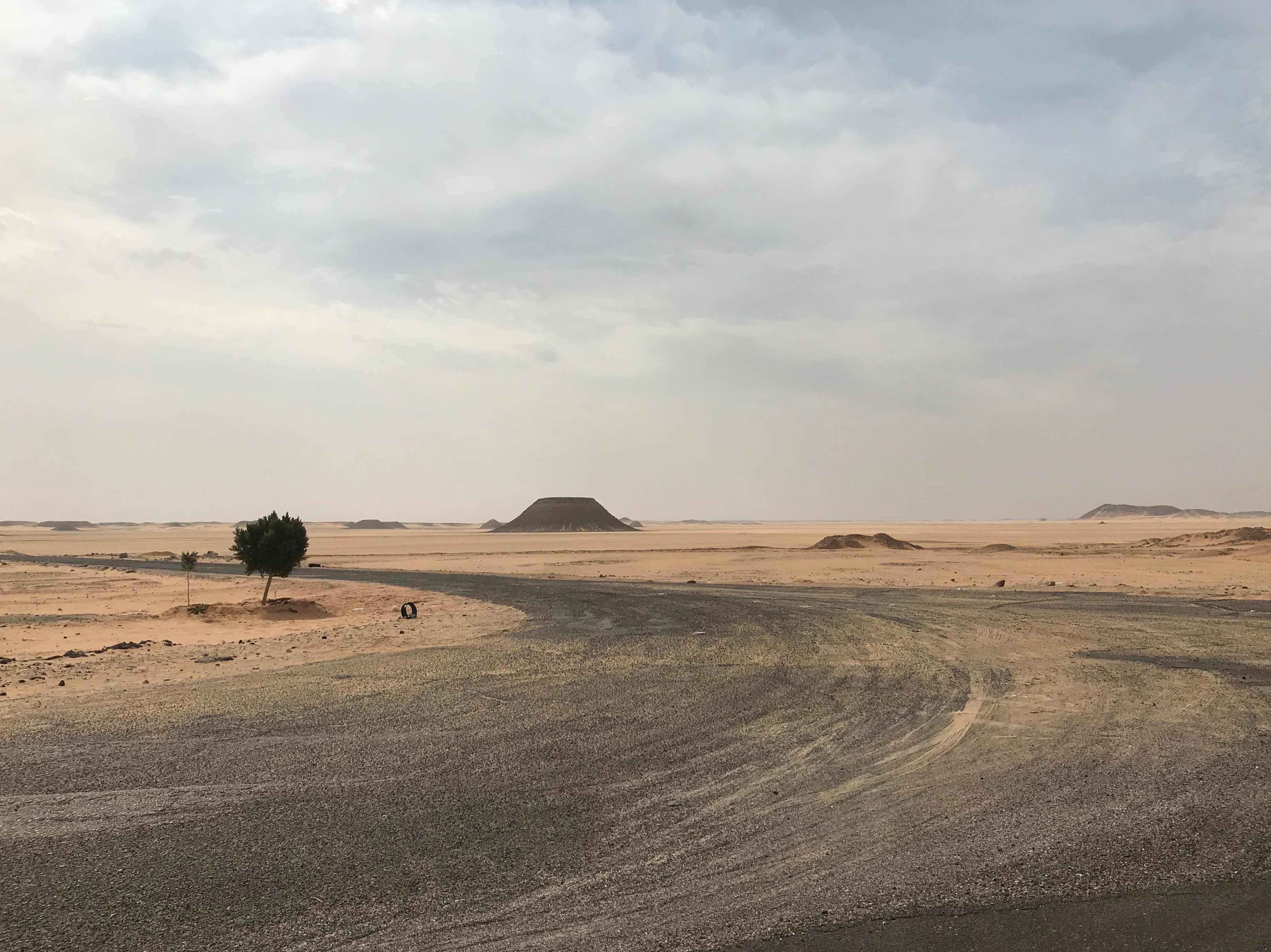 A little tree! In the middle of nowhere! 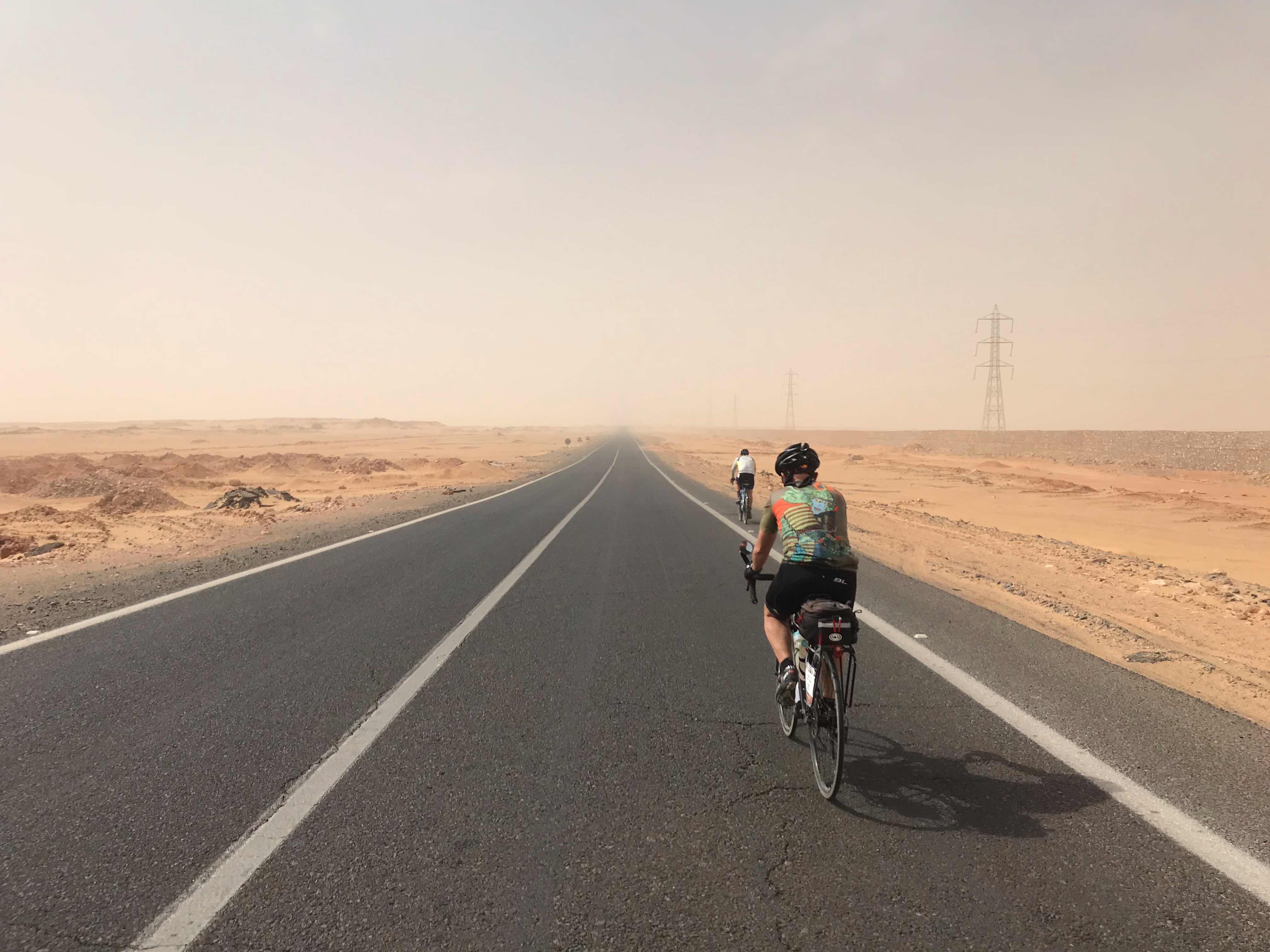 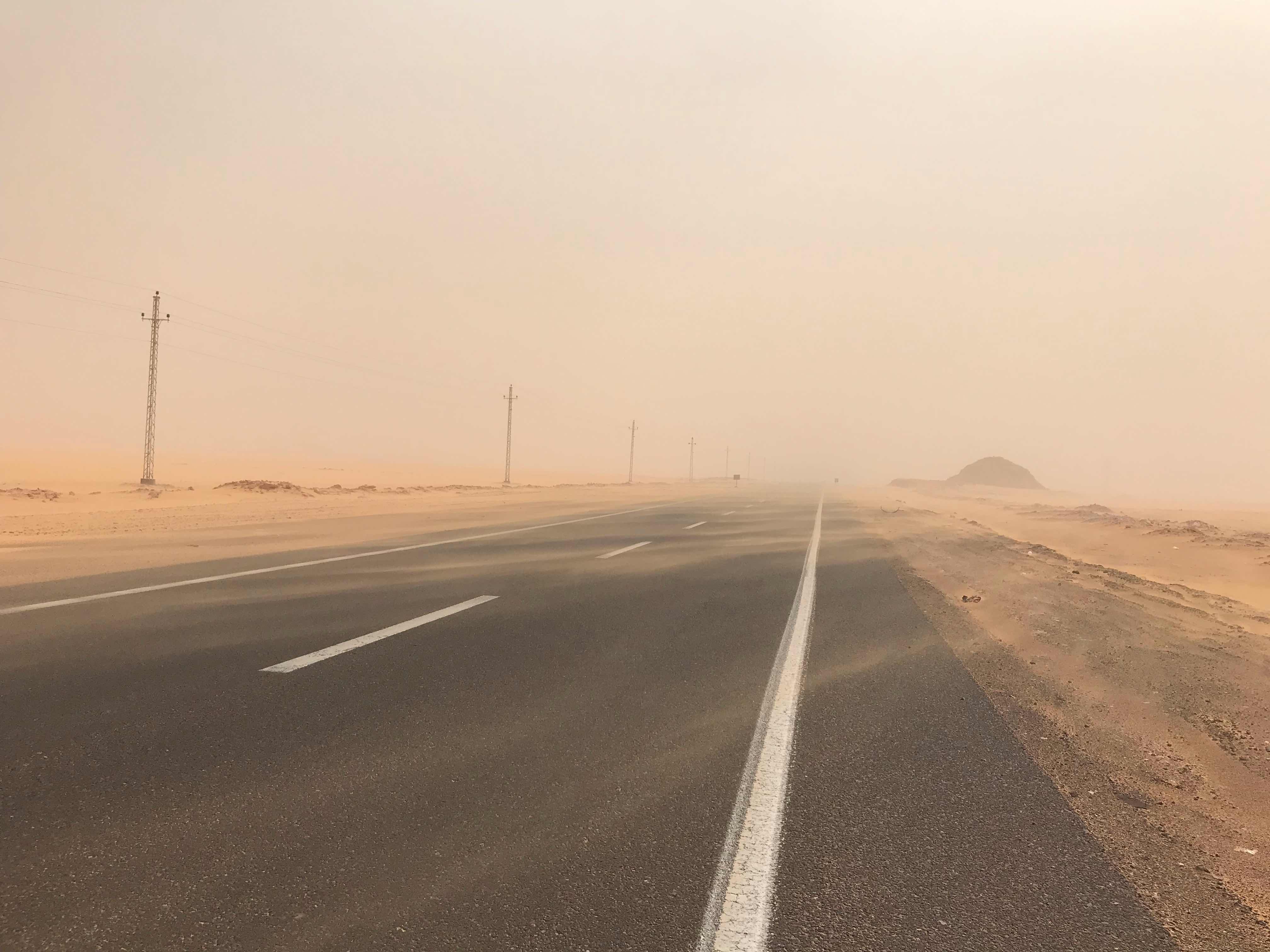 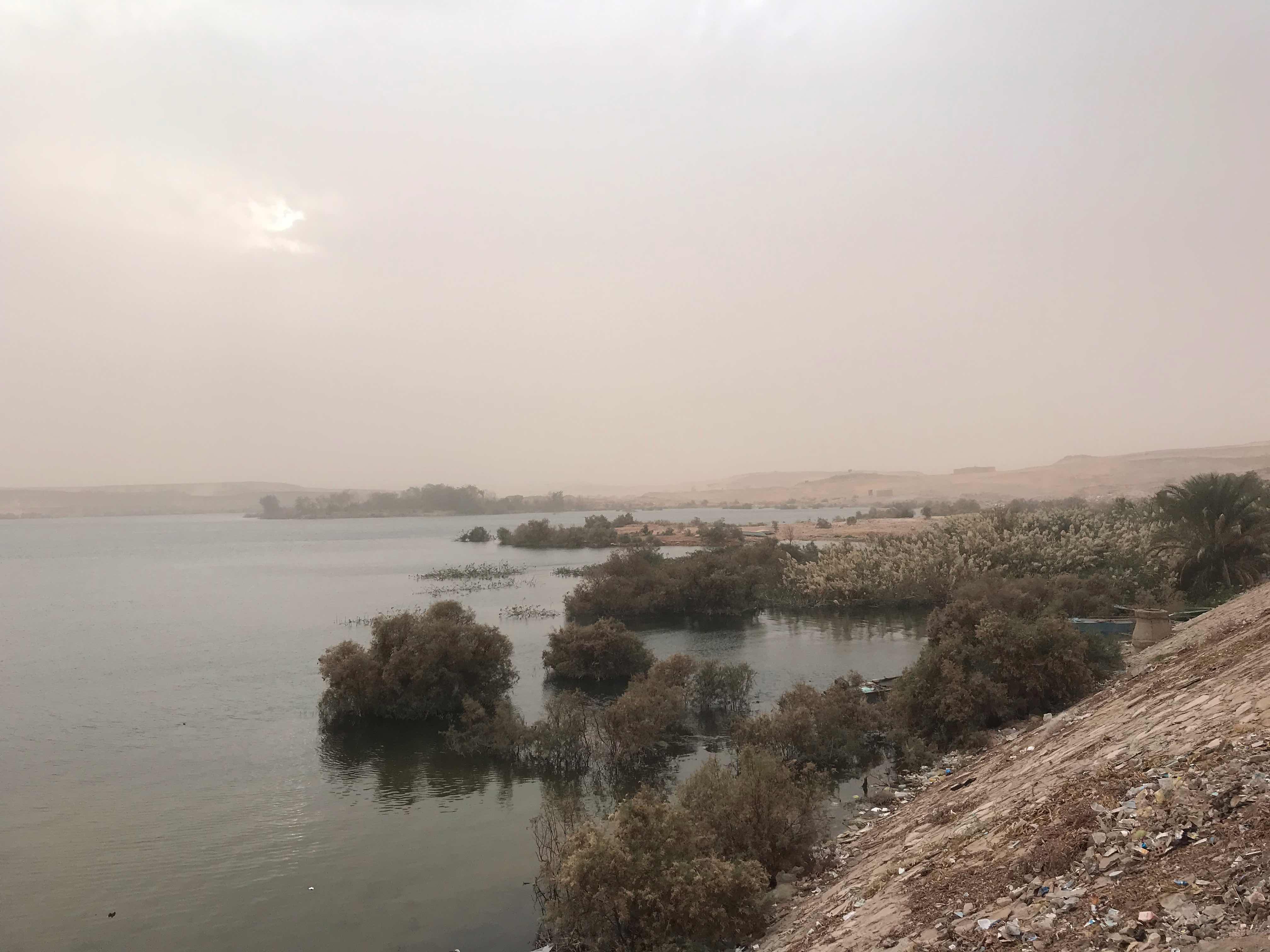