After 6 days of quite intense cycling, my buttocks were pretty happy that they were separated from my saddle today. And the rest of my body didn’t mind not riding either 🙂 So today I had some time to explore Ba Be lake and the surrounding national park. The Americans told me yesterday that the best way to do that was by boat, so at around 830 i found myself sitting in one, together with someone who would navigate it accoss the lake and the nearby river!

The lake and the river are both surrounded by high and steep limestone walls covered in old rain forrest vegetation, which this morning disappeared into the clouds. There are a very limited amount of roads in this area and the roads that are there are rugged and narrow. And knowing that the lake measures about 7km from north to south, you get some idea off how remote this beautifull area feels. And for someone born and raised in the Randstad, that’s quite exciting!

After 7km on the lake we reached the Nang river, which is one of the rivers filling the lake. We followed the river up stream for a while untill we reached Động Puong, which is this enormous cave through which the Nang river passes the limestone rock. The cavern was truly spectacular. A cathedral of nature and home to this big colony of bats which you could here squicking from the darkest corners of the cave…

After the visit to the cave we returned on the river, following it downstream, until we reached a traditional Tay village. From there it was only a short walk to the Đầu Đẳng waterfall. At this place, the calm Dang river turns into this wilde roaring mass of water that crashes down some hundred meters over a length of about a kilometer. Amazing, but probably I’m a bit spoiled by all the Auzie waterfalls I’ve seen two months back. So it was okay and absolutely not something you see everyday 🙂

After the waterfall I had lunch in the Tay village, after which we left to a cute little foodmarket near the fairy pond. Again I was the touristic highlight of the day and about 20 crazy Asians wanted to take a selfie with me. So I let them and talked a bit about Holland, Gullit en Bergkamp.

After the fairy pond it was time to go back to the homestay. It was a pretty amazing day with 0km on the bike and 0 meter elevation gain 🙂 Furthermore, today has inspired me to take an adventurous shortcut tomorrow. During today’s trip I found out that from the Tay village there leads a 2km road to the main road that leads through quite a flat valley and which does not show on all maps (maps are actually quite bad here). Even if its a really bad road, its only 2km. By taking the boat back to the Tay village together with Smurf I can skip about 32km of cycling (of which I’ve already seen about 20km during yesterday’s trip) and more importantly: I will be able to skip one of 2 approximatly 400meter high and quite steep ascends. In total I will be able to skip about 700 to 800 meters of elevation gain, which is more than oke, taking into account the last 6 days and knowing that there is plenty of climbing left to do!

So I’m really looking forward to put the bike on the boat tomorrow! 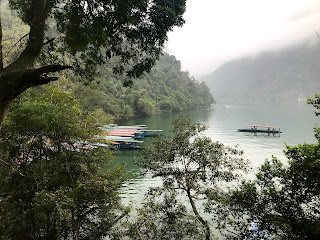 The boats… one of them ready to take me on board for the day! 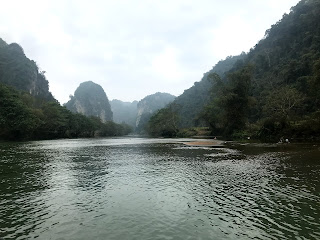 The views from the lake and the river were again pretty amazing! 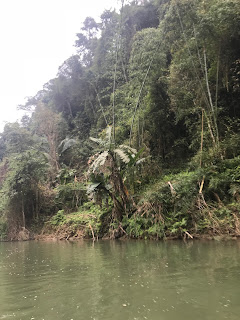 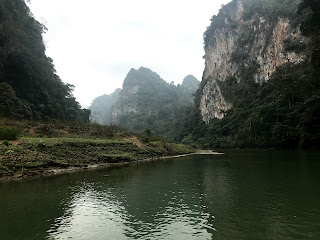 These massive rock formations, crested by the force of the water… 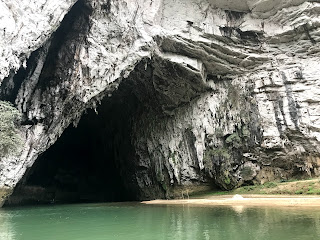 As is this immense cave. The water just went straight through the rock… 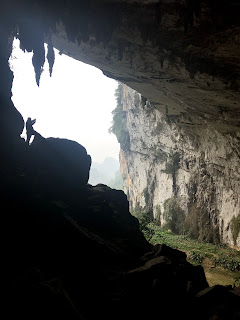 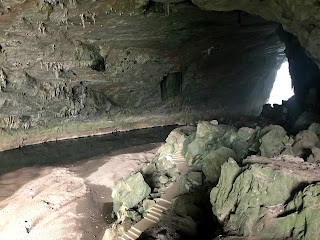 Please note the little person in the bottom left corner. 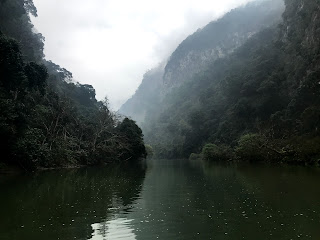 So no dinosaurs… but how about gorillas in the mist? 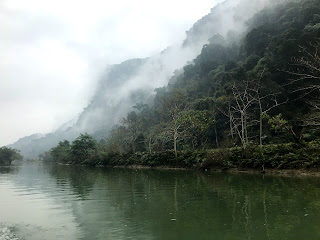 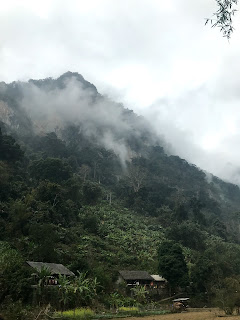 And amongst all this beauty live three different traditional ethnic minorities, their way of life protected as part of the enironment. 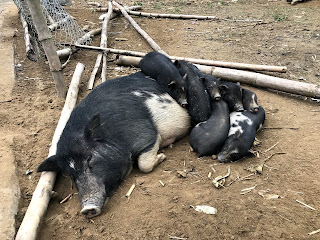 And they live together with momma pig! 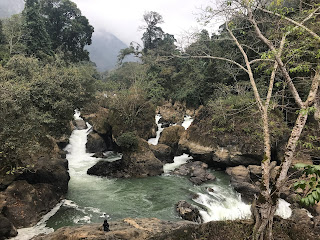 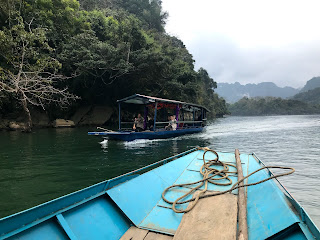 And after the waterfall it was time to stear the bright blue boat back to the homestay. Whata wonderfull day!